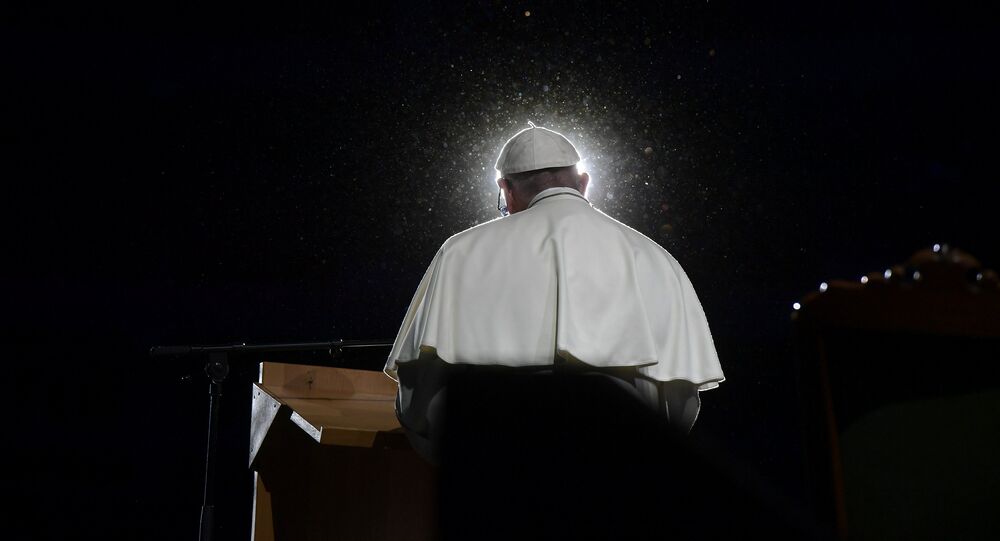 The late Pope Paul VI and murdered Salvadoran Archbishop Oscar Romero, notorious icons of the Catholic Church whose life and works caused deep division among the hierarchy of the faithful, were canonized by Argentine-born Pope Francis on Sunday.

© AP Photo / Alessandra Tarantino
Gay Man Says Pope Told Him 'God Made You Like This and Loves You Like This'
During a high-level church ceremony attended by an estimated 60,000, the Pope wore Romero's blood-stained rope belt, in commemoration of the latter's slaying while performing mass at the altar.

In the course of the ceremony, Pope Francis displayed Pope Paul VI's staff and chalice as a living reminder to "a poor church for the poor," according to Japan Times.

Enormous images of the two were unfurled on the outside of St. Peter's Basilica alongside five additional new saints, including two Catholic clergy members of the past 300 years, an orphan child of the 19th century, as well as a 20th-century and a 19th-century nun.

Romero's contribution to humanity included risking his life in the face of government repression to stand up for the rights of peasants in El Salvador. He was assassinated by a Salvadorian-born, United States Department of Defense-trained intelligence operative in 1980.

Pope Paul VI was, among other notable actions, the first Catholic Pontiff to visit Palestine, Jordan and the city of Jerusalem, a notable event in 1964.

Romero's ascension to Catholic sainthood remains a hot-button topic in El Salvador to this day, according to the Jesuit weekly America.

"It was like a dagger to the heart. I received threats," noted Archbishop Vincenzo Paglia, who guided the process of Romero's canonization, cited by Japan Times.

Pope Paul VI was known to have encouraged Romero in demanding rights for the poor and uneducated in the tiny Central American country, a move that caused many a raised eyebrow among church leaders at the time.

Paul — who famously rejected the trappings of luxury provided by the second richest religious group on Earth — was also the first Pope to seek reform of the powerful Vatican Curia, a Catholic church governmental Cabinet, a work that Francis has continued.

The now-elevated Saint Paul is perhaps most notorious for reinstating the hated Catholic ban on the use of birth control — even though his advisors overwhelmingly voted against the move — enraging Catholics worldwide.