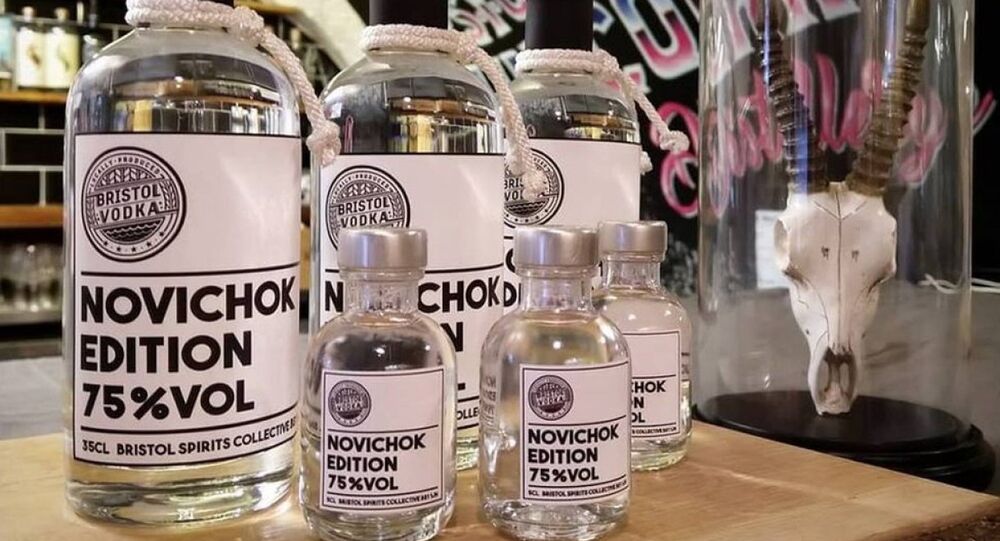 Bristol Dry Gin has drawn much criticism in the UK after it released a 75 percent proof limited edition vodka named after nerve agent Novichok – which sold out within hours. Sputnik has reached the beverage producers to find out more.

“Our aim was simply to poke a little fun at a situation which has created a tense atmosphere in this part of the world. We released the product before Dawn Sturgess passed away, when we had every expectation that she would recover. Our thoughts are with Dawns family at this very difficult time, and we have apologised for the unfortunate timing of this products release,” Bristol Dry Gin said in a written interview with Sputnik.

The release of the Novichok Vodka came a day before 44-year-old Dawn Sturgess died after allegedly being exposed to a toxic substance in the city of Amesbury – which the authorities initially claimed was the one that was purportedly used against the Skripals in Salisbury.

Our new limited edition vodka is out! Set at 75%, this smooth drinking spirit is no laughing matter. Available as a 35cl bottle, perfect for manbags and gym bottles, or as a pack of three 5cl minis, a great solution to body cavity searches. Get em from our web store or distillery. #bristolvodka #vodka #strongvodka #bristol #wheatvodka #bartenderlife #cocktails #cocktailbar #limitededition #booze #vodkacocktail

Sputnik: Did you anticipate that the drink would get such feedback? What were you expectations?

Bristol Dry Gin: No, we initially only produced a small run, which was to be marketed to our core customers. People who know us, appreciate a bit of fun, and appreciate a good spirit. We are a small micro-distillery, in a small European city renowned for its independent business, its graffiti artists like Banksy, and its liberal but slightly subversive character.

We expected to get told off by our partners when we got home, which happened, but also got an incredible amount of national and international press… which got us reprimanded at home once more.

Of course we regret that it has caused some offence, but the overwhelming majority of social media users have given a positive reaction, and presumably appreciate a little dark humour.

How popular is the beverage amongst customers?

Bristol Dry Gin: Novichok Edition was a limited edition product. The initial production run sold out within an hour and the second, larger run, almost as quickly. Those customers who were lucky enough to get a bottle have loved it and have asked for more.

We have been inundated with requests from all over the world, including a large number from the Salisbury area, to produce more. Its great that so many people understand that the Vodka is designed to raise the sprits not cause division or offence.

Do you plan on releasing the same drink but under a different name?

Bristol Dry Gin: We are going to continue to make limited amounts because of an email we received yesterday from a member of the team that helped to clean up the areas affected by Novichok. He appreciated what we were doing and appealed for a couple of bottles for him and his team to enjoy. We are going to distil another batch and send a case to these courageous men and women to show them how much we appreciate their work, and make some available to the public.

What are your thoughts on the media hype surrounding the Novichock Nerve Agent?

Bristol Dry Gin: It is a very serious situation, and our knowledge of chemicals centres mainly around those used socially and legally. We have received many messages from the community in and around Salisbury, and members of the emergency services working in the affected areas, and can confirm that they are dealing with these dark times with good humour and a good cup of tea, or Novichok Edition vodka if they managed to get one.

In late June, Dawn Sturgess and her partner Charlie Rowley were found unconscious at his home in Amesbury, with detectives being unable to confirm whether the toxin they were allegedly exposed to was the same as the one that was purportedly used against former Russian spy Sergei Skripal and his daughter Yulia in Salisbury in March. Sturgess died in a local hospital one week later, while Rowley regained consciousness and is no longer in critical condition.