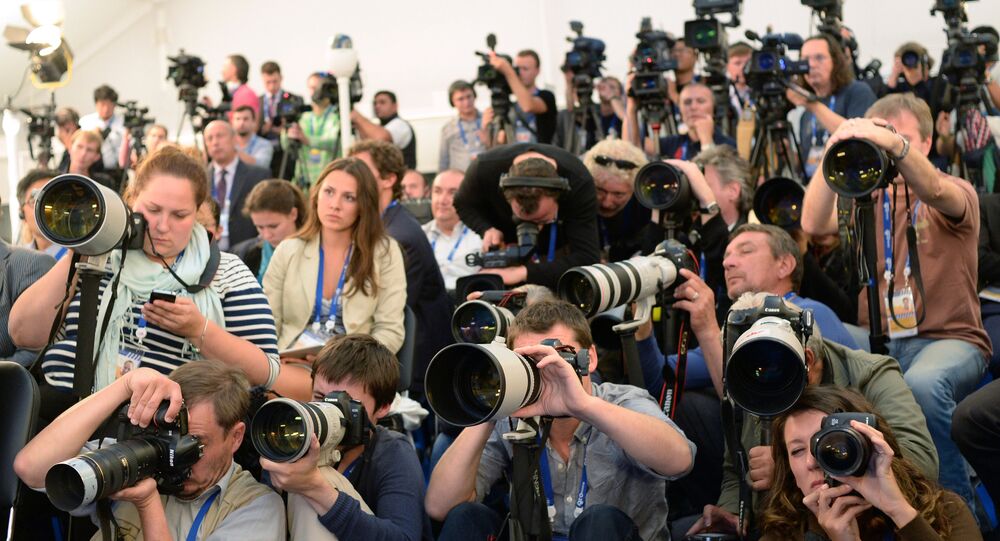 Ukrainian authorities on Thursday blocked the operation of Rossiya Segodnya International News Agency on the country’s territory in a move which Moscow and the international journalistic community have denounced as another step in the censorship and intolerance campaign against an alternative viewpoint.

Earlier on Thursday, Rossiya Segodnya was included in Ukraine’s sanctions list for three years, with the agency’s assets and websites blocked. The restrictions also apply to the RIA Novosti Ukraine portal, whose head, Kirill Vyshinsky, was arrested in Kiev earlier in May, and Россиясегодня.рф, Sputniknews.com, Ria.ru, Rsport.ria.ru, 1prime.ru as well as realty.ria.ru websites.

PHILIPPE DESMAZES / AFP
CPJ Calls on Kiev to Cancel Ban on Russian Media
Kiev has repeatedly limited the activities of Russian news outlets and journalists in Ukraine. In March 2015, Kiev published a list of 115 Russian media outlets, which could be denied or temporarily suspended accreditation by Ukrainian authorities as the outlets "posed threats" to national security. As the regulation came into force, a number of Russian journalists and television reporters were denied entry to Ukraine or deported to Russia, with a number of TV channels banned.

On May 15, 2018, the Ukrainian Security Service broke into the office of RIA Novosti Ukraine in Kiev. Its head Vyshinsky was detained on suspicion of supporting the self-proclaimed people’s republics of Donetsk and Luhansk, and treason. On May 17, a court in the Ukrainian city of Kherson ruled to arrest Vyshinsky for 60 days without bail.

According to the agency’s Director General Dmitry Kiselev, Kiev’s crackdown on freedom of speech looks like an attempt to "cleanse" the media space in the run-up to the presidential election in the country, scheduled for May 2019.

"This shows the powerlessness of the regime which came to power as a result of a bloody coup and failed to establish normal life according to modern democratic canon. There is nothing left for it to do apart from persecuting its own citizens, persecuting journalists, persecuting freedom of speech, ban respected outlets, and, possibly prepare for cleansing the media space ahead of the so-called presidential elections," Kiselev told Sputnik.

Journalistic Community Decries The Move As Act of Censorship

Though the decision of the Ukrainian authorities is yet to meet international reaction, the journalistic community has already issued its first comments on the issue.

The International Federation of Journalists (IFJ) has strongly condemned the move as an act of censorship, calling on Kiev to settle disputes with media outlets in court.

"The blocking of a media Website appears as a censorship decision which the IFJ strongly opposes. Recalling that press freedom is a key element of a well-functioning democracy. If there is any economic or industrial dispute between the Ukrainian authorities and Rossiya Segodnya International News Agency, it should be settled by an impartial court," the IFJ statement read.

"On behalf of the IFJ, I once again condemn the assaults on freedom of speech and media freedom in Ukraine, in general, and with respect to Russian journalists… [The blocking of news portals] is unacceptable and I urgently call on the Ukrainian president to allow access to these Russian websites in Ukraine," Bellanger told Sputnik.

"The politics should not interfere with the media’s [free] expression. I really hope that in the long run the media can express their own opinions freely… So, they have to change their own ideas, this is [political oppression] not fair. Different media should co-exist. Competition is a good thing, but if you impose your own ideas on other media or other countries that’s not," Li told Sputnik on the sidelines of the St. Petersburg International Economic Forum (SPIEF), when asked to comment on the situation with the Russian news agency.

© Sputnik / Sergey Pivovarov
Vyshinsky Should Be Swapped for Film Director Sentsov - Ukraine Security Service Head
The Russian Union of Journalists, in its turn, expressed regret over the shutdown of the news agency and vowed to appeal to colleagues across the world to pressure Kiev into reversing its decision.

"This is not the first time that the Ukrainian authorities have hampered the work of Russian journalists… This can only cause regret and outrage. We will appeal to all our friendly international journalistic organizations and ask them to comment on this situation. I hope that they will also demand that the Ukrainian authorities stop such actions," the union's chair, Vladimir Solovyev, said.

The Russian Foreign Ministry expressed strong outrage over Kiev’s decision, calling for an "immediate and tough" reaction of relevant international organizations, especially the Organization for Security and Co-operation in Europe (OSCE)’s representative on freedom of the media.

The Russian permanent representatives to the OSCE and the European Union, Alexander Lukashevich and Vladimir Chizhov, vowed to raise the issue of journalists’ rights in Ukraine at major international platforms, with the latter stressing that Moscow should not stoop to obstructing the work of Ukrainian media in Russia.

"I think that we should not stoop to this level. We will certainly continue to fight for the rights of journalists, including in Ukraine, including using international platforms, the Council of Europe, the OSCE," Chizhov told Sputnik on the SPIEF sidelines.

© REUTERS / Maxim Zmeyev
Freedom of Speech and Democracy, Huh? Ukraine Labels Foreign Journalists as ‘Accomplices in Terrorism’, Bans Entry
Following the announcement of the restrictions, the Russian upper house's information policy commission expressed an intention to discuss the issue at a special session with the participation of the Foreign Ministry's representatives, in order to provide a response to the systematic "manhunt on Russian journalists."

"Fear of unbiased information leads to bans and arrests of journalists… Ukraine seems to be the only country in Europe, which is blocking websites operated by foreign state information outlets," Oleg Morozov, a member of the Russian upper house’s International Affairs Committee, told Sputnik.

He also noted that the move had showed Kiev's political weakness and failure to compete in the media space.

Franz Klintsevich, a member of the Russian parliament's upper house Defense Committee, noted that Ukraine was becoming a leader in terms of media pressure. Kiev may be left with no media outlets which express views that are somehow different from those of the country’s authorities.