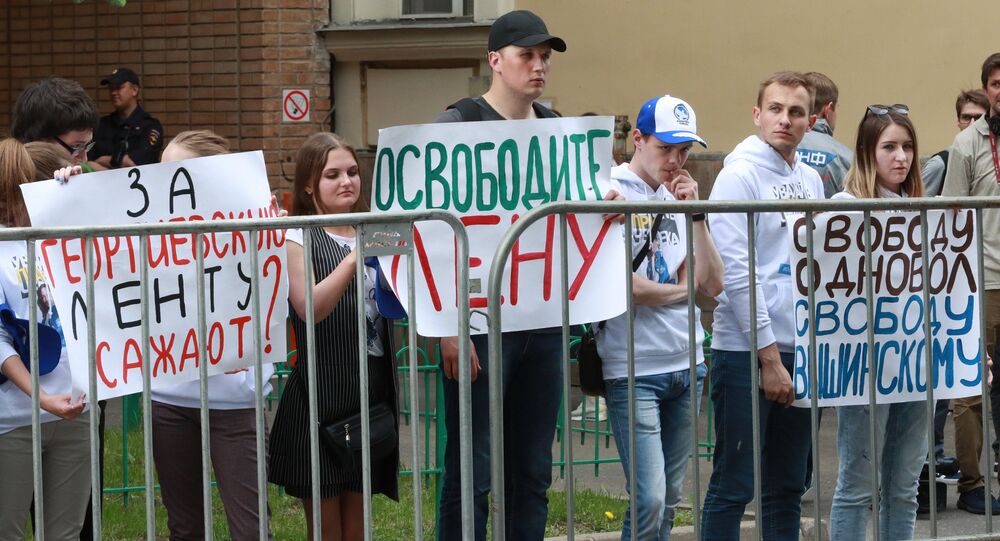 On Tuesday, head of RIA Novosti Ukraine news portal Kirill Vyshinsky was detained by the Ukrainian Security Service in Kiev on charges of treason. On Thursday, a court in the Ukrainian city of Kherson ruled to arrest Vyshinsky.

People have gathered in front of the Ukrainian embassy in Moscow to express their support to Kirill Vyshinsky.

Margarita Simonyan, the editor-in-chief of the Rossiya Segodnya International Information Agency and RT broadcaster said during the protest that every person, who speaks against the policy taken by the current Ukrainian government, was in danger.

"Everyone in Ukraine, who is expressing the position different from that of the Kiev authorities, is at risk, and this risk is growing bigger as the elections in Ukraine approach," Simonyan said.

At the same time, Rossiya Segodnya Director General Dmitry Kiselev said that the arrest resembled the inquisition and stressed that the journalist should be freed, noting that any means, including his possible exchange for Ukrainian citizens jailed in Russia, would do.

"We have gathered here to express our protest against the inquisition, in fact. Because it very much resembles the inquisition — a person faces an absolutely absurd accusation of something he has not done, something he could not even commit, and then they simply destroy him…" Kiselev said.

"As for the detention of journalists, I agree with you. This is unprecedented. A person is charged with high treason for what he did publicly performing his professional duties. I haven't seen it for a long time, can't remember such things happening for a long time. We touched upon this issue, as well as other problems that we face in Ukraine, but I would not like to go into details," Putin said.

"As for the journalist [Vyshinsky], I will certainly discuss my current trip with the Ukrainian president, I will mention this case. As I said, Russian journalists who are here are arrested and can't do their work, which also causes our concern," Merkel noted after talks with Russian President Vladimir Putin.