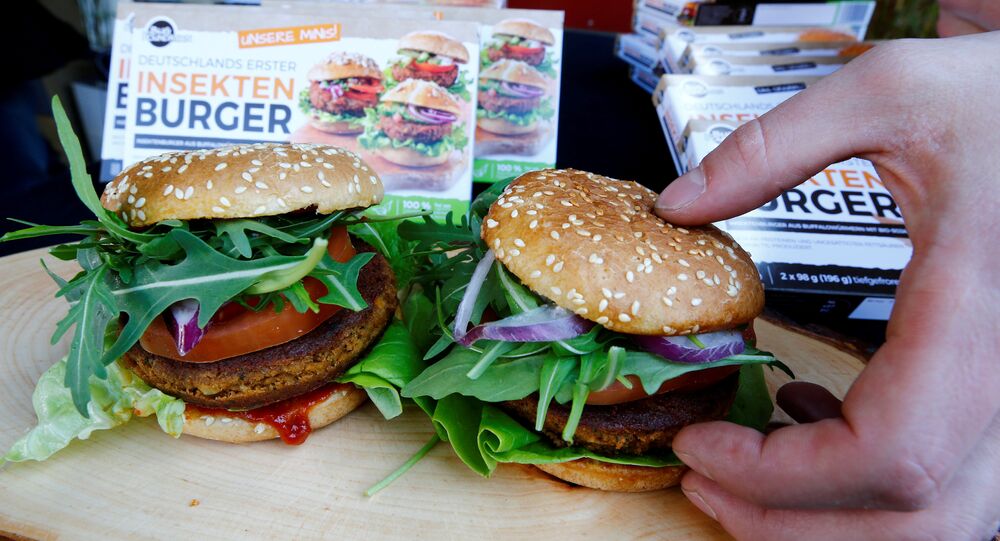 A German start-up has produced a new kind of protein-packed burger patty, providing a new experience to local foodies. Insect-burgers, made of larvae, are in stock in western Germany. People in other cities will soon get the dubious opportunity to indulge in this and other culinary creations thanks to new EU food regulations.

The first opportunity to try the German insect-burgers, made of the larvae of buffalo bugs, was offered shoppers in the western German City of Aachen. A local supermarket added the new specialty to their range recently.

It looks like a regular sandwich, with lettuce, onions, tomatoes and a patty somewhat like Falafel cake. But a game-changing ingredient has been added. What makes some curious and others disgusted is the powdered larvae of buffalo bugs, mixed with regular vegetables in the cake.

One of the founders of the startup Bug Foundation, Baris Özel, who came up with an idea travelling across Asia, describes it as nutty and similar to sunflower seeds.

He can’t praise the product enough, having told the Berliner Morgenpost Newspaper: "They look like normal burgers and smell delicious when you fry them. The next step isn’t that far: when you say 'Oh, I'll try it.' "

Their web-site heralds the bug-burgers as no less than a revolution on a plate and the food of the future. According to the start-uppers, they contain highly valuable proteins and are dense in important micronutrients. It’s also said to be eco-friendly, as insect rearing requires 10 times less feed than the equivalent amount of beef, and they emit less greenhouse gases.

Some embraced the opportunity, like one Aachen shopper, Manfred Roedder, who called insect a good alternative to meat.
“I had reservations at first but I got a second serving because it tasted so good,” he said, as cited by Reuters.

However, not everybody was so open to the experiment, according to supermarket manager Michael Reinartz.

“We have people who are totally thrilled to find out about the whole thing and have been looking forward to it for days. And we have people who say: You’re not seriously doing that?!” he told Reuters.

YES. Massive respect for the companies selling bug flour and burgers over the "yuck, eat this whole insect" snack lot. I had a mealworm falafel off someone who said the UK laws were tricky with regard to setting up big farms though

I like how the name is literally "Insect Burger". No sugarcoating here, have a burger made from crushed worms https://t.co/avVBLWgFe6

​However, not everybody was so eager about the idea.

​The bug-burgers are produced in the Netherlands, and have been selling well there and in neighboring Belgium. But the food innovators have a greater expansion in mind. According to their web-site, insect-burgers will soon be available in more than 100 locations in Europe, mostly in Germany and Austria.

For the chance to expand their food experiences and adopt new eating habits, the Europeans have the EU's  “Novel Food” Regulation to thank, which came in force on January 1, 2018. The new rules, which encourage new technology and production processes, as well as consuming food from outside the Union, now allows insects as food. Incidentally, In Switzerland, bug-burgers have been on the supermarket shelves since May 2017.

How to Feed Ten Billion: Lab-Made 'Clean Meat' Burgers are Future of Food