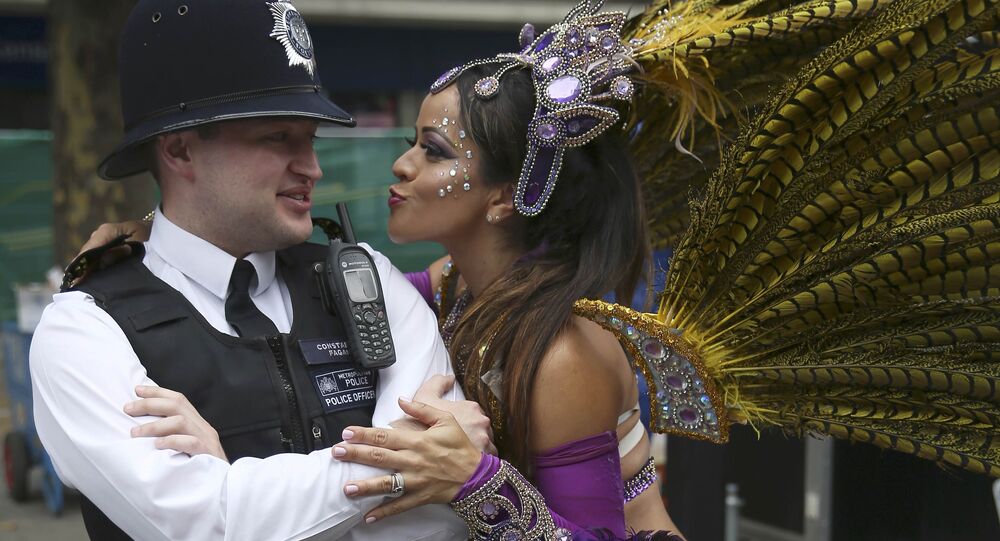 'It's Racial Policing': London Met Under Fire Due to Raid Ahead of Carnival

Turmoil erupted on social media on Tuesday, August 22, after users, including grime artist Stormzy, hit out at what they are calling racism after the Metropolitan Police in London carried out drug raids across the city ahead of the world-famous Notting Hill Carnival.

British musician Stormzy said the incident was unacceptable and asked how many homes were raided for drugs before other events in response to tweets by the Metropolitan Police.

​The Met tweeted on Tuesday, August 22, that in the run-up to the Notting Hill Carnival, they had seized "a kilo of uncut heroin" in Catford, London.

In the run up to #NottingHillCarnival, officers have this morning seized what is believed to be a kilo of uncut heroin in #Catford pic.twitter.com/pUCya5lrvj

The tweet caused outrage on social media as people questioned what the Notting Hill Carnival, which takes place in west London, had to do with a drugs raid in south east London.

It led to many social media users calling the police institutionally racist as they were linking this event with a drugs raid 12 miles away.

Sputnik spoke to Carson Arthur, policy and communications coordinator for Stop Watch — a coalition which works to promote effective, accountable and fair policing — about the raids, the carnival and racial profiling. Mr. Arthur said the tweet "the Metropolitan Police sent out about finding heroin in Catford reveals a particular racial way of thinking, which is aligning black people and criminality and forming that as a basis for who gets to go to carnival and who doesn't."

"I would say that it's very revealing that the Metropolitan Police would publicly promote themselves raiding houses and making arrests a week before the carnival that celebrates black British communities. That in itself is very revealing as to whom they could be targeting," Mr. Arthur said.

The Notting Hill Carnival, is attended by all races, however the majority of people who go are black.

The debate became public after grime artist Stromzy took to Twitter, stating that that this was a racially motivated tweet by the Met, who had failed to conduct a similar raid ahead of other mass music events, not just in London, but other areas of the country as well.

"As it's a carnival for black British people, I don't think it's unreasonable to make the assumption that they are targeting black people — that is a form of racial policing, deciding who gets to go to something and who doesn't, and on very weak grounds," Mr. Arthur told Sputnik.

Other social media users quickly joined Stormzy in pointing out that drugs had been found ahead of the Chelsea Flower Show, however the police had not linked the garden show, which is held for five days in the month May by the Royal Horticultural Society in the grounds of the Royal Hospital Chelsea in London, with drug raids.

​Stop and search, a problematic issue already, has now led to further controversy with this latest development from the Met. The UK police has a bad reputation with how it handles practices such as "stop and search," including raids on homes.

The power to stop and search someone dates back to 1824, and was known as the sus law, which was the informal name for a stop and search that permitted a police officer to stop, search and potentially arrest people on suspicion of them being in breach of section 4 of the Vagrancy Act 1824.

However, this law which led to the Brixton riots in 1981, as many young black men and women felt that it was racially targeting them specifically. Carson Arthur believes that this latest raid by the Met police ahead of the carnival is racially targeting black people.

"Sus law was basically racial profiling by the UK police […] it is controversial because sadly — while there have been some slight changes in terms of guidance and safeguards — the practice of stop and search continues to impact black and ethnic groups and we can see that in the rates [statistics]," Mr. Arthur said.

According to figures from Stop Watch, "black people were stopped and searched at almost four times the rate of white people across London in 2015/16."

3/ Essentially, an innocent black person is much more likely to be stopped and searched than an innocent white person

​As the police promote the fact they are raiding homes and stopping people, Mr. Arthur, just as Stormzy and many others, believes there is a definite link between house raids and the timing of the carnival — and this is much larger in volume when compared to any other music event that takes place in the country during the year.

"Its revealing of how the police still perceive and regard black British communities. If they come together to celebrate something that would require a big push or crackdown, as though it was a convention for criminals," Mr. Arthur told Sputnik.

As police raids and stop and search increases, Stop Watch advise that citizens who find themselves in this situation, question the officer on who they are, what station they belong to, and what the officer's reasonable suspicion is for stopping them.

Handling stop and search isn't easy but this @YStopUK film shows you 6 steps to help manage the encounter https://t.co/NuAzMX6uFw …

​​"Also get a receipt, so that you have a record. If you feel that the search was wrong you can complain. Another thing is that you don't have to provide your name and details to be given a receipt," Mr. Arthur said.