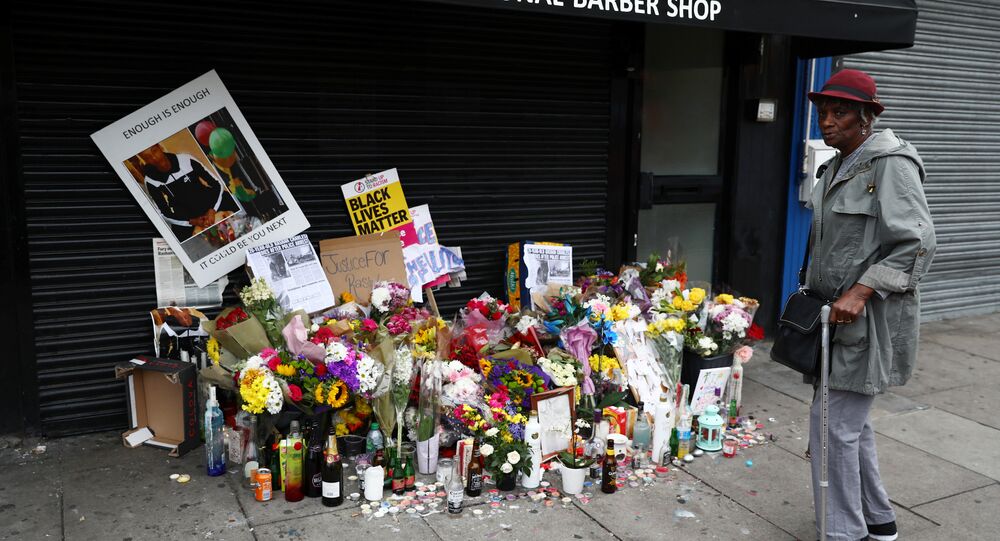 Social media posts released by the family of Rashan Charles have given an insight into the life of a young father who died after he was restrained by the Metropolitan police in London. Community members have come out in support of Charles, and a campaigner told Sputnik that the police are still institutionally racist and "cannot be trusted."

This all comes amid protests in east London, which erupted on June 30, after what was meant to be a peaceful demonstration descended into violence over the death of Rashan Charles.

Officers have been subjected to abuse & violence. Whatever the frustrations, this is patently NOT what the family of Rashan Charles wanted. pic.twitter.com/X0WdLHHt0m

​Rashan Charles is the latest black man to die in police custody, and campaigners are calling for justice with many asking for those responsible to be held accountable.

However, this latest tragedy has also led people to ask whether the police force is institutionally racist.

A History of Discrimination

Discrimination against ethnic minorities, in particular young black men, by police in the UK dates back to the early 1980s.

After the Brixton riots, the black community began to mistrust the police.

A 2013 IPCC report outlined that many officers involved in the riots had been "racially prejudiced."

On April 22, 1993, eighteen-year-old Stephen Lawrence was stabbed to death in an unprovoked attack by a gang of white youths in south-east London.

The police failed to find the men who had committed the crime. Instead they investigated Stephen Lawrence's family.

​This "ineffectual response" to the murder of Stephen Lawrence, signaled a further lack of confidence in policing, and led to the The Macpherson Report in 1999, which found the police to be "institutionally racist."

Shortly after Stephen Lawrence's death in 1993, the Metropolitan police commissioner at the time, Sir Paul Condon, claimed that most muggings were being committed by "young black people."

"It is a fact that very many of the perpetrators of mugging are very young black people," Sir Paul Condon said.

In 2009, The Macpherson Report — Ten Years On followed, and the Home Affairs Select Committee noted that the police service had made progress in tackling racial prejudice.

The killing of Mark Duggan by police in August 2011 led to riots across the country.

Since Mark Duggan's death more men are being killed in custody than ever before. There has only been one prosecution for a death in custody, and that was in 1969.

David Oluwale was the first black man to die while in police custody.

Two police officers in Leeds were found guilty and subsequently sent to prison.

Ava Vidal, a writer and comedian, who is currently working on a project empowering women through comedy, believes that nothing has changed since the killing of Mark Duggan and that the force is still institutionally racist.

"They [the police force] are, they've agreed themselves. I don't understand people who argue against this when they have said so themselves," she said.

"…It doesn't matter what your intentions are when you go into that [police] job, you will not be allowed to do it properly. It is so rotten all the way through. The pressure will have to come from outside, and they are going to have to be tested, held to account, write more reports, wear body cams and keep them on, as they have proved they cannot be trusted," Ms. Vidal told Sputnik.

Concerns have also grown in relation to the way the police restrain suspects.

In June 2017, a 25-year-old black man known as Edir Frederico Da Costa died after being detained by the police.

On July 16, a 16-year-old boy also died during a police pursuit in London.

On July 19, another black male, Darren Cumberbatch, died while in police custody.

The video footage of Rashan Charles shows the police restraining and pinning him down after he swallows a package.

"They [the police] probably know how to restrain […] If someone has got drugs in their system and they go ahead and swallow it, leave it, just get them to the hospital.

"One of the worst things as an officer you can have, is someone spit in your face, and if you're trying to go after someone who has got drugs, if they ingest drugs or you suspect they've ingested drugs, just leave them and take them to a hospital. What are you going to do, put your hand in their mouth for them to bite you?" Ms. Vidal said.

As with the many deaths before Rashan Charles, campaigners continue to call for change.

"The police who restrain people incorrectly need to go to jail; they need to be prosecuted […] They should be removed off the streets immediately, without pay and the full extent of the law should be used for them to be prosecuted.

"As far as I'm concerned, if you use something on duty like a chokehold or something you know is not legal as a policeman, you are no longer acting as a policeman, so you should be charged as a civilian," Ms. Vidal concluded.