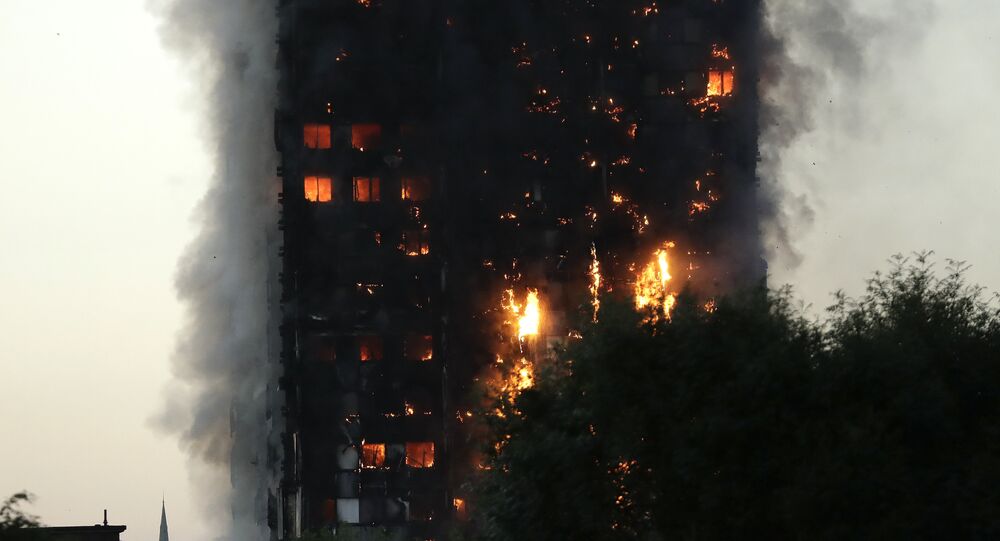 One of the victims of the Grenfell Tower fire was on the phone to a 999 operator for 55 minutes, say detectives investigating the blaze. The Metropolitan Police said on Monday (July 10) they expected the final death toll from last month's fire to be around 80.

Detective Chief Inspector Matt Bonner said he had listened to one call, with a resident who died, which had lasted 55 minutes.

In June, clinical psychologist Linda Blair told Sputnik many of those 999 operators were likely to have suffered post-traumatic stress disorder and may well need counseling in the future.

Commander Cundy said the criminal investigation would look at whether a number of offenses — including manslaughter — had been committed.

In a briefing to crime reporters at New Scotland Yard — which, since November, is located on the banks of the Thames — several other key facts emerged.

Six people fell or jumped to their deaths from the building during the blaze.

Grenfell residents: all will be rehoused with thought, compassion and consideration dependent on their individual families’ needs

​The remainder of those who died were inside flats or in corridors, between the ninth floor and the top floor and many had clearly tried to flee up the building as the fire spread. But police confirmed no bodies were found on the roof.

Detectives have seized documents from 60 companies or organizations involved in the construction, management or refurbishment of Grenfell Tower. Data from one company alone amounted to four terabytes, which is the equivalent of two million boxes of A4 paper.

Detective Chief Inspector Bonner said they were also trawling through 20 terabytes of CCTV footage, which was the equivalent of 5,000 feature films.

He also said they had interviewed 140 witnesses, but nobody had been interviewed under caution, as a suspect.

Police say about 350 people were living in or staying in Grenfell Tower at the time of the fire. 14 were out that night. 255 survived.

​Asked how long the criminal investigation might take, DCI Bonner said: "It is impossible to say. How long it takes depends on where the evidence takes us."

Commander Cundy said the scale of the investigation was "huge" and he said it would be looking into the "stay put" advice given to residents.

London Fire Brigade confirmed to Sputnik in June that they maintained the "stay put" advice to residents in tower blocks.

All 650 firefighters who were on duty on the night will have to be interviewed, as well as 300 police officers, paramedics, 255 survivors and a number of neighbor who had crucial information, including those who first spotted the fire on the outside of the tower.

Detective Chief Inspector Andy Chalmers said cutting-edge technology from around the world had been involved in the operation to identify the remains of the dead.

He said they had also worked with the New York medical examiner's office, which had been involved in trying to identify victims of 9/11 in 2001.

Detective Chief Inspector Chalmers said 32 sets of remains had been definitively identified by the coroner, but they were now trying to identify people who had been burned beyond recognition.

"It's getting progressively more challenging," he said.

Commander Cundy said 350 people should have been in the building on the night of the fire, but 14 residents were not there on the night.

© REUTERS / Marko Djurica
Members of the emergency services attend a minute's silence for the victims of the Grenfell Tower fire near the site of the blaze in North Kensington, London, Britain, June 19, 2017.

He said he knew at least 255 people had escaped and survived, which left around 80 missing and presumed dead.

"But we have also heard that there are a number of other people who escaped the fire, but for a number of different reasons have not come forward to the authorities," said Commander Cundy.

He urged them to come forward and said the Home Office had agreed not to carry out immigration checks on them and the Director of Public Prosecutions had confirmed no-one would be prosecuted for sub-letting apartments within Grenfell Tower.

Cmdr Cundy was asked about the widespread belief in the North Kensington community that the death toll was considerably higher than 80 and that more people were in the tower at the time of the fire.

This is the moment Grenfell residents confront Sir Martin Moore-Bick, the head of the tower fire inquiry. pic.twitter.com/wfe3OqeGAm

​"We know there has been commentary about hundreds and hundreds of people being in the flats. One figure suggested 600. But a lot of those flats were single occupant flats and we really don't think the final number of those inside will be much higher than 350," he said.

"We are not hearing anything about large groups of people who have failed to escape the fire," he added.

Detective Chief Inspector Chalmers also gave an update about the building itself.

"There is no danger of the tower falling down. In one corner there has been some buckling and bowing of load-bearing walls, but there has been structural shoring up to make it safe," he said.

"The tower moved naturally as it cooled and in terms of the weather. There are a number of sophisticated measuring devices installed and we have occasionally had to conduct precautionary evacuations but there is no reason to belief it will come down," he added.