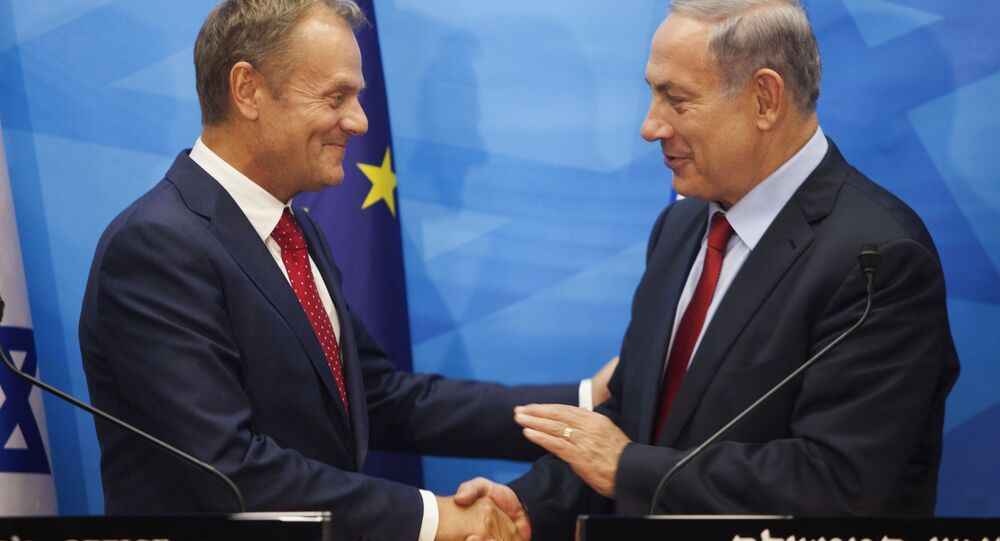 An Israel-Europe gas pipeline deal elevates Israel to the status of a major Mediterranean energy exporter. However, critics suggest the move is about more than mere economics, and serves a number of greater geopolitical objectives - namely, immunizing Israel from criticism and sanctions, and damaging relations between Europe and Russia further.

Ministers from Israel, Greece, Italy and Cyprus, as well as the European Union Commissioner for Climate Action and Energy, signed a joint declaration in April, codifying a commitment to constructing a gas pipeline that will bring newly discovered natural gas in Israel to Europe.

The pipeline, described by Israeli Energy Minister Yuval Steinitz as "the longest and deepest subsea gas pipeline in the world," is expected to be in operation by 2025.

Designated as a "project of common interest" by the EU, the pipeline has been marketed by both sides as an ideal alternative to the bloc's continuing dependence on Russian energy — an overt indication the deal is being pursued for political rather than economic purposes. After all, high infrastructure costs coupled with low gas prices will almost by definition make it considerably dearer than the existing energy relationship between Russia and Europe.

With Leviathan due online in 2019 & smaller fields to follow, Israel faces a surplus of gas with no market for it. https://t.co/maU4JQs7kX pic.twitter.com/ypTi8CJafa

The Atlantic Council Global Energy Center has even suggested the proposed project may never come to fruition, once the commercial difficulties inherent in making it operational become reality. Current European energy demands in no way commercially justify an additional gas supply source for the continent.

If constructed, the pipeline will pump gas from Israel's giant Leviathan field, the discovery of which in 2010 transformed Israel from a net importer of energy into a potential regional energy player — the field is estimated to hold around 20 trillion cubic feet of gas. Despite Lebanon arguing Leviathan sits partially in Lebanese waters, Israel has pushed ahead with international deals, selling 39.7 percent to US-based Noble Energy.

In March, Jordan became the first country to sign up for Leviathan gas. The move ignited waves of protest, on the basis the agreement would increase Jordan's dependency on Israel, and potentially finance Israel's occupation of Palestine.

Such concerns go beyond reflexive prejudice. Israeli Prime Minister Benjamin Netanyahu has noted the potential of gas deals to insulate the country from international condemnation and action.

"Ensuring the supply of gas is essential not only to the country's functioning, but also to its existence. I regard the gas supply as a foundation of national security. A country that exports things crucial for other countries has far more power. The ability to export gas makes us more immune to international pressure. We don't want to be vulnerable to boycotts," Netanyahu said.

Annexing Energy — Exploiting and Preventing the Development of Oil and Gas in the OPT: https://t.co/vHmIi0JncS pic.twitter.com/P1rY1lyW8R

Moreover, in a report, Annexing Energy, Al-Haq noted it was "impossible" to geographically isolate gas fields in mainland Israel and characterize them as separate from the country's ongoing conflict with Palestine.

"In 2011, Noble Energy, the lead operator of the Leviathan field, unilaterally extracted gas from a joint Palestinian gas field without Palestinian permission as required under customary international law and the Oslo Accords. Israel has also employed a brutal and unlawful naval operation to protect Noble Energy's gas platforms beside the Gaza Strip, routinely attacking, killing and injuring civilian Palestinian fishermen who fish in the vicinity of Israel's illegally imposed six-nautical-mile closure of Palestine's territorial waters," the report said.

In a perverse twist, the deal also comes at a time when Gaza continues to reel from a major energy crisis, which has seen powercuts lasting as long as 18 hours, and results from Israel blocking the region from developing its own resources.

The Al-Haq report concluded that if Palestinians were permitted to do so, their own energy needs would be satiated, and they would be economically self-sufficient, freed from their current aid dependency.