Ukraine's president has approved the National Security and Defense Council's proposal to impose sanctions against the subsidiaries of 5 Russian banks over a one year period. Speaking to Radio Sputnik, economist Nikita Maslennikov warned that the sanctions will only end up harming Ukraine's own economy, and could cause an irreversible domino effect.

On Thursday, President Petro Poroshenko approved sanctions against the subsidiaries of 5 Russian banks, including Sberbank, VTB, BM-Bank (owned by VTB Group), Prominvestbank (a Vnesheconombank subsidiary) and VS Bank (a subsidiary of Sberbank).

© AP Photo / Sergei Chuzavkov
Poroshenko Approves One-Year Sanctions Against 5 Russian State Bank Subsidiaries
The sanctions come after days of protests by nationalist radicals in front of the branches of Russian-owned banks, including at the entrance to Sberbank Ukraine's central Kiev office. 400 employees were trapped inside the bank on Monday, with protesters continuing to hinder access to the bank the following day. Sberbank and other Russian banks have also been subjected to vandalism by the radicals.

Moscow has conveyed its concern with the situation unfolding around Russian banks' subsidiaries in Ukraine, saying that the activity contravenes international law. Russia is prepared to take all legitimate measures to protect the banks if necessary, presidential spokesman Dmitri Peskov said Thursday.

© Sputnik / STR
Radicals outside Russia's Sberbank central Kiev office. The radicals walled up some windows and the entrance of the office with concrete blocks.

Sberbank has indicated it considers Kiev's sanctions discriminatory and politically motivated. At the same time, the bank stressed that it has all the necessary resources to continue its work with Ukrainian clients.

Russian officials and economists have also warned that Kiev's actions are making Ukraine's already investment-starved business climate even worse. Experts have pointed out that Russian banks account for about 10% of Ukraine's total market in banking services, with sanctions threatening to affect the entire sector, with knock-on effects for the economy as a whole. Four of Ukraine's 15 largest commercial banks are subsidiaries of Russian banks. 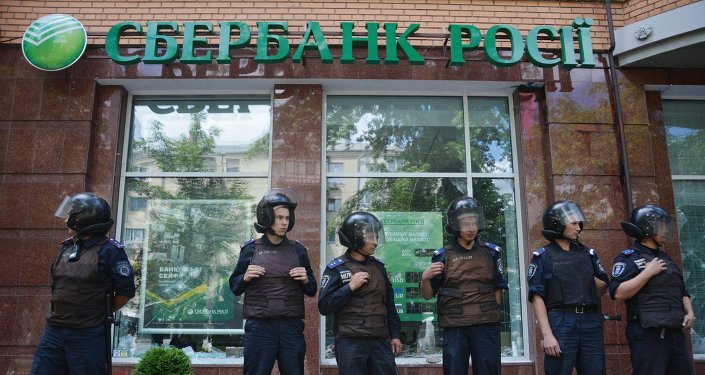 Speaking to Radio Sputnik about the implications of the sanctions, Nikita Maslennikov, senior fellow at the Institute of Contemporary Development, said that Kiev's shortsighted policy will only end up harming Ukraine itself in the end.

The economist emphasized that "today, the five [sanctioned] banks are among the healthiest and most efficient part of the financial and banking system of Ukraine." Effectively, he noted, "Ukraine is cutting the 'financial tree branch' on which it sits."

At the same time, the intent of the sanctions are "very clear," according to Maslennikov. Their purpose is "to cut financial communications between subsidiaries and their parent companies. It's as if they want to say 'Please, invest as much money as you like from Russia into Ukraine, but taking it back? That's a no-no.'"

© AP Photo / Sergei Chuzavkov
Radicals in front of a Sberbank branch in Kiev, putting up posters which read "Attention! This is a bank of an aggressor country. It will be closed. Urgently withdraw your money!", during a protest. Graffiti reads "Death to Russian banks." March 10, 2017

Maslennikov indicated that some of his colleagues believe that the groundwork is being laid for the liquidation and nationalization of these banks' assets. Other experts have already pointed out that Ukrainian oligarchs with connections to the government may be given first dibs on these assets. "But what will the Ukrainian side achieve by doing so?" Maslennikov asked. "Trying to understand the intricacies of Ukrainian politicians' motivations is a rather dreary task," the expert noted.

According to the economist, one possible consequence of the sanctions may be problems for ordinary Ukrainians who have savings in the Russian banks' subsidiaries –and depositors in general. The figures speak for themselves. Sberbank alone has about 11.4 billion hryvnia (equivalent to about $425 million) in depositors' savings in its coffers, and that's not even counting commercial entities' funds, which amount to 7.4 billion hryvnia ($276 million).

© Sputnik / Iliya Pitalev
If Kiev Nationalizes Russian Banks, Entire Banking System & Economy Will Collapse
For now, Maslennikov noted, Russian banks in Ukraine haven't been rushed by depositors looking to get their money out. Nevertheless, he stressed that at some banks, including Sberbank, the panicked look on the faces of clients is already apparent.

"In a situation where Ukraine's credit banking system is already fairly fragile, one can only sympathize with those who fall under these millstones. Because if a run on Sberbank starts, then a domino effect – the flight of depositors from other banks, will be guaranteed. Therefore, Kiev would have done better to think long and hard and then think some more before imposing sanctions," Maslennikov concluded.