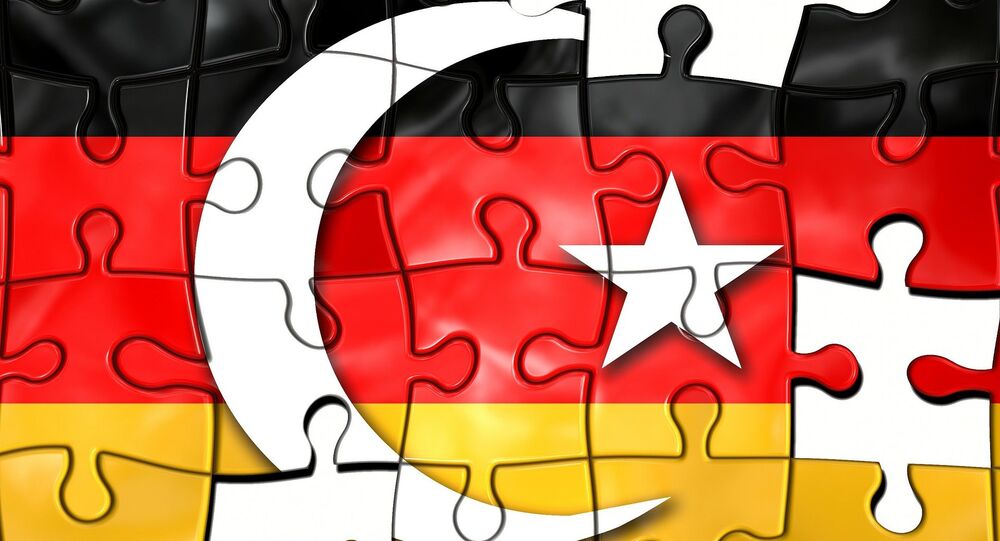 With references to Germany's Nazi past, Turkish President Erdogan is trying to start a "war of words" with Berlin, which until now has reacted coolly to Ankara's provocations, German lawyer and politician Memet Kilic told Sputnik Turkiye.

© REUTERS / Rodi Said
Thirst Wars: Turkey Applies Political Pressure by Cutting Off Water to Syria
Last month, a journalist for the German Die Welt newspaper was arrested in Turkey on charges of suspected membership of a terrorist organization and terrorist propaganda.

Deniz Yucel, a 43-year-old dual citizen of Turkey and Germany, remains in prison in Istanbul despite the efforts of the German Foreign Ministry to advocate for his release.

"German-Turkey relations are facing one of their greatest challenges of the modern era," Foreign Minister Sigmar Gabriel told reporters in Berlin.

Yucel was arrested as he was reporting on emails leaked to the public by Marxist-Leninist hacker collective RedHack. The hackers had uncovered emails from Berat Albayrak, the Energy Minister, and son-in-law of President Recep Tayyip Erdogan.

The leaked emails allegedly detail Albayrak's involvement in influencing public opinion through fake Twitter accounts and his control of Turkish media companies, as well as "involvement in organizations such as Powertrans, the company implicated in [Daesh] oil imports."

The already tense relationship between Berlin and Ankara was exacerbated further after German authorities canceled political rallies that Turkey's Justice and Development (AKP) party wanted to hold ahead of a referendum in Turkey that proposes to change the country's constitution and increase the powers of President Erdogan.

Several Turkish government ministers had planned to address potential voters in Germany, where there are approximately 1.4 million people eligible to vote in the referendum.

Erdogan lambasted the decision and accused the German authorities of behaving like Nazis.

"Germany, you are miles away from [being a] democracy. Your actions are no different than those of Nazis in the past," he told a rally in Istanbul on Sunday.

© AP Photo / Markus Schreiber
In Bid to Save Refugee Deal, Chancellor Merkel Lets Ankara Off the Hook
The Turkish President's comments were criticized by the German government and media.

"Germany has no superior in the spheres of rule of law, tolerance and liberality," the German Chancellery's Chief of Staff Peter Altmaier told the ARD broadcaster, adding that the Erdogan's statement was "absolutely unacceptable."

Memet Kilic, a German lawyer and Greens politician of Turkish origin, told Sputnik Turkiye that Erdogan's latest insult may prove too much for Germany, which has showed restraint in the past.

"Since 2011, Germany has shown restraint on a number of issues. Erdogan accused Germany of supporting the Kurdistan Workers' Party. Germany reacted calmly and diplomatically. But parallels with Nazi Germany are an open challenge and can be interpreted as the beginning of a 'war of words' by Turkey."

Kilic said that the activities of the Turkish government, which failed to give prior information to the German authorities about the true nature of the rallies, are to blame for the current difficulties.

© AFP 2021 / JOHN MACDOUGALL
'We Want Peaceful Foreign Policy': German Leftists Call for Détente With Russia
"There aren't any underlying political reasons for the German authorities' actions in this case. The hall was initially rented for a cultural event. The municipal authorities knew that it had been rented by the Justice and Development (AKP) party. However, the day before the event, it suddenly turns out that the Minister of Justice is going to deliver a speech. Even the Federal Justice Minister learns on the last day that the Justice Minister of Turkey is coming here to make a speech. In this situation, the authorities rightly stated that they are not able to provide the necessary level of security during the minister's speech and decided to cancel the event. So, in this case the Turks suffered because of their own slyness," Kilic explained.

"After all, the German authorities didn't say that they had stopped the speech for political reasons. Moreover, Minister of the Economy Zeybekci still held the scheduled meeting, but at another venue. In fact, I believe that the situation was aggravated because the representatives of the Turkish ruling party, advocating for constitutional changes in the country, tried to show themselves as fighters for freedom of thought and democracy. They have laid to waste the authority of Turkey outside the country just to win the possible votes of the electorate in Germany."

Kilic explained that while representatives of foreign nations are allowed to carry out political campaigning in Germany, there is an administrative procedure that must be adhered to.

"In 2016, the court ruled that high-ranking officials and members of foreign governments can carry out election campaigns in Germany with the government's permission. This was approved by the Constitutional Court the same year. This provision applies to all politicians. That is, whether or not the President of Turkey or members of the government will conduct an election campaign here depends on whether Germany gives permission. Up to now, Germany has not resorted to preventing this at the government level. It continues to operate diplomatically, but Turkish representatives do not follow the country's rules. They come at random and don't warn about their arrival in advance. Such an approach doesn't work in Germany."