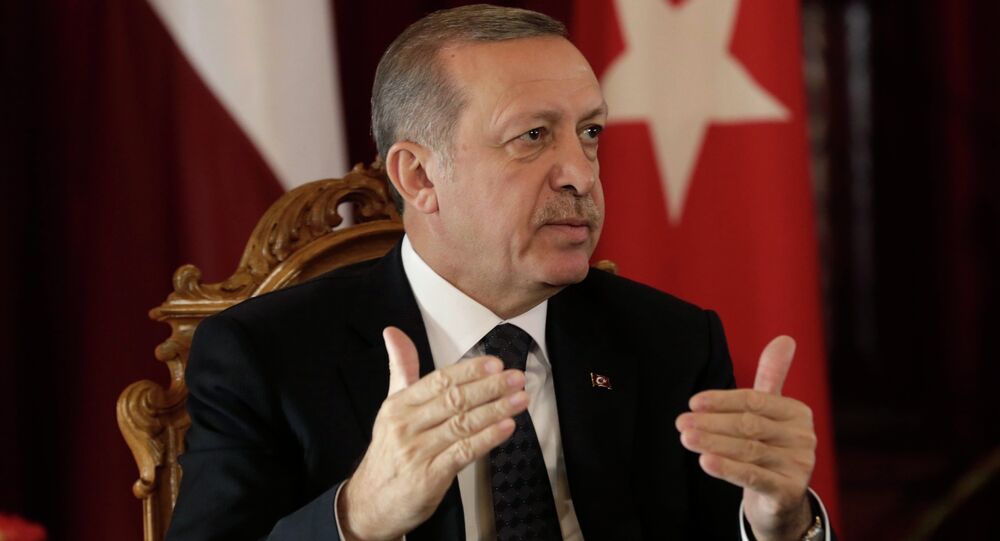 The Turkish president has seized the opportunity presented by the migrant crisis to behave like a sultan who issues threats to Europe, German magazine Der Spiegel reported.

© AFP 2021 / ACHILLEAS ZAVALLIS
Syrian Kurds to Continue Working With Russia to Halt Illegal Oil to Turkey
Turkish president Recep Tayyip Erdogan's threats to open the borders with Europe to millions of refugees and migrants unless Brussels accedes to his demands is proof that he is exploiting the crisis and blackmailing Europe, German magazine Der Spiegel reported.

"We can open the doors to Greece and Bulgaria anytime and we can put the refugees on buses," Erdogan said when Juncker told him Turkey would get 3 billion euros from the EU over two years rather than 6 billion as the Turkish government was demanding, according to the minutes of the meeting.

"So how will you deal with the refugees if you don't get a deal? Kill the refugees?" the Turkish president asked Tusk and Juncker.

"Erdogan says that the EU will be confronted with more than a dead boy on the shores of Turkey. There will be 10,000 or 15,000. How will you deal with that?" the minutes record the Turkish president as saying.

​Among the tense exchanges were when Erdogan told Juncker that "Luxembourg is just like a town in Turkey," and responded to Juncker's observation that "We treated you like a prince in Brussels," by saying,

"Like a prince? Of course, I'm not representing some third world country."

The minutes also reveal that the EU acceded to Erdogan's request to delay a progress report on Turkey's accession to the EU in order to help Erdogan's AKP party win elections.

These unconfirmed minutes of Juncker/Erdogan talks are juicy. At least they are plausible https://t.co/ZmuKkVs5P9 pic.twitter.com/c1CVHFPYcj

​Germany's Der Spiegel magazine reported on Tuesday that the transcript shows the extent to which the EU is being blackmailed by Erdogan.

"The document shows once again that the Turks have not been coming to Brussels as petitioners for a long time," the newspaper wrote.

"Erdogan is the gatekeeper for more than two million refugees who are currently living in Turkey, so he can make demands that until recently were poison to the Europeans."

© AP Photo / Bunyamin Aygun
Wrong Answer: Turkish Former Envoy Explains Why NATO Can't Police Migration
"The minutes are not the first indication of how robust Erdogan is behaving in the refugee crisis. His visit in early October 2015 is still well remembered by top figures in the EU," when he met with Juncker, Tusk and European Parliament President Martin Schulz.

"Erdogan, the guest, left no doubt about who was in charge. After some chat he invited the others to the table with a gesture 'like a sultan,' recalled one person who was there."

The magazine also quoted leading members of Angela Merkel's cabinet, who are "under no illusions when it comes to the intentions of the Turkish president," and said it was conceivable that the three billion euros already promised to Erdogan may soon have to be increased.

"Everyone knows that he can blackmail us," a cabinet source told Spiegel.