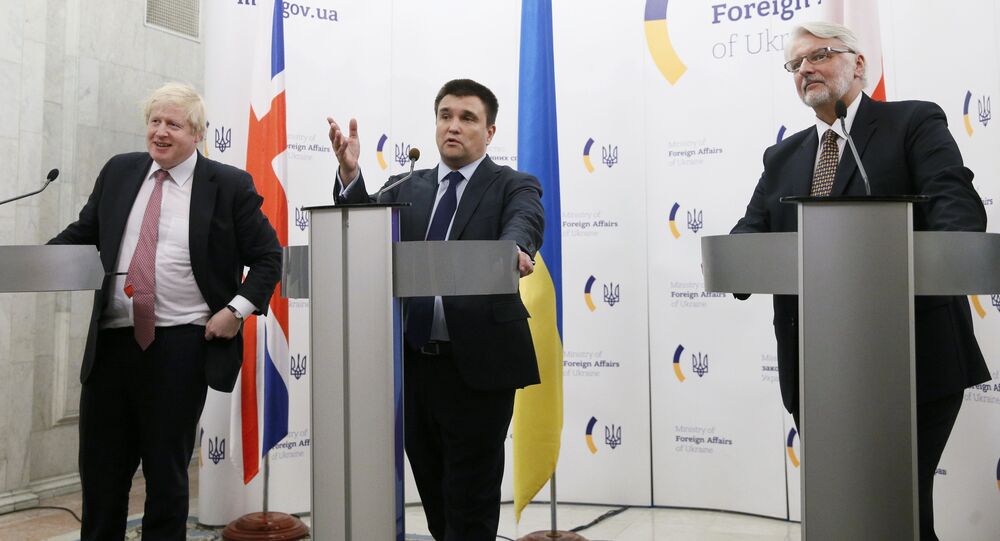 Bad Neighbors? UK, Polish Foreign Secs on 'Everything Is Rosy' Visit to Ukraine

UK and Polish Foreign Secretaries Boris Johnson and Witold Waszczykowski have been dispatched to Kiev to reiterate both countries' "unwavering" support for Ukraine.

The two ministers are scheduled to hold a series of high-level meetings with President Poroshenko, Prime Minister Groysman, Deputy Prime Minister Klympush-Tsyntsadze and Foreign Minister Klimkin, among others.

In an official statement, Johnson said he was "delighted" to be visiting Ukraine, praising the "great work" that's being done on corruption in the country. He also said the UK remained committed to defending the sovereignty of Ukraine, and appealed Russia to return the "Ukrainian" Crimea. For his part, Waszczykowski said Poland had always supported Ukraine's "pro-European path," calling the country a "strategic partner."

Ordering Russia to overturn a legal referendum and subsequent request by the Crimean parliament to reincorporate the region into the Russian Federation after years of overwhelming public support for such a move may seem an odd demand even for the gaffe-prone Johnson to make, but the entire trip has a palpable air of peculiarity to it.

For one, talk of Ukraine's "progress" on fighting corruption is almost entirely detached from observable reality. In Transparency International's 2016 Corruption Perception Index, the country scored 29 points out a possible 100 — admittedly, a mild improvement on 2015's score (31), but still a rating that classes the country amongst the world's most corrupt. In international rankings, it stands at 131 out of the 176 countries considered by the study.

"The de facto immunity of corrupt officials prevents reform. Without the complete cleansing of the justice system and a transparent and fair judicial system we will not be able to break the impunity circle," he concluded.

Moreover, the spirit of European solidarity and accord both Foreign Ministers attempted to evoke is strongly lessened given the relations both their home countries currently "enjoy" with the EU — after all, the UK is leaving, and Poland is on the verge of getting itself kicked out, a prospect neither country's government appears to view with much negativity or trepidation.

Little more can be said about Brexit, at least for the time being, but Poland's ongoing battles with the EU are worthy of exploration. Poland has demonstrated it has little concern for European integration — its government places the country's own national interests ahead of wider European ones, and its leaders are concerned with what is beneficial for the nation, both from an economic and political point of view. The country has been at odds since the ruling Law & Order party made changes to the country's Constitutional Tribunal in 2015, blunting its powers in the process.

In response, Poland was given until October to "take appropriate action" to address "systemic threats" to the rule of law, or face the European Commission invoking Article 7, which strips a member state of its voting rights within all EU institutions. This was subsequently extended to the end of February 2017 — although as of March 1, the Polish government has persisted in complying with orders. The European Commission is exploring the imposition of sanctions on the country as a result.

@EU_Commission recommendation regarding the Rule of Law in Poland: Questions & Answers https://t.co/xVW2pfVBVN

EU President Donald Tusk, himself a Polish citizen, has repeatedly warned "the European model of democracy" is being undermined in Poland, which poses a "strategic risk" to the EU itself, although his repeated censures have provoked harsh responses from the Polish government. In January 2017, none other than Waszczykowski described the EU Council President Donald Tusk as "the icon of evil and stupidity."

A month later, Waszczykowski again laid into Tusk, condemning the fact the President has not visited his home country for talks with the government while seeking reelection. The "absurd" Tusk, Waszczykowski said, "is behaving grotesquely, ignoring his own government." If Tusk wished to receive Poland's blessing for another term, Waszczykowski said he must come to Poland for "a serious conversation" with authorities about his record as president.

Veteran on 40m talk w/Boris Johnson about E Ukraine war—"He knows nothing about whats going on (or pretends not to)" https://t.co/Nmob7h1knh pic.twitter.com/PBI6VOdPLG

Perhaps the answer to this apparently irreconcilable contradiction is Waszczykowski favors a "European path" for Ukraine, but not Poland. Alternatively, perhaps it was felt an EU Member State neighboring Ukraine may have been a better ambassador for the bloc than a Western European nation, such as the Netherlands. There, the country's parliament is currently in the process of ratifying a deeply unpopular treaty aims to establish closer links between the EU and Ukraine, despite the proposals being rejected overwhelmingly by voters in a March 2016 referendum, with 64 percent of voters saying "Nee."

© AFP 2021 / Bart Maat / ANP
Dutch member of the Socialist Party (SP) Harry van Bommel hands out flyers against a referendum on the association treaty with Ukraine, in The Hague, on April 5, 2016

The Dutch Freedom Party, a populist entity headed by the colorful Geert Wilders, has made significant political capital out of the government's determination to ratify the agreement in the face of widespread opposition, using the issue to advance the party's core anti-EU, anti-establishment messaging. There are some suggestions it could even hand Wilders a place in the Dutch government.

'The Fish Rots From the Head?' Not Only Brussels Responsible for EU Crisis