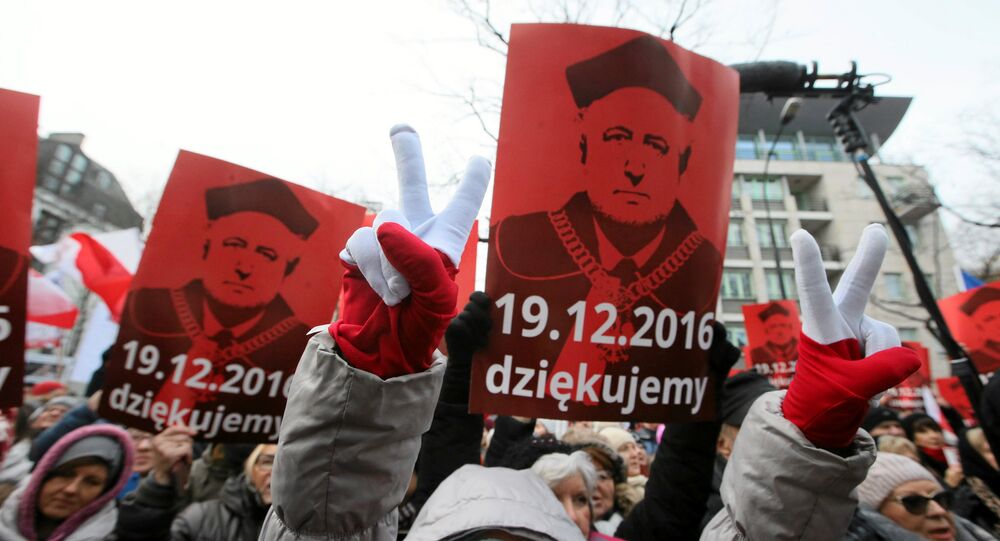 The former Polish Prime Minister and current President of the European Council Donald Tusk is facing a crisis both at home and abroad as the constitutional crisis and clampdown on the media in Poland escalates in what will inevitably become a showdown between Warsaw and Brussels.

The constitutional crisis comes to a head Monday (December 19), with the expiry of the term of office of the president of Poland's Constitutional Court, Andrzej Rzepliński who has accused the government of becoming an "autocracy."

His departure is seen as paving the way for the government to seize total control of its highest institutional check on executive powers.

Tusk this weekend (December 17) warned that the continuing standoff between the ruling Law and Justice (PiS) Party over its grip of the constitutional court and the media, calling for "respect and consideration of the people, constitutional principles and morals."

Tusk warned that "the European model of democracy" was being undermined and was "exposing us all to strategic risks." His comments on the Polish issue will carry weight, considering his position and the fact that the European Commission is threatening to remove Poland's voting rights within the EU.

Poland has been in crisis for more than a year since the right-wing PiS Party, led by Jarosław Kaczynski and Prime Minister Beata Szydlo, made controversial changes to the country's Constitutional Tribunal, which had the effect of blunting its powers.

© AFP 2020 / Janek Skarzynski
Thousands of people march in front of the presidential palace in Warsaw to protest against the government's moves that have paralyzed the nation’s highest legislative court, the Constitutional Tribunal on March 12, 2016.

Most recently, the Polish Government has said it plans to impose limits of the numbers of journalists allowed to cover the work of parliament, with a ban on photography and video.

@EU_Commission recommendation regarding the Rule of Law in Poland: Questions & Answers https://t.co/xVW2pfVBVN

The Commission gave the Warsaw government until the end of October to "take appropriate action to address this systemic threat to the rule of law as a matter of urgency" — which it has failed to do — or face the Commission invoking the 'Article 7 Procedure' under EU law, which strips a member state of its voting rights within all EU institutions.

Tusk's intervention is a further sign of the standoff between Poland and the EU worsening, with the deadline for Warsaw to address the concerns of the Commission having passed at the end of October. As President of the European Council, Tusk will be under more pressure over the Poland issue at the next EU mini-summit in February.