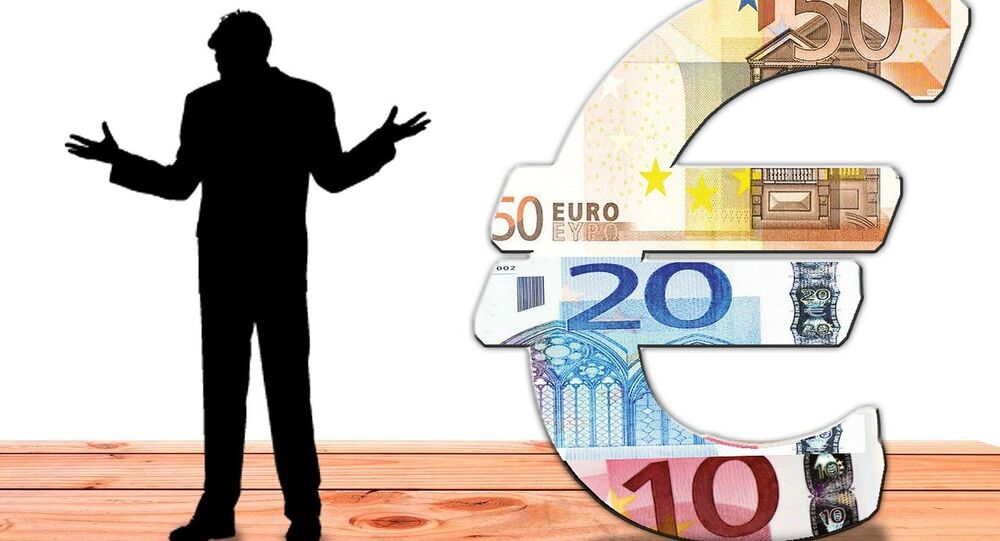 French Finance Minister Michel Sapin has called on Germany to invest more of its export surplus to help growth in the Eurozone; another solution to the disparity between Germany and the rest of the Eurozone would be to force Berlin out of the single currency, French economist Henri Sterdyniak told Sputnik.

"Germany could be more ambitious in this area," he said, adding that Europe needs to restore investment to the levels seen before the global financial crisis.

"If we all only pull in one direction, namely reducing budget deficits, the adjustments (in Europe) will be even harder."

Germany is by far the largest exporter of goods to EU and non-EU countries. In 2015, Germany accounted for 28.2 percent of the EU's exports of goods to non-member countries, and 22.6 percent of goods shipped to other EU member states.

US President Donald Trump has repeatedly criticized German trade policy and threatened to place tariffs on imports from Germany such as cars.

Last month he called the EU a "vehicle for Germany," and last week his adviser Peter Navarro accused Germany of exploiting the euro exchange rate for trade purposes.

Germany "continues to exploit other countries in the EU as well as the US with an 'implicit Deutsche Mark' that is grossly undervalued," Navarro told the Financial Times.

German Chancellor Angela Merkel rejected the accusation that Germany is exploiting the euro exchange rate for trade purposes, and said that Germany has no influence over the behavior of the European Central Bank, which sets the exchange rate.

"Germany is a country that has always called for the European Central Bank to pursue an independent policy, just as the Bundesbank did before the euro existed," Merkel said.

Despite his criticism of Germany's lack of investment, Sapin told Handelsblatt that he doesn't agree with attacks on Germany's strong position within the Eurozone.

"The ECB never tries to manipulate the exchange rate of the euro to achieve trade or competitive policy goals," Sapin said.

"Mr Sapin's position is not completely clear. Of course, the US is right: Germany is exploiting this situation in Europe. Germany has a very low exchange rate, particularly against the dollar, which explains its record surplus to a large extent. At 8.6 percent of GDP it is the largest in the world and exceeds the rather high average 6 percent average established by the European authorities," Sterdyniak said.

"In this regard, there are two solutions. The first is rejected by Sapen: Germany exits the Eurozone, so that its exchange rate matches its competitiveness. Sapen is forced to choose another solution: for Germany to spend more, invest more, and, I might add, it would be good a good if they increased salaries in order to reduce the excessive competitiveness."

Sterdyniak said that the reluctance of German companies to reinvest their profits is causing a disbalance in the Eurozone, as well as globally.

"I must say that European integration has also led to countries being able to reach fabulous competitiveness without fearing the negative exchange rate consequences. The competitiveness of Germany doesn't suffer because of an increase in the currency's value, and that disturbs the balance in Europe and the world."

"Germany should have a considerably higher exchange rate, which upsets the world equilibrium. German companies are highly profitable, (but) they don't invest their profits, which creates a disbalance in Europe and the world," Sterdyniak said.

Similar criticism of Germany has been made by the IMF and ECB, which have called on Germany to increase investments in order to stimulate import demand and assist global economy recovery.

© Sputnik / Anton Denisov
Czechs Want to Trade With Russia and Reject the Euro, Ex-President Tells Sputnik
At a meeting of the Asian Development Bank in Frankfurt in May 2016, ECB head Mario Draghi sought to lay some of the blame for slow economic growth in the Eurozone on "excess saving" by some countries.

On February 5, German Finance Minister Wolfgang Schauble agreed that the Euro exchange rate is too low for Germany, but said the European Central Bank was responsible for pursuing a policy that is "too loose" for Germany.

Van der Bellen: Citizens of EU to Decide Between Love for Homeland or for Europe