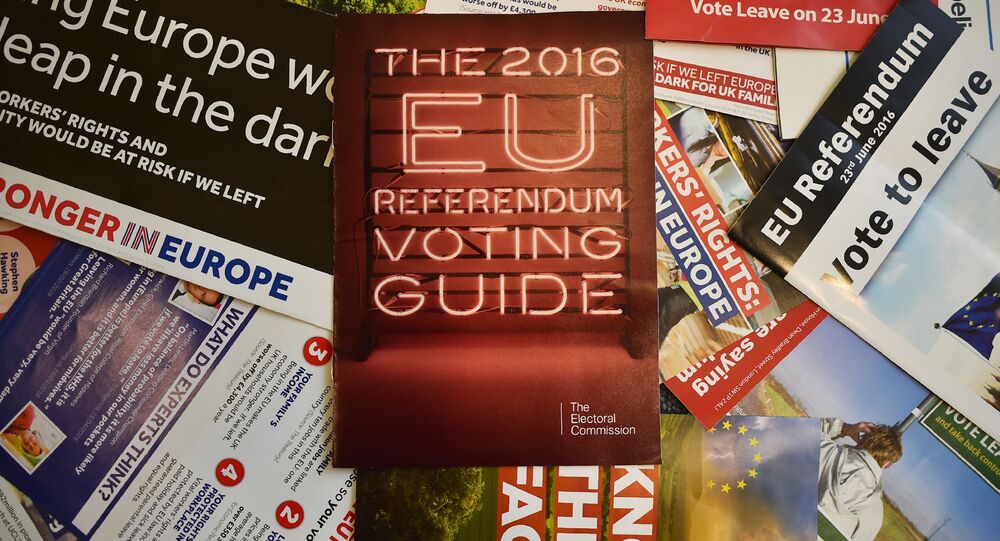 From Brexit to Spain's Podemos, to Germany's constitutional court challenge for the ECB, June will be a month of decisions that will define this year, the German newspaper Die Welt reported.

© AFP 2021 / ARIS MESSINIS
Secret ECB Docs Point to More Financial Mayhem on the Horizon
The 30 days of June will be this year's most important, and several events are set to change the world's political and economic landscape.

On Wednesday, German newspaper Die Welt began the month by listing some of the most important decisions that will take place.

In December last year the US Federal Reserve decided to raise its benchmark interest rate for the first time in ten years, by 25 basis points to 0.50 percent from 0.25 percent, which was followed by a plunge on the world's stock markets.

This time, traders estimate a 34 percent probability of another rate hike, which would again have a significant effect on the world economy, particularly for players in emerging markets who hope their dollar-denominated debt remains cheap to service.

The European Central Bank (ECB) will face a major challenge if Germany's Federal Constitutional Court in Karlsruhe rules that the Outright Money Transactions (OMT) program the ECB outlined in 2012 to calm the Eurozone is unlawful.

ECB chief Mario Draghi vowed to do "whatever it takes" to save the single currency, and proposed a bond-buying program which has been challenged by a group of German academics and politicians from the left-wing Die Linke party.

They are opposed to the OMT and the ECB's quantitative easing bond-buying program launched in March 2015, arguing that they constitute fiscal, not monetary policy, and as such extend beyond the central bank's mandate.

The OMT would allow the ECB to potentially buy unlimited amounts of government debt from countries in trouble that request assistance, thereby transforming itself into a de facto lender of last resort.

The plan has not been implemented, but in 2012 it succeeded in restoring confidence to eurozone markets by defusing speculation on the sovereign debt of highly indebted countries like Spain and Italy.

The European Court of Justice has ruled the OMT to be lawful, but Germany's Constitutional Court in Karlsruhe has already expressed doubts over its legality. If German judges rule against the OMT program they could also prohibit the Bundesbank, the ECB's largest shareholder (25.6 percent), from taking part in the program.

"Things could get even worse, particularly if Brexit becomes an example. Europe has been developing closer union for decades – now it could drift further apart. What happens if other states emulate the British and leave the EU? … If June 23 is the first day of a domino effect, the results could be disastrous," Die Welt reported.

Prime Minister Mariano Rajoy's conservative People's Party is currently leading in polls which give it 30 percent of the vote, but the left-wing Podemos Party led by Pablo Iglesias has just reached an agreement to ally with the green-communist United Left alliance. If that umbrella group can extend to the Socialists, Spain's conservatives would be outvoted.

The German newspaper believes a victory of the left, like in Greece, "Would be fatal."

"At 20.1 percent, unemployment (there) is as high as anywhere in the EU. The country is clearly going to fail to reach the Maastricht budget deficit limit of three percent this year. The future government must save €20-25 billion ($23 —28 billion), otherwise the continent is threatened with another disaster like Greece – only much worse."