Czechs Want to Trade With Russia and Reject the Euro, Ex-President Tells Sputnik 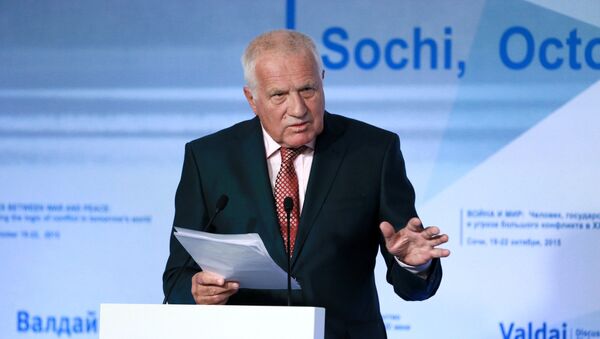 Sanctions against Russia haven't achieved anything and should be lifted, former President of the Czech Republic Vaclav Klaus told Sputnik.

"I think it would be rational to abolish them, nothing has been achieved by these sanctions, and the Czech Republic, I think, is not a fanatical supporter of these sanctions," Klaus said.

"I think these sanctions have undoubtedly weakened the Russian economy. God knows, I would like to see some kind of quantitative assessment, where it is concretely expressed. I think that, on the one hand, it has weakened trade, but more importantly, it has worsened the investment situation and led to number of foreign companies no longer investing in Russia – and that is a more serious effect than narrowing the range of goods. Of course, I know well that some of our businesses have paid for it. I just think it's stupid."

Obama Will Soon See His Sanctions Policy Against Russia 'Torn to Pieces'
Serving Czech politicians including President Milos Zeman and parliament speaker Milan Stech have also urged the lifting of anti-Russian sanctions, which were imposed in March 2014 after Crimea's decision to secede from Ukraine and join Russia in the aftermath of the Euromaidan coup d'etat.

Russia retaliated by launching its own sanctions on August 7, 2014, which affected the import of certain food products, such as cheese, vegetables, fruit and meat. The original decree signed by President Vladimir Putin declared the embargo would last for one year, but it has since been prolonged in step with EU/US sanctions. In June, the EU Council extended anti-Russian sanctions until January 31, 2017, and Russia extended its counter-sanctions until December 31, 2017.

Klaus, an economist who served as second President of the Czech Republic from 2003 to 2013, also said that he is a big opponent of the euro single currency, as are the majority of Czechs.

"I am a big opponent of the euro, I am a big opponent of a single European currency for very diverse countries. And I think this has been confirmed in practice. Also, I don't see any reason why the Czech Republic should join the euro area. In addition, all opinion polls show that people don't want it. I believe that this is the strongest 'no' in the whole of Europe, (although) I'm not sure how things are in Poland. They are a bit softer there."

Forecast for the Euro is Distinctly Cloudy as Le Pen Offers Return to the Franc
The European single currency project has been hit by a string of disasters such as the European debt crisis, the Greek bailout and the threat of insolvency hanging over Italian banks such as Monte dei Paschi.

According to an October 2016 poll, just 41 percent of Italians agreed that the euro was a good thing for their economy, a decrease of eight percentage points in comparison with the previous year.

Despite that public opposition, Klaus said it is unlikely that Italy will find the political will to leave the Eurozone.

"But I completely disagree with you that some countries plan to withdraw from the euro zone. I know that there is a huge problem in Italy, and I don't understand why they need to remain in the euro zone, but I have not heard any serious proposal that something like that (Italy leaving the Eurozone) could happen," Klaus said.

The former President added that while Brexit was a positive step for UK voters, such a referendum is unlikely to be held across the rest of Europe.

"I warmly welcomed it (the result of the Brexit vote), because in this way it was confirmed by millions of people that they don't want the current form of European integration. De-facto, the British were the only ones who got the opportunity to say it out loud. That's why such a referendum won't be held anywhere else, Brussels politicians have explained to all the countries that it's not worth doing anything like that," Klaus said.

"On the one hand, I think that it was an important signal, while on the other I don't think that there will be more exits. In that sense the UK was unique, an exception for 1,001 reasons, not least due to the fact that the UK is an island close to Europe, not a country somewhere in the middle of Europe like the Czech Republic for example. So I don't expect further exits, there might just be a softening of the conditions of the European unification process," Klaus said.