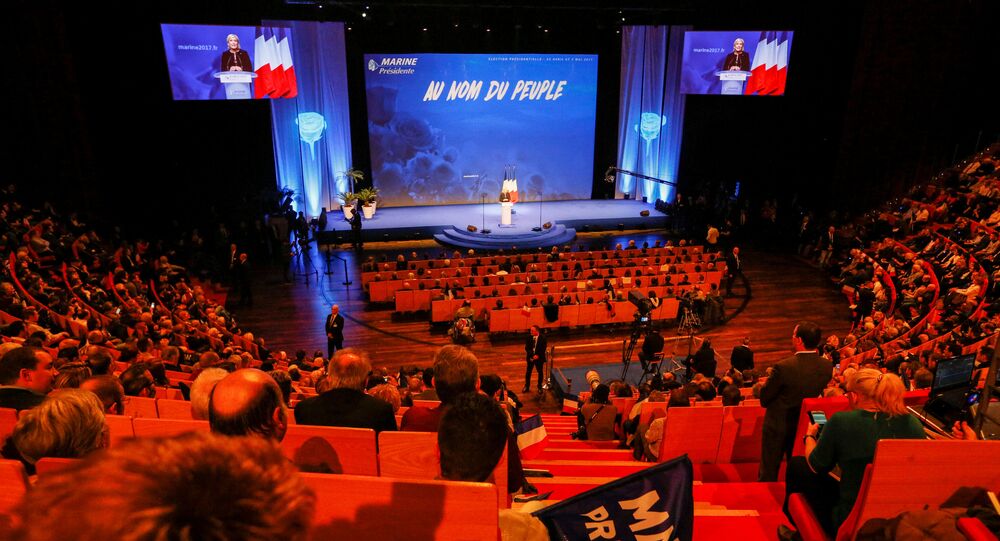 The launch of the Crosscheck project by Facebook and Google in collaboration with over a dozen French news outlets is an attempt to "fight the National Front" and prevent Marine Le Pen from winning the presidential election, Front National politicians told Sputnik.

© Flickr / Victor
Gang Rape Live On Facebook Leads To Three Arrests In Sweden
On Monday tech giants Facebook and Google announced the launch of the Crosscheck project, an initiative ostensibly intended to prevent false news stories from being distributed on the internet.

The launch of Crosscheck has been timed to coincide with France's presidential elections. The first round of the election takes place April 23, followed by a run-off between the top two candidates on May 7 if no first-round candidate wins a majority.

The project is run by First Draft News, which bills itself as a "nonprofit coalition," formed in June 2015 "to raise awareness and address challenges relating to trust and truth in the digital age."

The project is being launched in France on February 27, where Crosscheck has made agreements with 16 French news outlets, including AFP, Le Monde and Buzzfeed News. These news websites have pledged to "ensure that accurate reports reach citizens across the country and beyond."

Crosscheck is seen as a response to the recent election campaign in the US, where some news media expressed concerns that "fake news" distributed on Facebook persuaded the electorate to vote for Donald Trump over the overwhelming favorite for the Presidency, Hillary Clinton.

Many news outlets in Europe and the US are keen to draw parallels between Donald Trump and National Front leader Marine Le Pen, since they share a Eurosceptic, anti-immigration platform.

© AFP 2019 / ERIC PIERMONT
Ex-French Economy Minister Macron Could Be 'US Agent' Lobbying Banks' Interests
Davy Rodriguez, deputy director of the Front national de la jeunesse (FNJ), the youth wing of the right-wing party, told Sputnik Francais that the media involved in the Crosscheck initiative are interested in promoting their own candidates, at the expense of the National Front.

"We, in the National Front, are defending the idea of sovereignty. We are very concerned that giants like Google or Facebook are interested in these issues, and even more so that they are supported by media such as Libération, Rue89, Le Monde and La Voix du Nord. These are our political opponents, they openly oppose the National Front. This is media which supports a specific political camp," Rodriguez said.

"The fact that major US corporations are relying on this type of media, to destabilize French politics, is very, very alarming. All the more so, because of fear after the UK voted in favor of 'Brexit' and Donald Trump won the election in the US. We don't think it's normal for large corporations, Facebook and Google, to act in such a way. In any case, they know who their opponent is. The participation of groups such as Libération shows that this was done in order to fight against the National Front."

Rodriguez said that he opposes the interference of Google and Facebook in the French election, and cast doubt on the credentials of US companies to warn the French about "fake news."

"The US is a country which specializes in fraud and misinformation. We have seen what kind of propaganda was promoted by them during the conflict in Syria, the conflict in Ukraine. We have seen how they carried out destruction and then said, 'this is false information, this is disinformation.' In any case, who can take it upon themselves to say what is true and what is false when they are two and a half thousand kilometers away from what is happening? This is a real problem."

"This 'police' is on a par with the media, which sometimes support this or that political camp. We clearly see here a desire to restrain the extraordinary freedom of expression that exists in social networks."

© AFP 2019 / THOMAS COEX
France's National Front Aims to Win Over Jewish Voters With Trip to Israel
"This is an attempt to silence speech, to curtail the language of free speech. I find it absolutely outrageous. This is outrageous, not only because these online resources have assigned themselves the right to act in the role of the police, without having any qualifications to play this role, but they themselves can spread false information."

"It seems to me that the media are afraid of losing power and have assigned themselves a kind of power of the Inquisition, which from a democratic point of view, no-one gave them. This is a roundabout way of putting pressure on public opinion and the electorate from above, with the help of the millionaires who own these media outlets, to support a particular candidate or particular opinion. This is largely about the desire to manipulate information and infringe on freedom of information,' Collard said.

According to a recent opinion poll conducted February 6 by Ifop-Fiducial for Paris Match, iTélé and Sud-Radio, Le Pen is the leading candidate supported by 25.5 percent of voters.

In spite of concerns over the impact of so-called "fake news" on the US election, a working paper from academics at the universities of Stanford and New York shows that social media played a much smaller role in the US election than some might think.

“A reader of our study could very reasonably say, based on our set of facts, that it is unlikely that fake news swayed the election,” said Gentzkow, an economics professor and senior fellow at the Stanford Institute for Economic Policy Research (SIEPR), in a press release.

Over 60% of French Want Fillon Out of Election