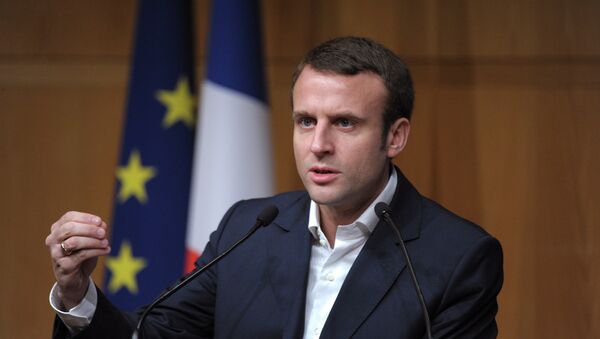 Controversial details regarding French presidential candidate Emmanuel Macron's personal and professional life as a banker and reforms that he carried out as the minister of economy hint at the fact that he could be acting in the interests of the US financial market in France, Republicans party lawmaker Nicolas Dhuicq said.

MOSCOW (Sputnik) — Macron, who made a career as an investment banker at Rothschild & Co before rapidly rising through the ranks in the Socialist Party and becoming the minister of economy, has emerged as a front-runner in the upcoming French presidential elections amid allegations that the wife of The Republicans' candidate Francois Fillon was fraudulently employed.

"Macron has been an investment banker at Rothschild bank. He's only had a professional career within the banking industry. Throughout his career, he has been acting as an agent of the big American banking system. He has never been elected before running as an independent for the presidency, something very rare at this level of politics in France. I think that the guy's only objective is [fulfilling] his personal ambitions, as he has no intention to pursue his political career if he loses the presidential race," Dhuicq told Sputnik, adding that according to his knowledge, "the controversial details of his personal life and ties [will] soon become public."

Before resigning from his ministerial post in August 2016 and launching a movement called En Marche!, Macron embarked on a series of labor reforms and budget-cutting measures as a minister.

"By analyzing his reforms, one can easily see that they were aimed at globalization and the opening of the market. He openly supports the idea of free global trade and markets. Besides, as the minister of economy, he facilitated the sale of big French companies to American corporations," the lawmaker said.

He recalled the case of the French company Technip, which provided services and technology to the oil sector.

"Macron strongly supported the merger and relocation of the Technip group with its American competitor FMC. In a way, this operation turned out to be a transfer of a successful French company to American control," Dhuicq asserted.

Since Macron announced his intention to run for the French presidency, the media has been questioning his independent status and independent views, given his active membership of the French American Foundation France (FAF), which is known as an influential organization aimed at selecting and bringing together future generations of leaders under the auspices of the Young Leaders program.

'Russian Card' in French Presidential Run is Not About Russia, Actually
It is noteworthy that the last two French presidents, incumbent President Francois Hollande and former leader Nicolas Sarkozy, are members of FAF, alongside many other French senior officials, business people and members of the media.

According to Dhuicq, before announcing his bid for presidency, Macron had traveled to the United States. He allegedly conducted controversial political correspondence with former US presidential candidate Hillary Clinton, WikiLeaks founder Julian Assange told the Russian newspaper Izvstia on Friday.

The young and good-looking independent candidate, who married his former high school teacher, a woman in her 60s, has an unconventional personal story and has featured in the spotlight of the French media. Macron was a high school student when he first met the drama teacher and a married mother of three. He moved to Paris where he graduated from ENA, France's elite finishing school for future presidents and ministers, but he kept in touch with the future Mrs. Macron, Brigitte Trogneux, who eventually divorced her husband and married Macron in 2007.

"Concerning his private life, it is becoming public as we speak… Macron is a guy who is called a chouchou, or a darling, of the French media, which is owned by only a few people, as we all know. Besides, one of the guys who backs him is famous businessman Pierre Berge, a business partner and long-time lover of Yves Saint Laurent, who is openly homosexual and advocates gay marriage. There is very wealthy gay lobby behind him. This says it all," Dhuicq said.

In November 2016, Macron publicly denied a persistent rumor that he's secretly gay and living a "double life." He also was denying any allegations circulated in the media that he used government money while a member of France's cabinet to launch En Marche!

According to a survey by the pollster Elabe for Les Echos, published on Wednesday, Francois Fillon would get 19-20 percent of the votes in the first round of presidential elections in France and would not make it to the second round, while Macron is now credited with 22-23 percent versus 26-27 percent for National Front leader Marine Le Pen.