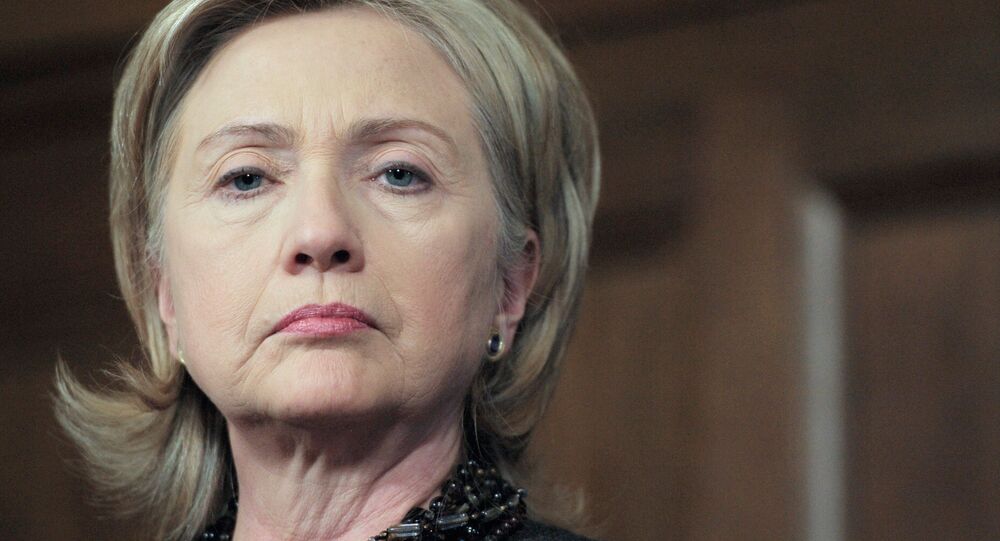 The former New York City Mayor argues that the severity of Hillary’s condition remains unknown to the public because the media has been aiding her throughout the campaign.

© AP Photo / Andrew Harnik
Media Blackout: Trump Surges Past Clinton in Major Poll, Press Cites Older Polls
Former New York City Mayor Rudy Giuliani, who served the city on the day that 9/11 struck and formerly was Hillary’s chief rival in her bid for the US Senate, struck once again about Clinton’s rumored health issues which have become a major talking point after video footage where it appears the former Secretary of State suffered a seizure in front of a cadre of reporters – the incident went unmentioned by the media until it appeared later on YouTube.

"All you’ve got to do is go online," Giuliani commented on Fox News. "Go online and put down 'Hillary Clinton illness' and take a look at the videos for yourself."

​Giuliani said that despite the former Secretary of State’s purportedly waning physical condition, which her rival Donald Trump frequently alludes to by questioning her "stamina" to fulfill the duties of the office of US President, he believes that she has a built in political advantage that has masked the severity of her condition.

"She doesn’t need to campaign," the former New York City mayor opined. "She has the New York Times, she has the [New York] Daily News, she has ABC, she has CBS, she has NBC. She has an entire media empire that constantly demonizes Donald Trump and fails to point out that she hasn’t had a press conference in 300 days – 200 days, 100 days, I don’t know how long – and fails to point out several signs of illness by her."

Giuliani’s thoughts about Hillary’s physical health has been derided by the media as a "conspiracy theory" or a "hoax" despite growing concern emanating from visuals of the former Secretary of State falling, the infamous seizure video and other visual signs that she may be suffering from a condition.

Clinton did resign from her post as Secretary of State somewhat spontaneously after suffering complications following a concussion. It has been widely rumored that Hillary Clinton may have suffered mild brain damage, either as a result of the immediate injury, or due to a mild secondary stroke.

Trump’s national spokeswoman, Katrina Pierson claims that the Democratic nominee exhibits symptoms of dysphasia, a neurological condition caused by a brain injury resulting in partial or complete impairment of the ability to communicate using speech. The basis for this out of the blue diagnosis by an individual with questionable, if any, knowledge of medical conditions remains uncertain as Secretary Clinton has shown herself capable of speaking before large rallies and, albeit not often, before reporters.

If Hillary does have a chronic physical condition, it may not disqualify her from office nor may it ultimately be viewed as any more than a fleeting fascination for the public. Two of America’s most revered Presidents, Franklin Delano Roosevelt and John F. Kennedy (JFK) both had debilitating health conditions. FDR, in fact, was unable to stand unaided under normal conditions – something that it seems Donald Trump currently suggests would disqualify the hallowed leader.