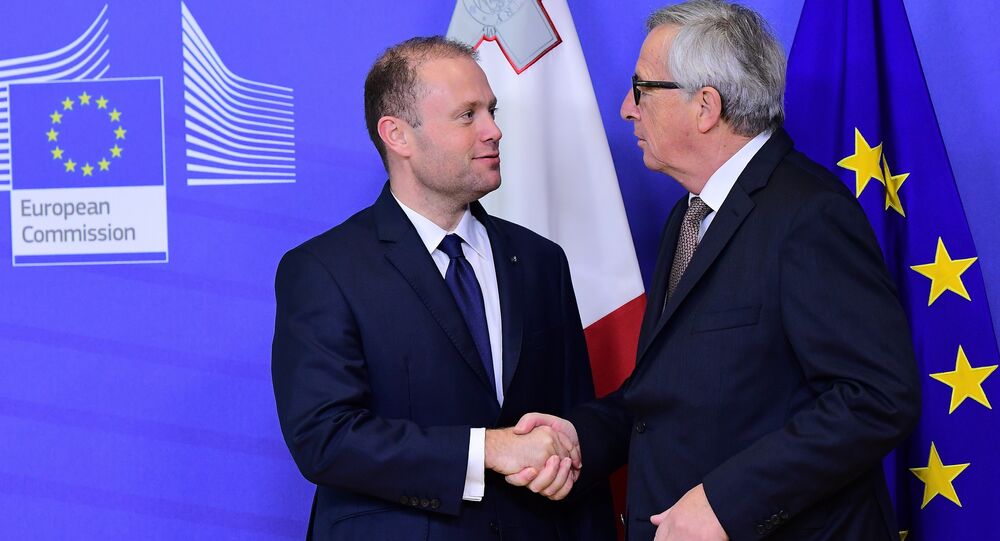 Malta, which became President of the European Union Council January 1, has been accused of being a tax haven by MEPs – and tax transparency campaigners have told Sputnik there's a serious risk the country could negatively influence EU tax policy over the course of its incumbency.

The dual issues of tax transparency and offshore tax havens surged in prominence over 2016, due to a cavalcade of scandals such as LuxLeaks, SwissLeaks and the Panama Papers.

As a result, confronting and rectifying these issues is said to top the EU's agenda in 2017, with EU finance ministers scheduled to finalize legal proposals requiring large multinationals operating in Europe to disclose profits earned and taxes paid "country by country."

Despite this push, group of Green MEPs have questioned whether this can be achieved with Malta at the Council's helm, and if the Maltese Presidency might actively hamper such efforts.

In a report published January 10, titled Is Malta A Tax Haven?, the group notes Malta helped multinationals avoid paying €14 billion (US$12.14bn) in taxes between 2012 and 2015 that would have gone to other countries, and would be deemed a tax haven under the EU's own principles.

Alex Cobham, chief executive of the Tax Justice Network (TJN), told Sputnik he agreed that there were "real risks and concerns" about Malta's EU Council Presidency.

"Malta's Presidency, coupled with Jean-Claude Juncker's Presidency of the EU Commission, means key levers of EU power are in the effective hands of two financial secrecy jurisdictions. A good indicator of whether Malta has influenced EU thinking and policy around tax havens will be how the EU's tax haven blacklist evolves.

"The first instalment of the list in 2015 was limited to non-EU jurisdictions, which is obviously ridiculous given how many effective tax havens operate within the EU. If Malta defends that position, they are obvious and unashamed opponents of serious transparency," Cobham told Sputnik.

Every two years, TJN publishes a Financial Secrecy Index, ranking countries according to their level of opacity in respect of tax and financial dealings. TJN's 2015 instalment ranked Malta 27th out of 70 countries for financial secrecy — and Juncker's home country of Luxembourg sixth.

There were several key findings in the Greens' report, including that while companies are theoretically subject to a flat 35 percent income tax in Malta, the highest in the EU, in reality companies can easily reduce their effective tax rate to a mere 5 percent, and company shareholders can receive a tax refund of up to six-sevenths of any tax paid.

In 2016, the EU executive deemed Malta's tax regime "too generous," and found the country offered a total of 14 "aggressive tax planning indicators," putting it ahead of even Luxembourg in a league table.

The group also raises doubts about Malta's ability to support and push through EU anti-money laundering and tax reforms, in light of the Panama Papers revealing Maltese Minister without Portfolio Konrad Mizzi and Chief of Staff Keith Schembri have offshore interests and were connected to Mossack Fonseca. Former Nationalist Party Minister Ninu Zammit's name was also among the list of Maltese names found in the documents.

Finally, the report found Malta had rarely sided with European countries that support tax reform since its ascension to EU membership in 2004. MEPs were particularly concerned that Malta's Presidential priorities not once mention the word "tax."

We are very optimistic on the level of collaboration between our Presidency and the European Commission — @JosephMuscat_JM pic.twitter.com/Z3erg5CCfy

However, Cobham is not entirely pessimistic about the prospects for tax transparency in the EU under Malta's Presidency. He added that there has been a growing tax transparency mood worldwide in recent years, aggravated significantly by the Panama Papers, and the degree to which Malta could resist that temper is questionable.

Moreover, he believes Brexit could have a positive effect on tax transparency in the EU.

"Given the UK's own virtual tax haven status, and its premier position in the offshore haven sphere — its overseas territories Bermuda, the British Virgin Islands, the Cayman Islands, Guernsey, the Isle of Man and Jersey all score highly on our financial secrecy index — the country has been a key voice lobbying for maintaining tax haven opaqueness in recent years. Now, the UK won't be able to influence EU discussions on financial secrecy, which can only be a positive for tax transparency in the EU. Whether the UK will become more secretive about offshore financial affairs remains to be seen," Cobham said.