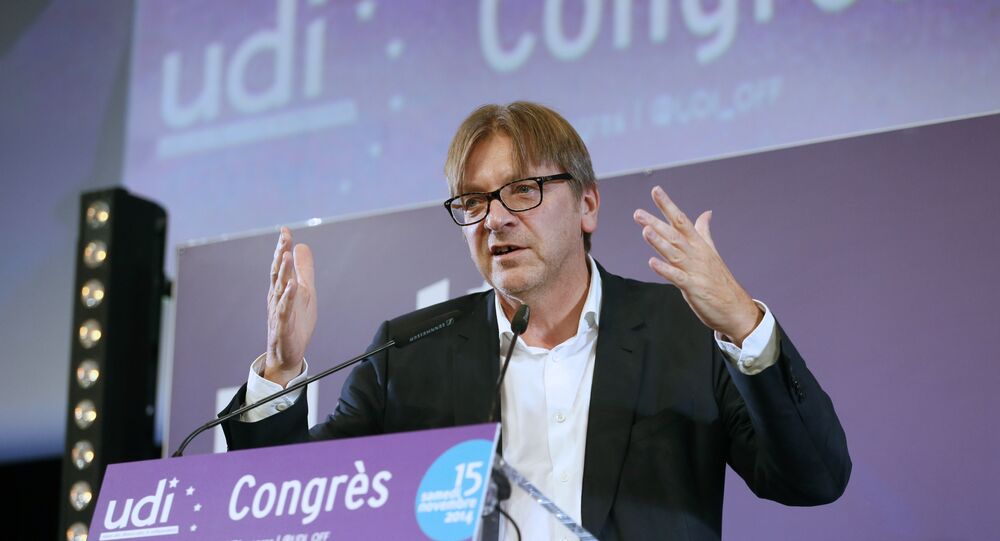 Guy Verhofstadt, one of the EU's chief Brexit negotiators, has likened US President-elect Donald Trump to Turkish President Recep Tayyip Erdogan and Russian leader Vladimir Putin, describing the latter two as being part of a “ring of autocrats,” who are trying to destroy the EU and its values.

The former Belgian prime minister, who leads the Alliance of Liberals and Democrats (ALDE) in the European Parliament, launched the extraordinary attack on Trump, Erdogan and Putin during a debate on EU-Turkey relations.

"Today there is a ring of autocrats around Europe; Erdogan, Putin, I'm not going as far to put [Donald] Trump in that little list," he said.

@GuyVerhofstadt the only real cronies are the fake bunch of third rate has beens at the EU. You have brought Europe to its knees

​While not directly putting Trump in the same category as Erdogan and Putin, Verhofstadt noted that "not only do they like each other, they also have one thing in common."

"They are all doing one thing: bashing Europe, bashing our values, bashing and fighting against our European democracy."

He warned against a "fifth column" of "cronies" in Europe, made up of "old puppets of Putin and the new puppets of Trump," who were trying to undermine and destabilize the EU.

Verhofstadt accused the Russian president of financing Euroskeptic groups within the bloc, while he took aim at Trump's appointment of Steve Bannon as his chief strategist.

​Bannon, regarded as a leading voice of the US alt-right, was one of the main forces behind the Brietbart News website, criticized by opponents for encouraging racial intolerance.

"Putin is financing even groups here in this parliament directly — all nationalist, populist and anti-European," Verhofstadt said.

​"And let's face it, Donald Trump is no better than that, his most important strategic adviser [Steve] Bannon wants to launch an extreme right-wing website — Breitbart.

US-Russo-Turkish Plot to Bring Down EU

Continuing in his scathing attack, Verhofstadt implied there was an international plot to weaken the foundations of the EU, by encouraging euroskepticism in some parts of the bloc.

"What I see today is now Russia, Americans and Turks working together on European soil to destroy the European model," he said, calling on Europeans to "fight back" against them.

If the EU's top Brexit negotiator Verhofstadt can call the US President-elect a "clown", it must give licence to us to call the EU "clowns"!

​The attack on some of the EU's most important or crucial partners has been viewed by many as extraordinary, particularly at a time of heightened tension with Russia and Turkey, which is combined with a period of uncertainty regarding the Trump administration's approach to Europe.

@GuyVerhofstadt What about lousy job by european "leaders"? Putin dont have to do anything. Just sit back and watch as your stupidity works!

Verhofstadt, who is one of the EU's most senior Brexit negotiators, also took time to take a swipe at chief euroskeptic and long-time rival Nigel Farage, who Donald Trump recently suggested could be a great British ambassador to the US.

Trump wants to take over her Majesty's role in appointing the British US Ambassador. Is that "taking back control"? https://t.co/GzgVIlDrfF pic.twitter.com/S7Md5DBl02

​"And Mr. Trump wants even to take over the task of her Majesty the Queen, by appointing the ambassadors in the future for Britain.

"I'm only asking myself, Mr. Farage is not here, but it should be interesting if he could tell us is that 'taking back control' in Britain?

"I think one clown in Washington is more than enough, we don't need more than that."

EU Not the Only Option, Turkey Discusses Accession to SCO - Erdogan