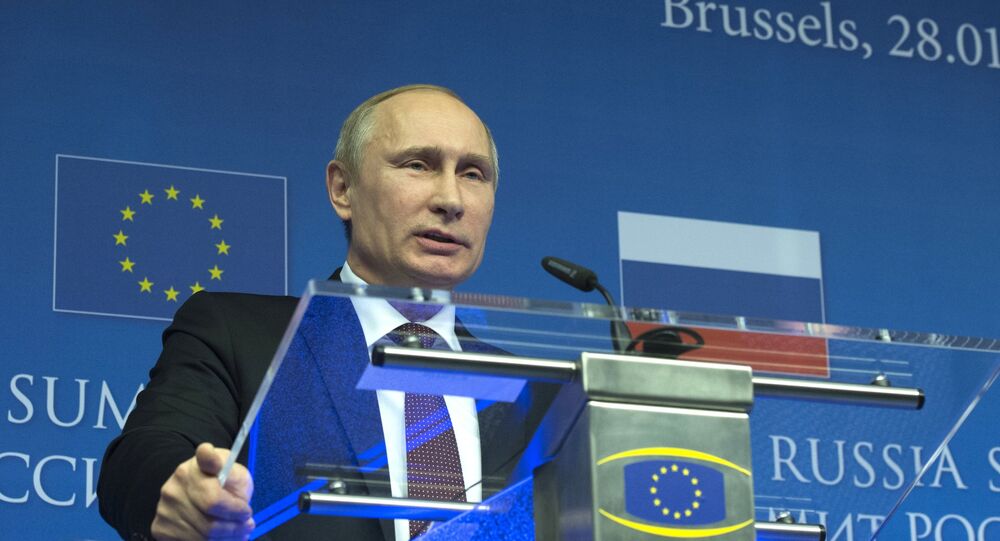 Following Donald Trump's US election win, much has been said about Washington's approach towards Europe and Russia. While it's unlikely the US will dramatically change its Russia policy, more EU states will try to ease anti-Russia sanctions, an academic on EU-Russia relations has told Sputnik.

Trump's language has also prompted fears of an EU-US split on the issue of Russia, particularly on defense, forcing EU foreign policy chief Federica Mogherini to insist that Brussels will continue to pursue its stance, regardless of Washington's actions.

​"The European Union has a very principled position on the illegal annexation of Crimea and the situation in Ukraine. This is not going to change, regardless of possible shifts in others' policies," Mogherini said after meting with EU foreign ministers.

"I see the need for the Europeans to strengthen their defense and security agenda and cooperation, regardless of the changes in the administration in the United States," she added, in a reference to Trump.

Today on my blog: Europe’s responsibility after the US vote https://t.co/XJLdB9nNmR pic.twitter.com/dY4hd9gCIT

Dr. Cristian Nitoiu, fellow in EU-Russia relations at the London School of Economics, told Sputnik that although Trump's election win is likely to create some kind of split between the US and the EU, it is unlikely to have an immediate impact on either side's relationship with Russia.

"There's certainly going to be a split because to be honest, no one really likes Trump in Europe. Trump is seen as someone who stands against most of the values that the European Union wants to promote, like openness, multiculturalism… anti-discrimination and also climate change. So I don't think any European leader will side with Trump, at least not in the near future in terms of the US policy towards Russia," Dr. Nitoiu told Sputnik.

​"But at the same time I think it will be very hard for President Trump to change the course of US foreign policy towards Russia, especially in terms of the annexation of Crimea… The United States was part of the Budapest Memorandum, which safeguarded the territorial integrity of Ukraine. So I don't think the United States will turn 180 degrees against that commitment and recognize the annexation of Crimea."

While Russian officials have said they are open to working with the incoming US administration, they have remained cautious as to whether they believe Trump's presidency will have an impact on US-Russian ties.

While Dr. Nitoiu says it seems unlikely the US under Trump will engage in a dramatic policy shift relating to Moscow, he added that the EU is far from united in its support of implementing sanctions on Russia.

© AP Photo / Virginia Mayo
Trump-Led Thaw Between Russia, US Likely to Undermine EU Unanimity Over Anti-Russian Sanctions
"We need to bear in mind that the EU's approach towards Russia is very much divided. Even though we've had a common stance towards Russia in the last two years, there are many debates within European countries and future elections next year in France and Germany will definitely have an important effect on how the European Union will construct its approach towards Russia. If, for example, politicians who are more pro-Russia are elected in France or Germany, most probably the European Union will try to come to some sort of compromise with Russia."

​Pointing to the recent election wins in Bulgaria and Moldova of candidates calling for a re-think of ties between European countries and Russia, Dr. Nitoiu believes some smaller EU member states could hold the key to the future of the EU's policy.

"We should also look at the smaller states because those are actually much more important. They are the ones actually who feel threatened by Russia, and if those states stop lobbying for an anti-Russian approach in the European Union, then it's more likely that we'll see an easing of the sanctions, but we'll probably also see a weakening of this common front against Russia," he said.

​"In terms of sanctions, many states in the EU have been arguing for the past year that sanctions should be dropped, so regardless of what President Trump will do, I think there will be a period of reflection over the next six months and probably a lot of debate about whether sanctions should be dropped… So most probably we'll see in the next six months that some or most of the European states will try to ease the sanctions against Russia."