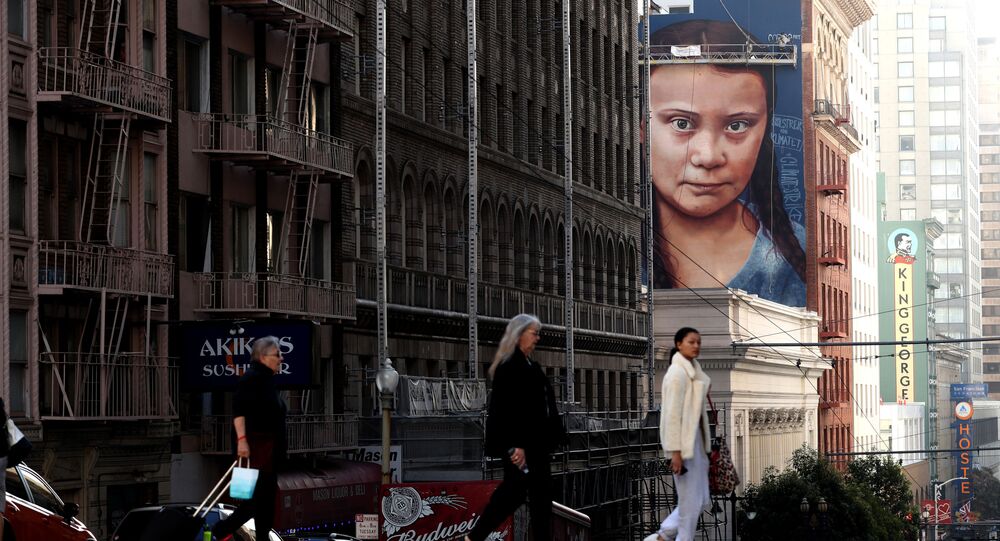 Land-Lover: 'Climate Greta' Becomes Seasick in Rough Waters on Her Way Back to Europe

The 16-year-old climate activist, who eschews aeroplanes, is currently on board the 15-metre catamaran La Vagabonde sailing from Virginia to Portugal to arrive at the climate summit in Spain in good time.

Greta Thunberg's return trip across the Atlantic is off to a rough start. The 16-year-old climate activist has been seasick, together with other crew members, sailor Nikki Henderson reported.

“Seasickness took Greta, Elayna and Lenny out of action last night. Riley and myself spent the night making as much ground as we could. We have flown every sail on the boat already - which is a lot of work physically hoisting and dropping,” Henderson wrote on Facebook, posting a photograph of the exhausted crew gathered for a meal.

The conditions are thought to have been so severe that they had to change the initial route, in order to avoid the strong headwinds. The last time the couple crossed the Atlantic, captain Riley Whitelum was so badly injured that he thought he had broken his neck.

Greta herself confirmed that the journey had a rough start.

“Yesterday was quite rough conditions in the shallow waters off the coast. Today much nicer,” she wrote on Instagram.

Day 2. In the Gulf Stream. Yesterday was quite rough conditions in the shallow waters off the coast. Today much nicer. Slept really well. Great to be back on the ocean! @elayna.carausu @riley.whitelum @_nikkihenderson

Later, however, she seems to have recuperated enough to pose with her trademark Schoolstrike for Climate placard.

The Swedish teenage activist and figurehead of the Fridays for Future movement refuses to fly due to her commitment to the environment. As she was left stranded in the US, since the UN climate conference she intended to partake in was moved from Chile to Spain, she pleaded for help.

Ultimately the 16-year-old activist was offered a ride by the Australian YouTuber couple Elayna Carausu and Riley Whitelum, as well as British adventurer Nikki Henderson. On board, Greta has the company of her father, Svante Thunberg.

Earlier this year, the teenage activist, who avoids aeroplanes due to their carbon footprint, took a sabbatical from school and sailed from Europe to New York on board the “zero-emission” racing boat Malizia II. In subsequent weeks, she toured the Americas by train and electric car, meeting fans, giving lectures and leading school strikes.

While campaigning for the environment and marketing her new book of speeches, the teenage star was honoured by several controversial murals devoted to her persona. Despite Thunberg's environmental commitment, he followers seemingly had no qualms about using a massive amount of toxic aerosols to make a tribute. Many found Greta's recent mural in San Francisco “creepy” and stressed that she had striking similarities with Russian President Vladimir Putin.

I thought this was Putin. https://t.co/hOuQSmVPpn