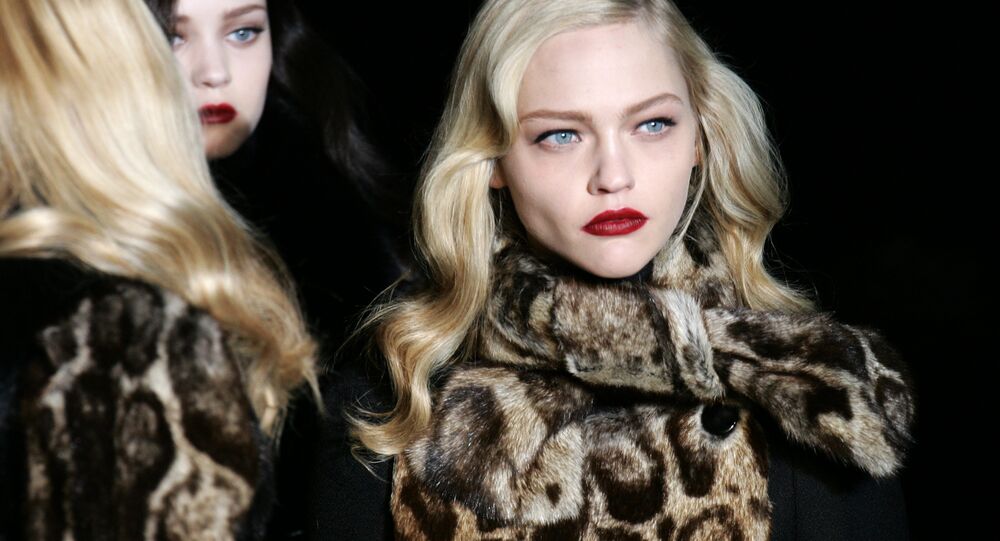 Luxury fashion brand Gucci is to stop selling real fur from next year, in an effort to move towards "sustainability". The fur industry said the decision was "unfortunate" and it pointed out fake fur was actually more harmful to the environment.

Gucci is to go "fur-free" from next spring, joining Armani, Ralph Lauren and Stella McCartney, in eschewing the use of mink, sable, fox, rabbit, coyote or raccoon. But the fur industry has hit back and said production and sales remains strong.

"Gucci's decision is unfortunate but the fur trade is not particularly negatively affected and remains strong and robust," Mark Boyle, director of standards, welfare and environment at the International Fur Federation (IFF) told Sputnik.

Gucci CEO Marco Bizzarri has announced the Italian brand will remove ALL fur from collections as of spring/summer 2018! 🦊 A little victory! pic.twitter.com/QBpfw0IOWW

"The fur trade can be shown to be stronger than ever. Last year it had a retail value of US$30 billion and production is extremely strong in the US, Canada, Denmark and Finland," he told Sputnik.

Denmark is the world's largest producer of mink with an annual production of 17 million skins but Russia, Norway, Sweden, Finland, Iceland, China, Poland and the Netherlands are also major producers.

Please share the fantastic news that Gucci is to become fur-free. A milestone in the campaign. Spin that fur trade!https://t.co/cc7BlUKws2

​"Record numbers of fur are being produced and many of the higher value brands see the worth in fur and you can see that on the catwalk with brands like Fendi, Yves St Laurent and Dior using it," Mr. Boyle told Sputnik.

"Being socially responsible is one of Gucci's core values, and we will continue to strive to do better for the environment and animals," said Gucci chief executive Marco Bizzarri.

THIS is life for animals who are killed for their fur 😰 pic.twitter.com/7XAVhIupwS

​Ingrid Newkirk, the founder of People for the Ethical Treatment of Animals (PETA), welcomed Gucci's decision.

"After more than 20 years of PETA protests against Gucci's kangaroo-fur loafers and seal-fur boots, Gucci has finally pledged to join Armani, Ralph Lauren, and Stella McCartney in the ranks of fur-free fashion houses," said Ms. Newkirk.

"The writing was on the wall: Today's shoppers don't want to wear the skins of animals who were caged, then electrocuted or bludgeoned to death. Until all animal skins and coats are finally off the racks of clothing stores worldwide, PETA will keep up the pressure on the clothing and fashion industry," she added.

These animals will no longer be killed for @Gucci:
— Minks
— Coyotes
— Raccoon dogs
— Foxes
— Rabbits
and more ❤

​But the IFF claims real fur is better for the environment than fake fur.

"Fake fur is extremely harmful to the environment, isn't biodegradable and negatively impacts wildlife thanks to the petroleum and plastics used to produce it," said Mark Oaten, CEO of the IFF.

Earlier this year, animal rights campaigner Pamela Anderson pledged to send a coat made of Russian eco-fur to US President Donald Trump's wife, Melania, a frequent wearer of real fur.

Mrs. Trump later wrote back to Anderson to thank her for the "beautiful" coat.