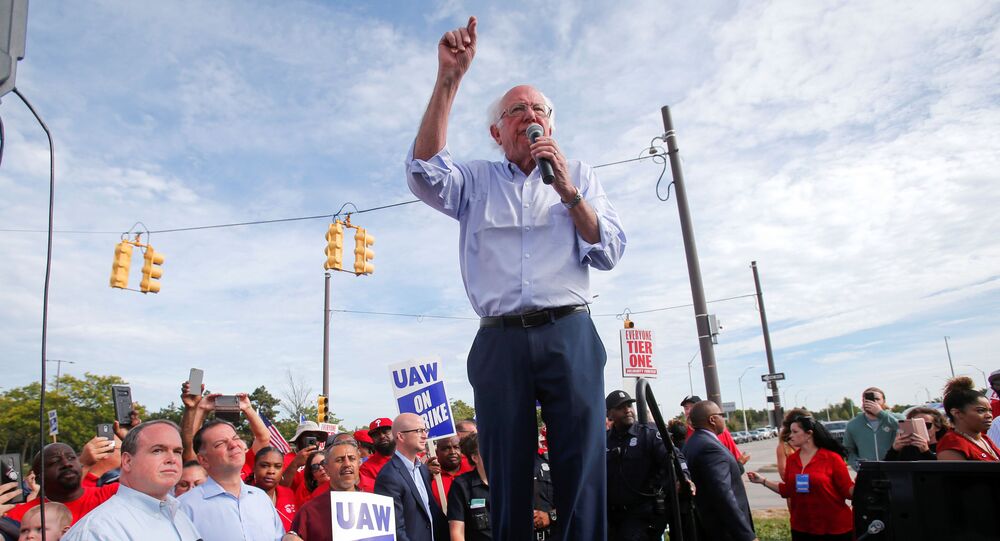 All of my adult life I have been a socialist who believes implacably in the inherent goodness, compassion and empathy which underlines and defines humanity.

Of course darkness and evil lurks constantly and seeks to eclipse the kindness and care which makes life beautiful and sustainable but in that struggle between good and evil, right and wrong, justice and injustice it often takes courage, vision and stamina to stand up for the persecuted, the voiceless, the minority or the dispossessed. The powerful have everything going for them. They have the wealth, the social status, the authority, the corporate media platform. They have the power. Those of us seeking to fundamentally change society are disadvantaged but we must never give up or give in.

One man who epitomises that struggle for progressive change in society right now is American Senator for Vermont Bernie Sanders. While many across the world look to the most powerful and richest nation on the planet and see nothing but the darkness of thunder under Trump, increasing numbers both within and outwith the US see instead the rainbow of Sanders. A man who has been on the right side of the people and actively opposed to social injustice all his adult life which has included holding public office since 1981 when he was elected Mayor of Burlington.

Most of the time Bernie Sanders has operated outside the rotten well of two-party politics which pollutes America and won election as an Independent and a declared democratic socialist. He has won election after election with hefty majorities because he speaks truth to power and refuses to bend the knee and play the tune of establishment dogma demanded by the corporations who effectively run America and American politics.

Often the differences in substance between Republican and Democratic candidates are either minute or non-existent. Both tend to be millionaires backed by billionaires and always they defend the status quo of obscene wealth and power inequalities which scar America.

While Barack Obama talked a good game and delivered some excellent speeches, his domestic record on tackling the tax-dodging billionaires and corporations was woeful while his overseas record in relation to illegal bombings, use of deadly drones and killing of innocents was downright criminal.

The 2009 Nobel Peace Prize winner illustrated just how grubby and tarnished that award is when the Obama record of bombings in 2016 alone revealed that his administration had dropped at least 26,171 bombs on at least 7 countries with civilian death tolls running into thousands. In other words, the gentle Obama, so-called dove of peace, managed to drop 72 bombs a day, 3 bombs an hour, 24 hours a day in his last year of office alone.

No wonder so many supporters in 2008 had become deeply disillusioned in him by 2016. He became a jackal of war while in the White House and continued the US tradition of ignoring international law in relation to military interventions and treating civilians as legitimate targets.

His Secretary of State during some of his bloodiest escapades was Hilary Clinton. She proved to be gung-ho with thousands of innocent lives abroad, including thousands of women who either perished or survived to be battered, raped and/or sold into slavery on the back of the wholly irresponsible and illegal bombing of Libya and support for jihadists groups who opposed Gaddafi but also opposed human rights and freedoms for women. Some feminist Libyan bomber Hilary turned out to be…

On the back of disillusion with Obama and the realisation that Hilary Clinton represented nothing more than the American Establishment, it is little wonder that major sections of the American working class, black and white, refused to campaign or vote for Hilary Clinton.

Sure she won more votes than Trump the millionaire reactionary with no political experience or track record but his claim to be different and not part of the cosy Washington Establishment Elite played well across the country in areas and communities largely left behind and condemned to survive on low wages, insecure jobs, failing public services and a disgracefully inadequate health service. Trump correctly characterised the political elites as a swamp of nepotism, privileged entitlement and wanton disregard for the plight of the struggling working class. He consistently pledged to ‘drain the swamp’. It was a popular pledge but one he could never deliver as he emerged from and lives in that very swamp of insulated wealth and power.

Clinton was the wrong candidate to take on Trump. It should have been Bernie Sanders. He fought a tremendous campaign to secure the Democratic nomination in 2016. He was roundly dismissed by the Democratic machine and the elites scoffed at his efforts. However, his radical demands for living wages, universal healthcare and radical taxation of the rich and corporations engendered huge support and enthusiasm from rank and file Democratic Party supporters, particularly young supporters.

From an outsider he became a serious contender and although he eventually ran Clinton close and took 43% of the delegate votes to her 55% it has now been admitted that the vote was actually rigged against him and Clinton only won the nomination on the basis of Democratic Party bosses cheating to stop Sanders becoming the Presidential candidate, a fact that Party now desperately tries to deny.

Today Sanders carries the hopes and aspirations of millions on his shoulders. He really is the man of the moment, the man who could not only take on and beat Trump but actually tackle the atrocious inequalities which infect American society like cancer. This is a man who oozes integrity, honesty, intellect and courage to match his convictions. The corporate media and Democratic bosses are anxious to undermine his chances of securing the Democratic Party nomination at every turn. They constantly promote Joe Biden instead, a man steeped in Establishment toxins and tarnished by his record on race and time in office as Obama’s Vice-President. Biden is the perfect candidate for Trump. He will be portrayed as part of the Washington swamp Trump pledged to drain.

Sanders, on the other hand, will swat Trump like a troublesome mosquito. He will expose him as the privileged son of the elites who never had to struggle a day in his life as everything was laid on a plate for him. He inherited and then squandered millions and bankrupted several businesses. His record of treatment of workers is disgraceful. His practice of serial lying is now a matter of fact with his number of outright lies or seriously misleading claims now numbering more than 10,000.

Sanders is 78 years of age and would be the oldest President to ever be elected. At the start of October, he had a heart attack and many have rejoiced in that health scare. It will be used against him throughout the Democratic nomination campaign. Sure he is older than others seeking the nomination but his energy, enthusiasm and commitment remains undaunted and makes the issue an irrelevance.

Within a week of his heart attack and the placing of two stents to improve the arterial flow of blood to his essential muscle he was able to report a remarkable third-quarter total of $25.3 million raised for his campaign, more than any other candidate. The total is not just remarkable because of the size it is even more remarkable because he refuses corporate donations and targets individual small donations and contributions from progressive campaigns and trade unions.

The single most common occupation recorded on the individual donations is “teacher” and the three most common employers of the individual donors are Starbucks, Amazon and Walmart. Those are three of the big companies Sanders has outed and shamed for paying below living wages while continually paying little or no tax on their billions of profits.

Sanders is securing real and tangible support from the working class of America. The low paid Starbucks, Amazon and Walmart employees see him for the honest and true politician he is and are willing to financially support him despite their low wages. The fact so many hard-working and stressed teachers are also backing him is testimony to the vision he promotes and the hope he offers.

His campaign video is awesome and inspiring. He uses his heart attack to illustrate the urgent need for a universal healthcare system for everyone to replace the current insurance-based system which denies millions any cover and makes billions for insurance companies and drugs companies but fails ordinary citizens. He also brilliantly contrasts his health adversity with the much worse adversity faced every day by the 500,000 homeless who literally sleep on the streets across America and the tens of millions struggling to survive on inadequate wages daily.

Bernie Sanders is a clever, compassionate and courageous socialist who would make a brilliant American President. No wonder the most radical and progressive sections and leaders of the Democratic Party are endorsing him enthusiastically.