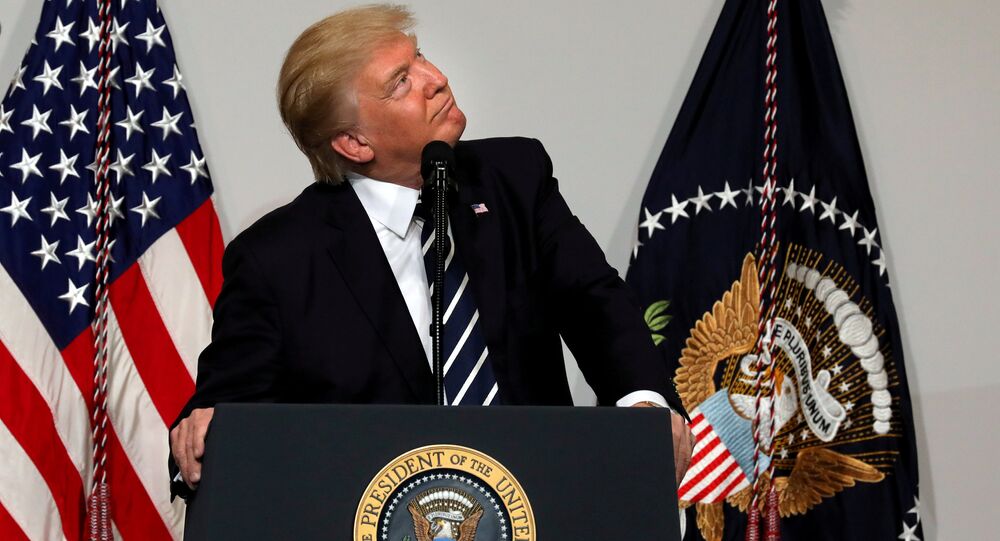 The United States of… False Flags

The United States government is the world leader in purveying false flags and propaganda stunts. Or, more generally, downright, systematic lies. To justify the outrageous violation of international law, wars and aggression.

© AP Photo / Pavel Golovkin
Trump's Former Adviser Page Stresses All Dealings With Russia Above Board
Current president and Commander-in-Chief, Donald Trump, is himself the object of fraudulent US intelligence, accused of "collusion with Russian agents." In a rare admission, the Washington Times this week described the US intel dossier against Trump as "riddled with fiction."

Yet, ironically, Trump, in turn, serves as a shameless conduit for US propaganda to fuel conflict with Syria and North Korea.

In the latter case, a world war could break out at any moment as a result of insane American goading. The dispatch of a US nuclear-powered submarine to the Korean Peninsula this week is just another reckless provocation by Trump.

Russian Deputy Foreign Minister Gennady Gatilov said the latest US sanctions were "unfounded" since there is no proof that the Syrian government used chemical weapons in Idlib Province on April 4.

Indeed, several respected international authorities, such as American professor Theodore Postol, a weapons expert at MIT, have dismissed official US claims about the chemical incident. The only "proof" provided by the US government and Western media are videos of alleged victims. That is, videos supplied by al Qaeda-linked terrorists and their media agents known as the White Helmets. This terror nexus is a creation of US, British and French military intelligence, financed with Saudi and Qatari money.

© REUTERS / Ammar Abdullah
False Flag Attack: Ex-CIA Officer Unravels Idlib Chemical Incident
Thus, the April 4 chemical incident in Idlib was plausibly a "false flag" staged by Western-sponsored terrorist proxies to elicit American military attack on Syria. In other words, innocent people, including children, were murdered with lethal chemicals, and the whole macabre spectacle videoed for dissemination by the Western news media. It would not be the first time. The August 2013 "chemical weapons" incident near Damascus was probably also another macabre set-up by the terror groups.

So, here we have an American president citing a false flag orchestrated by his own intelligence agencies to justify his subsequent order for a missile strike on Syria on April 7. And now we see the US government slapping punitive sanctions on Syria as a further warped response.

© AFP 2021 / Omar haj kadour
What's Behind US, EU's Reluctance to Investigate Idlib Chemical Incident
Of huge significance is the fact that the US, Britain and France have blocked Russian, Iranian and Syrian demands for an impartial on-site investigation to be carried out in the town of Khan Shaykhun where the chemical incident allegedly happened. As Russia’s Foreign Minister Sergey Lavrov pointed out, the Western powers do not want to find out what really happened because that would interfere with their agenda for regime change in Syria.

By way of shoring up the false narrative on Syria, this week US media carried "reports" alleging that North Korea has been supplying the Syrian government with chemical weapons technology. As usual, no verifiable evidence is presented, just more bombastic assertions and concocted claims.

But we can see where this is going. US intelligence, mouthed by its president and controlled media, are laying down dots to entice the Western public to join up with false logic and prejudice, all so that the US authorities can give themselves a legal, moral mandate to justify aggression. Conveniently, the contrived North Korea-Syria connection allows for two birds to be hit with one stone.

© AFP 2021 / AHMAD AL-RUBAYE
US Interventions in World Politics
The pattern of deception here by the US government, aided and abetted by propagandizing "news services," is classic modus operandi. Time and again, down through history, the US ruling class have used false flags, distortion and outright lies to promote their hegemonic desires of inciting war, conflict and aggression.

For a country like the United States, which has been waging war on other foreign nations for over 95 per cent of its history since its foundation as a modern state in 1776, it only stands to reason that such an astounding record of belligerence, decade-after-decade, must inevitably require a concomitant warmongering propaganda system in order to make it all possible.

We could mention, for example, the deliberate sinking of one of its own warships, the USS Maine, in Havana Harbor in 1898, which was used to instigate the Spanish-American War. That war was key to the US emerging as an imperial power in the Western Hemisphere.

© Sputnik / Mikhail Voskresenskiy
Pentagon's Airstrike in Syria Resembles Washington's 'Pretext to Vietnam War'
The later sinking of the civilian passenger ship, the Lusitania, in 1915 off Ireland is another case of deliberate sabotage, to frame-up the Germans, which the US then used to launch itself into the First World War.

More recently, the fabricated US claims of Afghanistan sheltering al-Qaeda terrorists and weapons of mass destruction in Iraq were invoked to sell American wars of revenge for 9/11 terror attacks in New York, which were themselves most probably propaganda stunts staged by US intelligence.

Another flagrant case of US authorities mounting a false flag was the Gulf of Tonkin incident, which served as a pretext for American escalation of the Vietnam War. In 1964, communist North Vietnam was framed up for allegedly firing on a US navy vessel. That incident allowed the US government to dispatch conventional armed forces to Vietnam. Some 50,000 US troops were killed in that 10-year war, as well as three million Vietnamese. The only beneficiaries were US corporations and the Pentagon war machine.

© RIA Novosti . Ilia Pytalev
Just Try It: Influential US Think Tank Recommends Attack on Russia's Kaliningrad
Of course, the US is not unique in using false pretexts to cover for acts of war and criminality. But there can be little doubt from any objective study of history that the US stands out – without any compare – as the biggest purveyor of false flags, lies and propaganda to promote its warmongering. Warmongering that has destroyed dozens of countries around the world and inflicted tens of millions of deaths.

Today, we are on another cusp of US-led war. Syria has been set up with a brazen false flag over chemical weapons, which in all probability is a sickening charade by Western-sponsored terror groups.

Russia and Iran, by extension, are smeared as part of an "axis of evil" by the US propaganda system owing to their otherwise principled alliance with Syria to defeat Western-backed terrorist proxies.

© REUTERS / Kim Hong-Ji
Why Pence's Threats Against N Korea Are 'Nothing More Than Bluff'
Most alarming is the US false flag effort against North Korea. This small, independent nation, which is not at war with anybody, is, in fact, a victim of American aggression – an aggression involving the sailing of nuclear-powered submarines and warships to its coastal waters.

And yet US President Trump, whose country has thousands of nuclear weapons enough to destroy the entire planet, is labeling North Korea as the "world's number one threat."

The United States is the most dangerous terrorist force on Earth, largely because it is run by rulers who forge lies all the time for waging wars and obliterating humans. The supposed Commander-in-Chief President Donald Trump is himself a target of US lies. Can you get any more deranged than that?