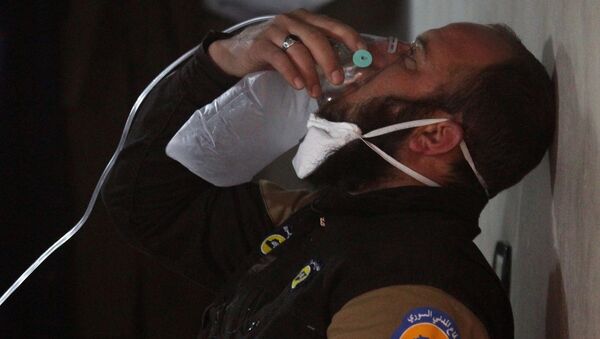 While US Defense Secretary James Mattis is pushing ahead with the claim that the Assad government still has chemical weapons, former CIA officer Robert David Steele told Radio Sputnik that the claim bears no relation to reality and added that evidence mounts that the Idlib incident was a false flag operation.

"We now know from a source that serves on the staff of one of three American traitors that I will name: Senator John McCain, former CIA Director John Brennan, and National Security Advisor Lt. Gen. Herbert McMaster  — [that] they conspired with Israel and Saudi Arabia. The White Helmets were paid over $300,000 and this was a false flag attack and an MIT professor [Theodore A. Postol] provided superb analysis which says that it was a ground improvised-explosive device and that was not sarin gas," Steele said.

He referred to MIT professor of Technology and National Security Policy Theodore A. Postol's research busting the US intelligence report blaming the Syrian government for the suspected attack in Idlib province.

"This was a false flag attack carried out and organized by American traitors working with Israel and Saudi Arabia," the former CIA officer reiterated.

Speaking to Sputnik on Tuesday, Syrian President Bashar al-Assad said that the alleged use of chemical weapons in Khan Shaykhun was actually a false flag operation, which was supposed to justify a US missile strike on a Syrian air base.

"This is totally correct," Steele remarked commenting on Assad's statement.

What was the reason for the alleged false flag operation?

World
Probe Into Idlib Attack 'Unlikely to Change West's Stance on Assad'
The former CIA officer pointed out that different geopolitical actors are pursuing their own goals. For instance, Saudi Arabia wants Syria so that they can run a pipeline to the sea and not be dependent on the Strait of Hormuz for shipping.

On the other hand, "Goldman Sachs wants war in the Middle East because they made some very bad bets on oil and they are about to lose a ton of money and a war will drive up the price of oil," Steele explained.

For their part, US neoconservatives want a war in the Middle East "because that's what Israel pays them to want."

Russian UNSC Veto Allowed for Prevention of Syria's Dismemberment - Syrian Envoy
The only people who don't want a war are everybody else in the American public, according to the former intelligence officer.

Steele pointed out that the American people's growing anti-war sentiment shouldn't be underestimated.

On April 13 Eli Lake of Bloomberg reported that General H.R. McMaster's critics accuse him of seeking to beef up the US military presence in Syria.

According to Steele, a full-scale US military operation would deal a tremendous blow to Donald Trump's presidency.

"If Donald Trump puts troops on the ground in Syria, I predict that he will be impeached," the former intelligence officer told Radio Sputnik.

Steele assumed that, purportedly, it could have been yet another goal of the so-called American "deep state" — "to subvert and control the legitimately elected President of the United States of America."

Meanwhile, US Defense Secretary James Mattis is pushing ahead with the narrative that the Syrian government still possesses chemical weapons. His claims come as the US and EU decision makers try to block attempts to launch an impartial investigation into the chemical incident in Idlib.

"Secretary Mattis is an honorable man in principle," Steele responded, "but this is an absolute lie. Now, whether he is saying this knowing that this is a lie or whether he has been lied to by the Central Intelligence Agency or the Defense Intelligence Agency I do not know. But it is absolutely a lie. A Nobel Peace Prize was awarded to those who successfully and comprehensively removed all chemical weapons from Syria in the past."

"We know this was a false flag," Steele added.

Robert David Steele is a former Central Intelligence Agency operations officer who has recently been recommended for the Nobel Peace Prize.