US President Donald Trump is known to reference policies and actions of his predecessor Barack Obama’s administration while patting himself on the back, but there is one particular topic 45 may not want to make into a numbers game during his rallies: drone strikes in undeclared war zones. 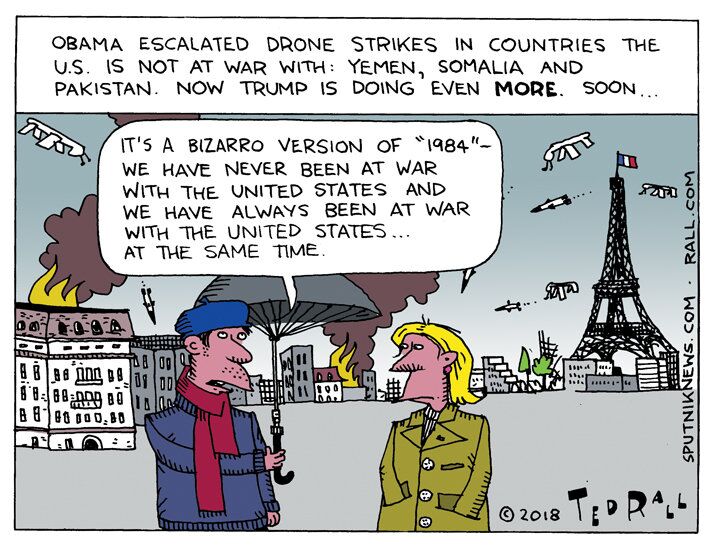 According to the Bureau of Investigative Journalism, Obama surpassed George W. Bush's 57 drone attacks in the undeclared battlefields of Yemen, Pakistan and Somalia with a whopping 563 strikes by his 2017 exit from the White House. Trump, with only two years under his belt, has ordered 238, more than half the total carried out in Obama's eight years in office.

The Trump administration's UAV trigger finger, however, came about following the standards set through the Presidential Policy Guidance — introduced in 2013 under Obama. Taking the procedure's framework, it was quickly reworked by the Trump administration to change "near certainty" of the target's presence to an even more vague "reasonable certainty" as the requirement for drone deployment.

Trump is quick to let the American people know the world is "laughing at us," but retired US Navy commander Lead Bolger tells Sputnik the administration's UAV strikes over recent years, especially in regions within Pakistan, are "creating more enemies" and "fostering hatred at the United States" — referencing a 2012 Pew poll that found nearly 3 in 4 Pakistanis viewed the US as an enemy. One would imagine a 500 percent increase in strikes during the transfer between the Obama and Trump administration did not reduce that reported sentiment.