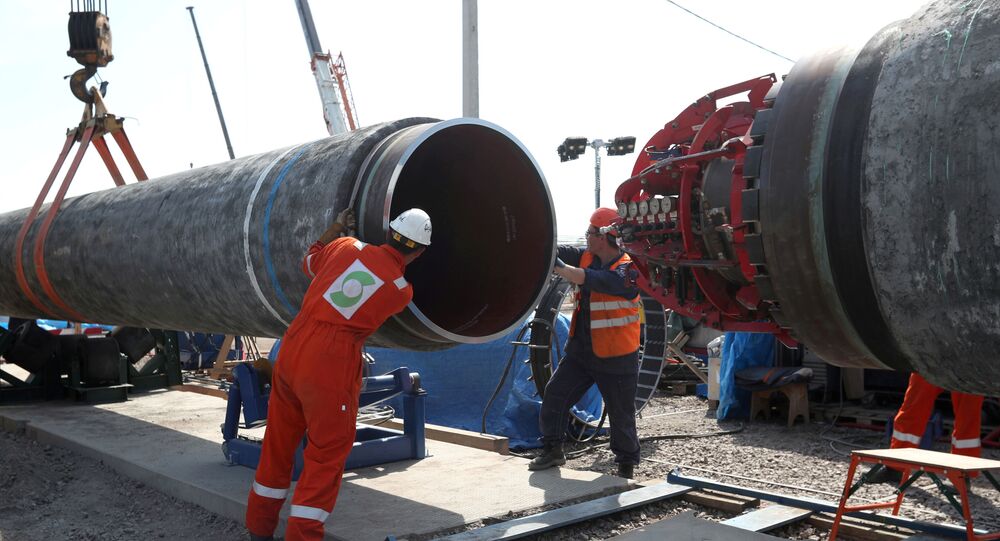 The United States has already slapped two rounds of sanctions on Nord Stream 2 with the so-called Protecting Europe's Energy Security Act rolled into the National Defence Authorisation Act of 2019, and more restrictions passed on 1 January 2021.

A group of US House Foreign Affairs Committee members has called on Secretary of State Anthony Blinken to impose new sanctions on the Nord Stream 2 gas pipeline project.

In a letter to Blinken released on Monday, the Republican lawmakers expressed deep concern that the Biden administration's "strong statements in opposition to the pipeline are not being matched by equally strong actions".

They also voiced alarm about the White House's unwillingness to implement "plans for the mandatory Nord Stream 2 sanctions" required under current US legislation.

The congressmen added that they wanted clarity "on why numerous entities reportedly engaged in sanctionable activity related to the Russian [sic] malign Nord Stream 2 pipeline project have yet to be sanctioned".

This comes a few days after a 40-member-strong group of Republican senators sent President Joe Biden a letter asking him to slap additional sanctions on Nord Stream 2, claiming the project violates US laws and warning that time was running out to stop the pipeline's construction.

"The failure of the administration to identify and impose new sanctions signals its willingness to allow President Putin to gain a stranglehold over Europe's gas supplies and increase [Russia's] geopolitical leverage", the letter reads.

The document was signed by an array of senior GOP members of the Senate, including Tom Cotton, Marco Rubio, Lindsey Graham, Susan Collins, and Mitt Romney.

The US has already imposed two rounds of sanctions on Nord Stream 2, including the so-called Protecting Europe's Energy Security Act, which prompted AllSeas, a Switzerland-based construction contractor, to pull out of the project, citing the threat of "crushing and potentially fatal" sanctions against it.

This led to a freeze in construction with less than 150 km of the 1,230-km project left to complete as Russia sent ships to the Baltic Sea to finish the work. The latter has resumed after a short break in February.

© Photo : Nord Stream 2
Pipes are loaded onto a vessel in the northern German port of Mukran for transshipment to a storage yard

The project is being financed by the Russian energy giant Gazprom, Germany's Uniper and Wintershall, France's Engie, Austria's OMV and the UK-Dutch concern Royal Dutch Shell.

Once completed, the pipeline will be able to pump up an additional 55 billion cubic metres of gas per year from Russia to Germany via the bottom of the Baltic Sea, doubling the capacity of the existing Nord Stream network.

© Sputnik / Alexey Vitvitsky
'Ongoing Exchange' With US on Nord Stream 2 Acknowledged as Berlin in 'Balancing Act' With Ally
Germany has repeatedly rejected the prospect of new extraterritorial sanctions against the project, calling US efforts in this direction an "encroachment on European sovereignty", and warning that it is closely coordinating the issue with its European Union partners.

Moscow, in turn, views the US sanctions against the project as an example of unfair competition meant to boost American liquefied natural gas (LNG) exports to Europe. Russia has repeatedly warned against politicising what it touts as a purely economic project.