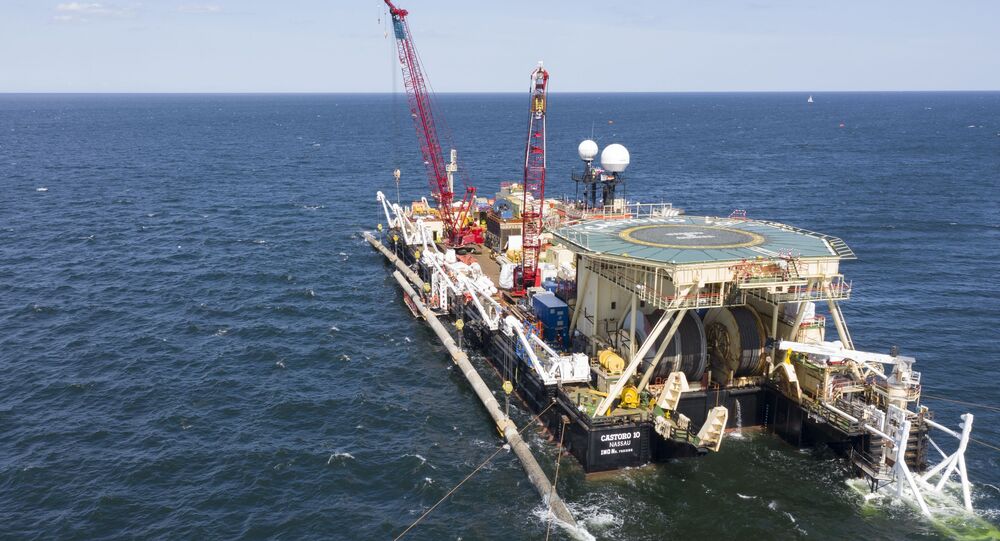 MOSCOW (Sputnik) - As the United States continues to ramp up its sanctions against the Nord Stream 2 gas pipeline, German lawmakers said that Washington is attacking the project to further its economic agenda.

The US Treasury on Monday added Russia’s Fortuna pipe-laying vessel and its owner KVT-RUS to yet another sanction regime intended to prevent the completion of the Nord Stream 2 gas-exporting route. On the same day, State Department spokesperson Ned Price said that the US continued reviewing entities that might be involved in sanctionable activity related to the construction of Nord Stream 2, saying that it was concerned that the pipeline would serve as leverage against the country's European allies.

On Tuesday, Russian Foreign Ministry spokeswoman Maria Zakharova blasted the US State Department for its negative attitude toward the project, recalling that Germany itself says that it will benefit from the pipeline.

"The State Department has admitted that the US is undermining the basic principles of free trade and competition, by subordinating the laws of market to its own geopolitical interests, acting against the will of sovereign countries and the interests of the sovereign states' citizens," Zakharova wrote on Facebook.

Her sentiments have been echoed by German lawmakers.

"For now only Fortuna and KVT-RUS were mentioned ... The US is playing an unfair game, acting against free competition and posing as a colonial ruler. That must be resolutely opposed," Steffen Kotre, a member of the German lower house and energy spokesman for the Alternative for Germany party (AfD), said.

Kotre's fellow party member from the foreign committee, Waldemar Herdt, agrees that the US is pursuing its own economic interests, related to its export of liquefied natural gas, while also trying to undermine the relations between Moscow and Berlin.

"Neither is in the German interest. Germany finds it difficult to withstand this American pressure, which is ultimately a testament to political obsession. This political debate is primarily about the question of German and European sovereignty and freedom of political choice," the lawmaker stated.

Will US Convince Germany to See Things Its Way?

So far, Germany has been walking a thin line, trying to both appease its main geopolitical partner, as well as keep the pipeline construction going. However, with Washington continuing to apply pressure and some German politicians, including Norbert Rottgen, who chairs Bundestag foreign affairs committee, proposing to include Nord Stream 2 in a European response to the incident with Russian opposition figure Alexey Navalny, the idea that the US could persuade Berlin to sanction the pipeline becomes somewhat less far-fetched.

"Not especially for Nord Stream 2. But the US has already incited Germany to sanction Russia. Thus, the damage is enormous already," Kotre thinks.

Meanwhile, Herdt claimed Washington was not interested in persuading, only in pressuring others to promote its economic interest.

"This is anything but a friendly and partnership-based relationship on an equal footing. The US is exclusively pursuing its own interests. This has been the creed of US politics for the past few decades," the lawmaker complained.

Hansjorg Muller, a member of Bundestag's economic affairs and energy committee from the AfD, mentioned that while even the ruling coalition lawmakers were angry with the US pressure, several officials used the Navalny situation as an excuse to stop the project.

"Suddenly, an opportunity arose to some German government figures to double back and chicken-out of NS2 [Nord Stream 2] in the form of the 'Navalny poisoning justification' ... It really looks like a lame and cheap scheme," Muller said, adding that while the government, including Chancellor Angela Merkel, want to see the pipeline finished, "they can't tell the German public that Germany is not as [geopolitically] independent as most Germans think."

While Berlin is stuck between the rock and hard place, Washington does not show any signs of abating, meaning that the German government has to make a decision on how to approach the situation.

"The pressure from the USA will continue to increase if we do not make it clear to our transatlantic partner that we do not need any forced consultations on questions of energy security ... We have no choice but to keep an eye on our own energy security and Nord Stream 2 has a vital role to play in this," Herdt said.

Kotre is also in favour of standing up to US partners on that matter.

"Any further steps taken by the USA must not be allowed to hinder the completion of the last few kilometres. The pipeline is almost complete. It would be insane to let it rot on the ocean floor now. If the US government really thinks the pipeline is a 'bad deal', then that is the problem for the Germans and the Europeans, not the US," the lawmaker fired away.