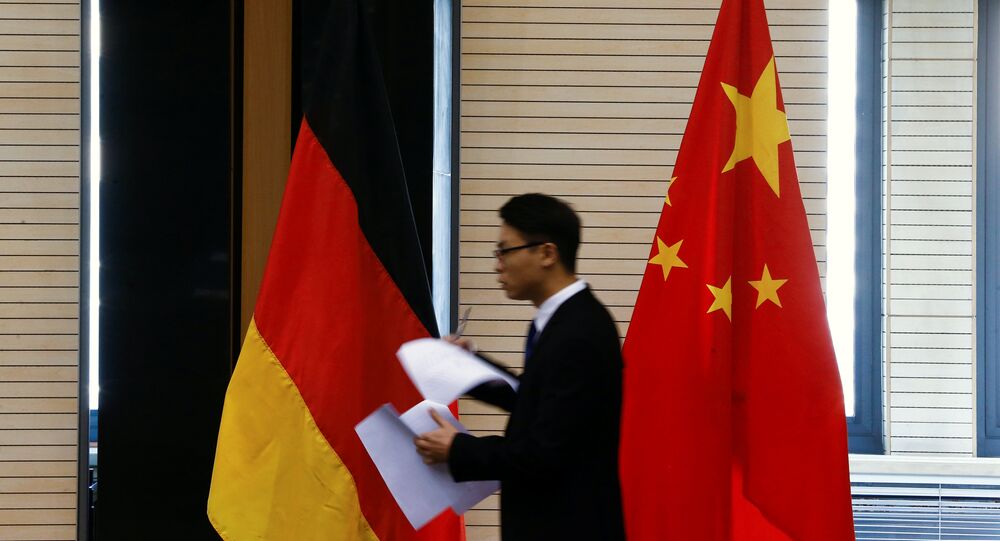 Many German Businesses Prefer China to US, Report Reveals

The corporate client director of Germany’s second-largest bank, Michael Reuther, has branded the results of a recently released study on small and medium businesses “amazing”. He noted that just a few years ago one could hardly imagine that German entrepreneurs would trust China more than the US.

Commerzbank's recent study of German small and medium enterprises (SME) has revealed that the country’s businesses are concerned over planning security and a slowdown in economic activity, the German outlet Der Tagesspiegel reports.

In an interview with the German newspaper, the bank’s Corporate Client Director Michael Reuther explained that 52 percent of German companies still rely on foreign countries, although the proportion of non-exporting companies planning to enter other countries’ markets had slightly dropped since the 2013 survey. According to him, while smaller firms are looking more closely at the EU, which is considered to be safer and more reliable, larger companies are focusing on new foreign markets and emerging countries.

The top manager pointed at the difficulties in both the European and global markets. On the one hand, he noted that the uncertainty caused by Brexit is “very big” and that none of the studied firms had invested in the UK after the referendum. On the other hand, he added that the production capacities abroad are no longer well-loaded, while the geopolitical uncertainties, namely the US sanctions policy towards Iran, as well as difficulties with Turkey and Russia impact the willingness to invest and unnerve German businesses.

The trade conflict between the US and China is another unsettling issue, according to him. He said that the US is “still interesting” for investment rather than just exporting. But China is preferred to the United States and Great Britain for reliability, the banker indicated.

“This is an amazing change. Thirty percent of companies rated the conditions in China as good, but only 17 percent gave the same reference to the US. That would have been unthinkable a few years ago”, he concluded.

Washington and Beijing have been mired in a trade dispute since Trump imposed 25 percent tariffs on up to $50 billion worth of Chinese goods in June 2018 in order to fix what he described as "unfair trade practices". Since then, both sides have implemented several rounds of quid pro quo measures.

Although recent months have been marked by preparations for trade negotiations between Beijing and Washington, tensions flared up in May when the US Trade Representative's office revealed a list of additional Chinese products worth $300 billion that would be targeted by increased penalties. China, in turn, warned that it would introduce tariffs on $60 billion worth of American goods in retaliation for higher US taxation (from 10 percent to 25 percent) on Chinese products.