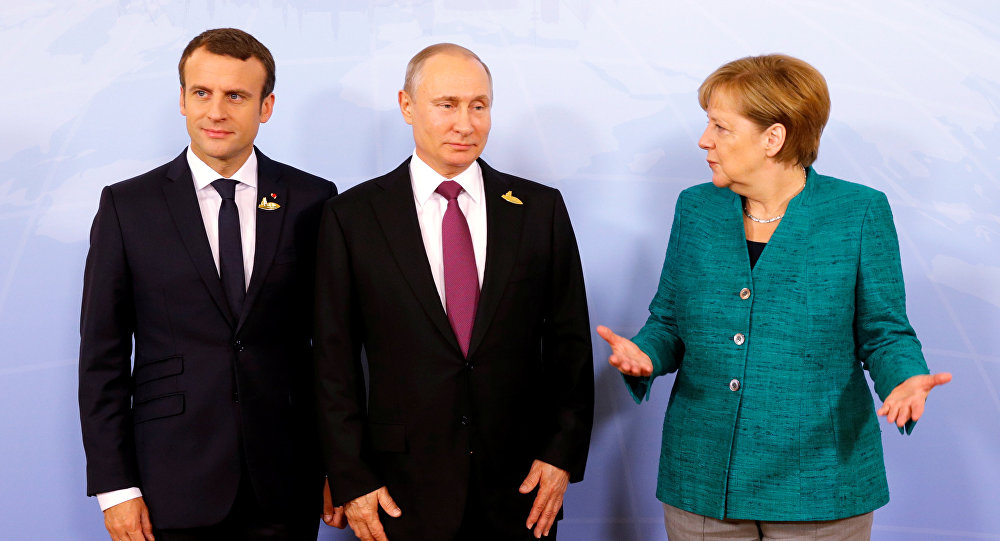 "During the discussion of the situation around the Joint Comprehensive Plan of Action on the Iranian nuclear program, the importance of preserving this agreement, which is a key factor in maintaining international stability and security, was noted. Russia, France and Germany reaffirmed their commitment to further mutually beneficial cooperation with Iran in trade and economy," the statement said.

© AP Photo / Iranian Presidency Office
Instex Mechanism is Less Effective Than Originally Planned - Lavrov
Other signatories to the Iran nuclear deal, China, France, Germany, Iran, Russia, the United Kingdom and the European Union, have slammed Washington's unilateral withdrawal from the JCPOA stressing that the reinstatement of sanctions threatens not only Iran itself but also countries and companies that stay continue doing business with Tehran.

Having that in mind, these countries agreed that a special mechanism, dubbed the Instrument in Support of Trade Exchanges (INSTEX), would be created to facilitate trade between companies and Iran amid the sanctions by Washington.

The Parliamentary Assembly of the Council of Europe

Another topic which was discussed during the phone conversation was Russia's voting rights at the Parliamentary Assembly of the Council of Europe (PACE).

According to the statement released by the Kremlin, the leaders of Russia, Germany and France have backed restoring voting rights to the Russian delegation to PACE.

"The leaders of the three countries spoke in favour of resolving the crisis in the Council of Europe that was triggered by the unlawful decision to strip the Russian delegation of its key rights at the Parliamentary Assembly… They supported restoring the Russian PACE delegation's rights in full," the statement read.

© Sputnik / Vladimir Fedorenko
Lawyers Concluded PACE Decision on Russia Violates Council of Europe's Charter - Moscow
In April 2014, Russia was stripped of its voting rights in PACE in the wake of the Ukrainian crisis and Crimea's reunification with Russia. Since 2016, the Russian delegation has not renewed its credentials ahead of the assembly's sessions in protest of discrimination it faces within the organization.

In June 2017, Moscow froze part of its Council of Europe contribution meant for Russia's PACE membership for 2018 until its delegation's rights in the organization were completely restored. The international affairs committee of the lower house of the Russian parliament has recommended that Russia does not send its delegation to PACE in 2019.

The situation in Ukraine

The three leaders have discussed the situation in Ukraine.

"Vladimir Putin held a phone conversation with German Chancellor Angela Merkel and French President Emmanuel Macron. [The leaders] discussed the situation around Ukraine's domestic crisis, given the failed policy of the [former President Petro] Poroshenko's administration and the power reshuffle in Kiev. [The parties] expressed a common opinion about lack of alternatives to the 2015 Minsk agreement as a basis for peaceful settlement [of the conflict in Donbas]," the Kremlin said in a statement.

The situation in Syria

The leaders have also discussed the situation in Syria with a focus on the formation of a constitutional committee in the war-torn country.

"[The parties] thoroughly exchanged opinions about the situation in Syria, including… multiple ceasefire violations in Idlib by radical armed groups. The Russian president informed his colleagues about the joint efforts made with Turkey on stabilizing the situation in northwestern Syria, protecting civilians and neutralizing the terror threat… The parties attached special attention to formation and launch of the constitutional committee, given the agreements reached during the Istanbul quadrilateral summit [Russia, Turkey, France, Germany] held in October 2018," the Kremlin said in a statement.

The leaders agreed to continue efforts to settle the Syrian conflict in line with the UN Security Council's resolutions.

Russia, alongside Turkey and Iran, is a guarantor of the ceasefire in Syria. Moscow has also been assisting Damascus by supporting the struggle against terrorist groups, providing humanitarian aid to local residents, and facilitating the return of refugees.