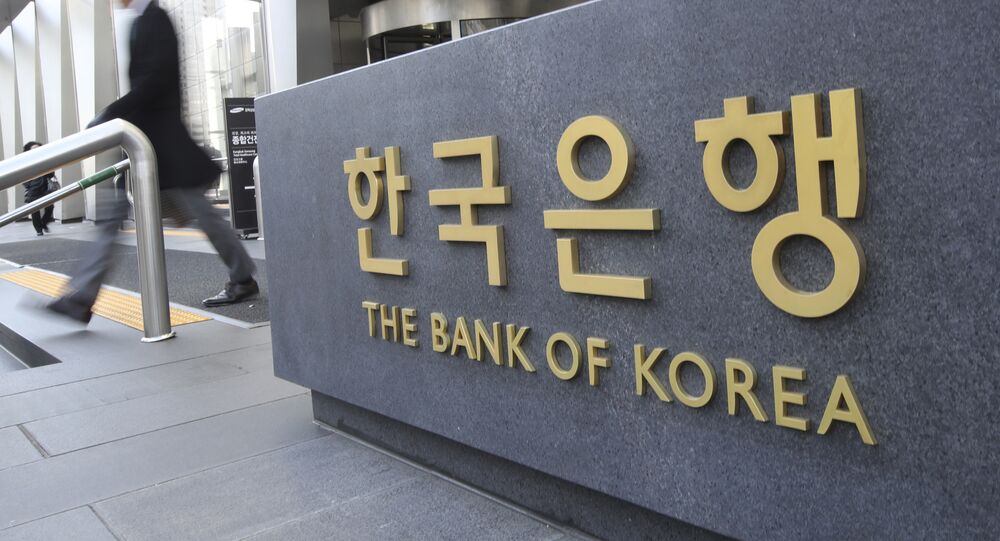 Kristian Rouz — South Korea's central bank is expected to keep interest rates steady, and refrain from any other policy changes at its upcoming board meeting. This comes as the ongoing talks with North Korea, as well as the summit between US President Donald Trump and Chairman Kim Jong-un could produce a breakthrough agreement, reshaping the economic reality on the Korean Peninsula.

In additional to the political and diplomatic considerations, the South Korean economy has been only modestly expanding over the past year. South Korean GDP growth rate stood at 1.1 percent year-on-year in the first quarter of this year, after a 0.2-percent contraction in Q4 of 2017.

These macroeconomic dynamics, coupled with concerns on trade disruptions in the exports-reliant South Korean economy, suggest the Bank of Korea (BOK) should not remove its accommodative policies yet.

"There are plenty of reasons for the BOK to hold this year and the central bank sounds less confident on the economy," Oh Suk-tae of Seoul-based subsidiary of Societe Generale SA, SG Securities, said. "The only reason for a hike would be a widening rate gap with the Federal Reserve, but the BOK has previously said they won't hike just for that."

The BOK base borrowing costs currently stand at 1.5 percent since the latest hike from 1.25 percent back in October 2017. The yet accommodative interest rates render South Korea's national currency, the won, weaker, which is helping the nation's exports amidst foreign trade headwinds.

This is despite the US and South Korea successfully renegotiating the KORUS bilateral trade agreement — which has become less beneficial for Seoul.

The BOK might still raise its interest rates at a subsequent policy meeting in July — particularly so if the vote of BOK policymakers is not unanimous at the upcoming May meeting.

"Onshore economic uncertainties like high unemployment have heightened and the bank should still monitor whether inflation could start to pick up, which means it will have to hold rates for May," Lee Sur-bee of Samsung Securities said.

Indeed, BOK policymakers have been increasingly concerned about the weaker labor market dynamics this year, which they see as a greater challenge than international headwinds — according to the minutes from the April policy meeting.

Some board members have also expressed concern the BOK's policies are becoming increasingly accommodative in the face of ongoing tightening overseas, most prominently, in the US and UK. However, the South Korean economy has not benefitted from the loose monetary conditions, as suggested by the tepid gains in employment.

"It may sound paradoxical but the BOK will have to increase rates in July as the South Korean economy would only become worse going forward, making it even harder to raise rates," Kang Seung-won of NH Investment & Securities said.

© AP Photo / Jermaine Ralliford/US Navy
Seoul Refutes Reports About Offer to US on Removal of Nukes From North Korea
If US President Trump and North Korean Chairman Kim reach a comprehensive agreement, which enables economic cooperation, the South Korean economy could extract significant benefits by capitalizing on the new opportunities up north. The framework of a possible economic cooperation could somewhat resemble joint ventures from the past — such as the Kaesong economic zone.

South Korean enterprises could invest in manufacturing facilities in the North, extracting additional profits from the cheaper North Korean workforce and lower factory input costs north of the DMZ, meaning a greater return on investment (ROI) in the South Korean corporate sector.

This, in turn, would drive inflation at home, and create additional white-collar jobs in management and finance, which could improve the overall economic situation in the South, allowing the BOK to continue raising its interest rates.

If, however, such an economic agreement is not achieved South Korea will have to expand its fiscal stimulus aimed at job-creation. The parliament in Seoul recently passed a bill to spend $3.55 billion to combat youth unemployment.

"The government's proposed extra budget bill has recently been approved, but it will need time to actually have any influence. An additional rate hike after July is unlikely, even in the first half of next year," Yoon Yeo-sam of Meritz Securities.

Yoon only expects one BOK rate increase this year, saying the nation's economy could gain momentum on a sudden pickup in exports.

If the BOK leaves rates unchanged this week, and the US Federal Reserve hikes its rates to 2 percent in June, the interest rate gap between the two economies would widen to 0.5 percent, possibly triggering a capital flight from South Korea.

On the other hand, that same interest rate gap would weaken the won against the dollar, spurring South Korean exports — which would promote more rapid GDP growth, and allow the BOK to possibly narrow the gap by mid-year.