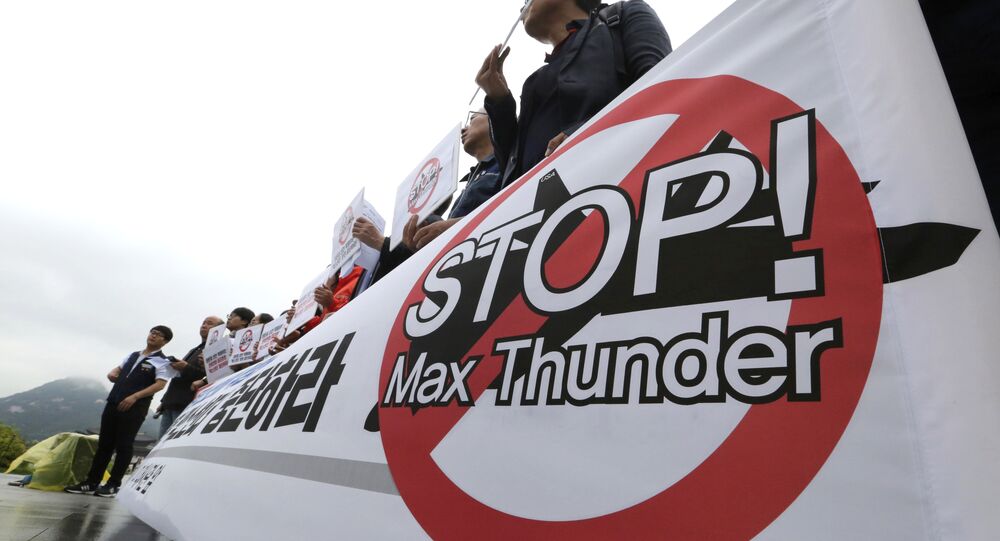 Citing joint military drills being carried out by South Korea and the US, North Korea on Tuesday released a statement threatening to cancel its June talks with the US if provocations continue.

The statement released by North Korean state media KCNA said the ongoing Max Thunder military drill targets North Korea and as such "is a flagrant challenge to the Panmunjom Declaration and an intentional military provocation running counter to the positive political development on the Korean Peninsula."

"The United States will also have to undertake careful deliberations about the fate of the planned North Korea-US summit in light of this provocative military ruckus jointly conducted with the South Korean authorities," it added.

​Speaking to Radio Sputnik's Loud & Clear, Christine Hong, associate professor of Critical Race and Ethnic Studies at the University of California Santa Cruz and a member of the Korea Policy Institute, said that North Korea's decision to suspend its talks with South Korea and perhaps reconsider rapprochement with the US wasn't exactly a surprise.

"I'm prepared for surprises all the way down this road, and so I would just say that North Korea is being portrayed as North Korea being erratic; in fact, this is North Korea being consistent," Hong told show hosts Brian Becker and John Kiriakou. "In the Panmunjom, in the much-celebrated declaration between the two leaders of the Koreas, they agreed as a basic foundational principle that both North and South Korea… agree to cease all hostile acts against each other in every domain, including land, air and sea."

"These war games, Max Thunder, completely violate the spirit of this and North Korea is simply being consistent and stating that… the United States is presenting these very provocative war exercises as business as usual," she said, before adding "there has to be some kind of good faith gesture on the part of the United States and some kind of fortitude on the part of South Korea in actually making the process of this peace tangible."

Fellow guest Hyun Lee, a member of the Solidarity Committee for Democracy and Peace in Korea, noted that the US has wasted no time in violating the Panmunjom Declaration by conducting the exercises.

"It's been less than a month since the declaration was signed and they decide to carry out this exercise that's a two week exercise… involves 100 warplanes, including eight F-22 fighters and B-52 bombers that are designed to drop nuclear bombs," Lee said. " North Korea has taken major steps to ensure a successful summit between [US President Donald] Trump and [North Korean leader] Kim [Jong Un] — they released three US citizens, they're getting ready to dismantle their nuclear test site in Punggye-ri — and Washington pundits and US corporate media, they're always quick to say the North Korea should not be trusted."

"It's completely disingenuous to talk about peace on the one hand while you're carrying out nuclear strike exercises at the same time," she stressed.

Remarking on US National Security Adviser John Bolton's comment that the US should follow a "Libya model" to denuclearize North Korea, Lee said that "was akin to a death threat to the man who you're about to have a summit with," considering that Libyan leader Muammar Gaddafi was executed by US-allied rebels several years after giving up his country's nuclear ambitions.

In Lee's opinion, the US should simply release a statement indicating that exercises would continue, but that aircraft such as the B-52 bombers would be removed.

"North Korea's ‘threat' to pull out of the summit is, in effect, a wake-up call basically saying ‘you can't talk about peace while you're continuing your usual maximum pressure business,'" Lee, also a writer for ZoomInKorea.org, said.

For Hong, the real question is whether or not Trump is the right person to get involved in peace talks with North Korea.

"The question that we have right now is whether or not someone like Trump, who seems to have an ego investment in the prospect of some sort of peace that he can brand with his name… is it possible that this person… is truly able to negotiate peace," Hong asked. "Is the United States actually capable of imagining what's necessary for peace?"