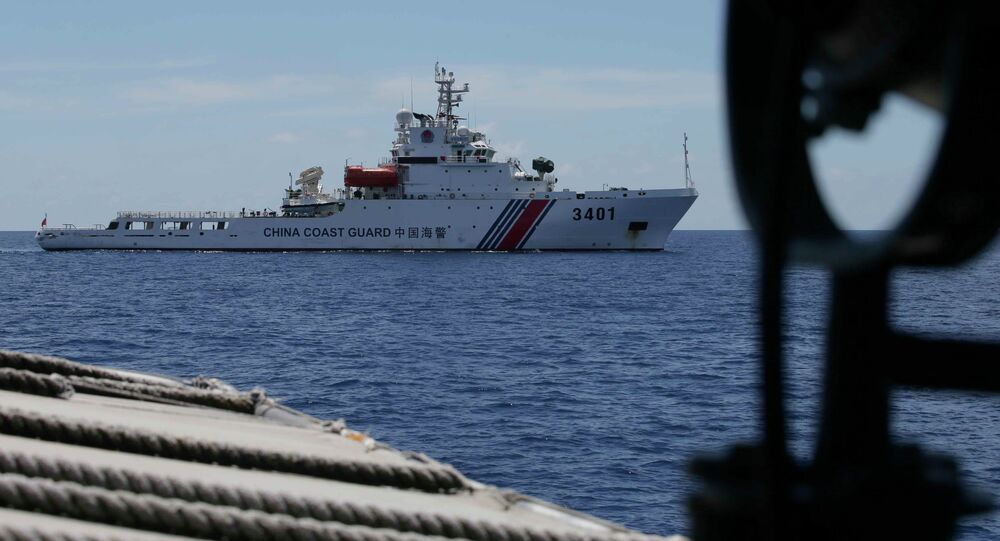 On Sunday, a US carrier strike group led by the USS Theodore Roosevelt entered the South China Sea for “routine operations.” Earlier, Japan issued a rebuke of China’s claims in the strategic body of water. The Pentagon reciprocated by promising to protect the Senkakus – the East China Sea islands controlled by Tokyo but also claimed by Beijing.

The National People’s Congress Standing Committee – China’s top legislative body, has given the Coast Guard the authority to use “any means necessary,” including firing on foreign ships, to protect areas where China claims jurisdiction, the South China Morning Post has reported, citing the text of the document.

Chinese Foreign Ministry Spokeswoman Hua Chunying said that the law is in line with international practices, adding that Beijing “will remain committed to upholding peace and stability in the sea.”

Beijing claims control of wide swathes of the South China Sea – a strategic maritime area that serves as a key passage for international shipping and is a major source of untapped fishing and hydrocarbon resources. Parts of the body of water are also claimed by Vietnam, Malaysia, Brunei, the Philippines and Taiwan. The US, which is not a claimant in the dispute, began carrying out "freedom of navigation" missions in the region in the early 2010s, after then-Secretary of State Hillary Clinton branded the body of water a "matter of US national interest." Beijing has repeatedly criticised US "meddling" in the region, and demanded that the region’s nations be allowed to sort out the dispute independently.

China’s Coast Guard and ships from the People’s Liberation Army Navy (PLAN) have already been involved in multiple incidents with foreign vessels in the South China Sea, including the alleged ramming and sinking of a Vietnamese fishing boat last April, and instances in which Chinese ships have chased US vessels out of the area. With some countries, the conflict has spanned decades, with Beijing and Hanoi fighting a major skirmish in the Spratly Islands which killed 64 Vietnamese troops and injured one Chinese soldier in 1988.

China’s Coast Guard came into existence in 2013, and became a branch of the military in 2018. Its ships are mostly lightly armed, usually carrying twin 14.5 mm machine guns as their primary armament. The Coast Guard fleet does include more heavily-armed ships, however, including at least one cutter known as the CCG 3901, which sports a pair of 76 mm rapid-fire naval guns.

The law’s passage comes amid a major escalation of tensions between China on one side and the US and its Taiwanese and Japanese allies on the other just days into Joe Biden’s term as president. Earlier this week, Japan’s permanent mission to the UN issued a rare diplomatic note dismissing China’s claims to part of the South China Sea and suggesting they were not in accordance with the UN Convention on the Law of the Sea, to which both countries are parties.

© Wikipedia / Aquatiger127
Taiwan's Defence Ministry: 8 Chinese Bombers, 4 Fighters Have Breached Island's Air Defence ID Zone
On Saturday, the Taiwanese military reported that Chinese bombers, fighters and an anti-submarine warfare turboprop aircraft had breached its air defence identification zone south of the island, with some 380 similar "incursions" reported in 2020. China does not recognise the legitimacy of Taiwan’s air defence identification zone, and considers the island nation itself a wayward province that should one day be reunited with the mainland.

Also Saturday, newly appointed US Secretary of Defence Lloyd Austin spoke to Japanese Defence Minister Nobuo Kishi by telephone and promised that the US would help Tokyo defend the Senkaku Islands, an archipelago of uninhabited islets and rocks situated in the East China Sea between mainland China and Japan’s Ryukyu Islands. China calls the archipelago the Diaoyu Islands, and began demanding that they be returned to the PRC in the 1970s, pointing out that they had been seized by Japan during a war with the Qing Dynasty in 1895. Tokyo claims Beijing’s claim is connected to the fact that the archipelago may be rich with hydrocarbon resources.

On Sunday, US Indo-Pacific Command announced that a Navy carrier strike group led by the USS Theodore Roosevelt had entered the South China Sea a day earlier “to conduct routine operations,” including missions “to ensure freedom of the seas,” building security partnerships and the “foster[ing] of maritime security.”

US China Relations; Instacart Fires Back; Climate Change Under Biden