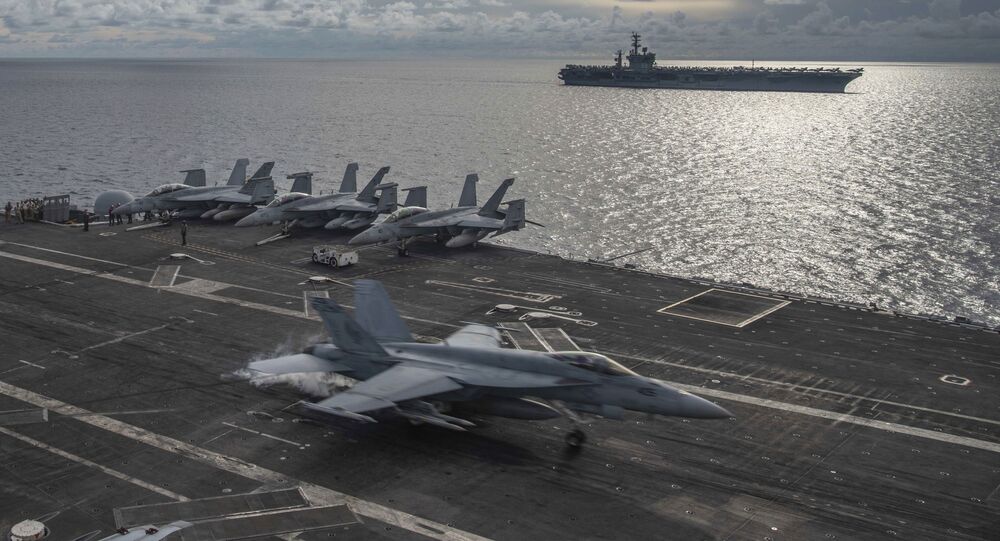 The US Navy began carrying out ‘freedom of navigation’ missions in the South China in the early 2010s, after then-Secretary of State Hillary Clinton classified the strategic body of water a matter of ‘US national interest’. The Trump administration has ramped up US naval drills in the region, and announced plans to deploy new missiles to the area.

The United States is the main actor driving the militarization of the South China Sea, and has undermined efforts by countries to resolve disputes at the regional level, Chinese Foreign Minister Wang Yi has said.

“Peace and stability is China’s greatest strategic interest in the South China Sea. It is also the common strategic aspiration of China and ASEAN countries,” Wang said, speaking by video link to ministers of the Asian Association of Southeast Asian Nations on Wednesday, his comments published on the foreign ministry’s website.

Accusing the United States of intervening in regional territorial and maritime disputes, “constantly flaunting its force” and strengthening its military deployment, Wang suggested that US actions “interfere” with China and ASEAN nations’ efforts to resolve disputes through negotiation.

“The South China Sea is not a geopolitical arena, let alone a boxing ring for big powers,” the diplomat stressed.

Wang emphasized that China remains ready to have a dialogue with the United States to achieve cooperation, and urged Washington to “fully respect the wishes and expectations of countries in the region, instead of just creating tension and seeking personal gain from it.”

China lays claims to about nine-tenths of the South China Sea, a strategic hydrocarbon and fishing resources-rich body of water which also handles in excess of $3 trillion in trade per year. Other countries, including Vietnam, Malaysia, Brunei, the Philippines and Taiwan have made their own claims to parts of the Sea closer to their own shores, leading to disputes with Beijing.

© Wikipedia / Voice of America
Map showing countries' claims in the South China Sea.
Top81
China's New AWACS Ready for South China Sea Missions, Military Says
China and ASEAN began negotiating a ‘code of conduct’ for the region in 2002, but little progress has been made since the early 2010s amid US efforts to forge bilateral alliances with regional powers and engage in ‘freedom of navigation’ missions throughout the area.

This summer, the United States deployed three of its 12 carrier strike groups in the Pacific, sending two of them to the South China Sea for several rounds of drills. China responded by beefing up its deployment of ‘carrier-killing’ missiles in the area, and deploying its own warships.

Late last month, Beijing warned of possible “military accidents” due to “provocative” US behaviour after a US warship allegedly violated Chinese maritime borders in the Paracel Islands, a disputed archipelago claimed by both China and Vietnam. The US denied any wrongdoing, saying its warship was carrying out a “routine” “freedom of navigation” mission “in the vicinity” of the disputed area.