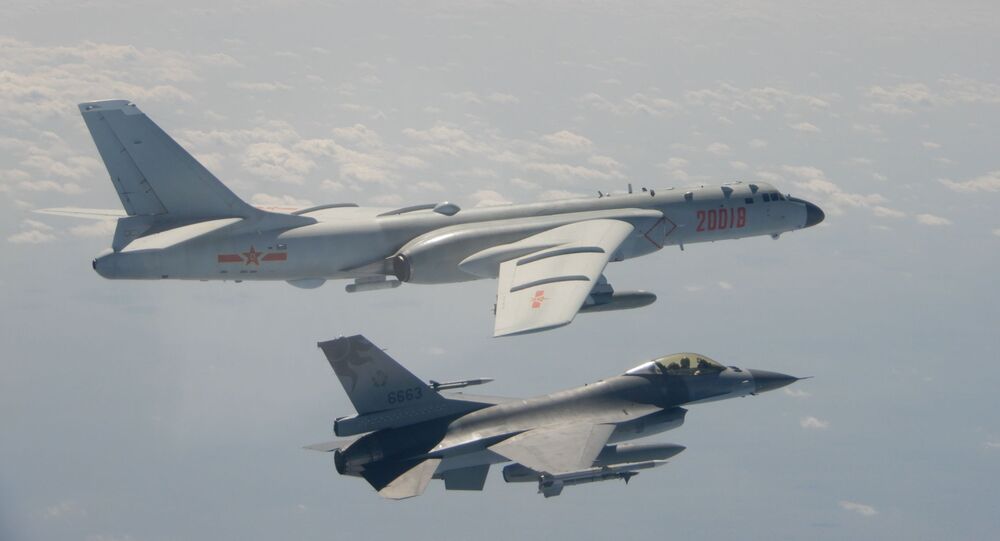 Following a pair of airspace incursions on Sunday and Monday, Taiwan’s primary liaison with Beijing has protested the maneuvers as “provocative,” saying they endanger the region’s peace and welfare.

On Monday, F-16 fighters from the Republic of China Air Force intercepted several Chinese People’s Liberation Army Air Force (PLAAF) H-6 bombers that briefly crossed into Taiwanese airspace. The incident occurred in the Bashi Channel, a waterway that forms part of the Luzon Strait separating Taiwan and the Philippines.

It was the second such incident in as many days, following a much larger incursion as part of an “island encirclement” drill by Chinese jets.

“Our air force scrambled fighter jets to shadow, intercept and disperse the communist warplanes through radio broadcasting,” Taiwan’s Ministry of National Defense said on Monday, according to the South China Morning Post. “The military has full surveillance and control of the communist long-haul training activities and the public can rest assured of our capability to uphold security or our national territory.”

On Sunday, a much larger flight featuring the PLAAF’s H-6 bombers as well as J-11 fighter jets and KJ-500 early warning aircraft, which flew a half-circle around the island, first through the Bashi Channel in the south, and then back through the Miyako Strait, which separates Japan’s Okinawa Island from the Southern Ryukyu chain.

A pair of J-11B and J-11BS that escorted the H-6 around Taiwan yesterday.

​Taiwan’s Mainland Affairs Council, the autonomous island’s primary liaison with Beijing, called the maneuvers “provocative,” noting, “It was not a wise move at a time like this,” according to the Taipei Times. “Various provocative acts have seriously damaged the status quo of the Taiwan Strait and have increased regional tensions.”

Taiwanese Foreign Minister Joseph Wu added in a Monday tweet that “H-6 bombers are useless against Coronavirus,” which has killed 900 and infected some 40,000 people since December 2019, mostly in China’s Hubei Province.

Ma Xiaoguang, a spokesman for Beijing’s Taiwan Affairs Office, fired back that Taiwanese President Tsai Ing Wen’s government should avoid “playing with fire” by “trying to use its strengthening ties with the US to plot independence,” which he called “a sheer provocation.” Tsai’s January re-election was interpreted by Beijing as a victory for her pro-independence movement, which has doubled down on its informal relationship with Washington. Taipei finalized the purchase of advanced F-16V “Viper” fighters late last year, Sputnik reported, and has sought modern battle tanks and other advanced equipment.

Chinese military aircraft conducted drills over the Mayako Strait and the Bashi Strait, near to #Taiwan and #Okinawa. #China #SouthEastAsia@IntellFusion pic.twitter.com/wkdAg6Uv5t

​The flights follow the return of Taiwanese Vice President William Lai, who has infuriating Beijing by describing himself as a "realistic worker for Taiwan independence,” from a visit to Washington, where he met with US President Donald Trump and several pro-Taiwanese US lawmakers, Taiwan News reported.

"Lai is a pretty radioactive figure for Beijing as he is seen as a [stalking horse] for independence within Tsai’s circle," Dr. Shelley Rigger, a political science professor focusing on Taiwan and China at Davidson College in North Carolina, told the Singapore-based Straits-Times last week.

"Beijing will react strongly, so there’s a lot of risks for Taiwan and Tsai in a (possible) meeting between Lai and Trump."

The governments in Beijing and Taipei each claim to be the sole legitimate representative of all of China. The republican government, which dates to 1912, only survived the Chinese Civil War by retreating to Taiwan, which the communist Red Army was unable to conquer. The communists established the People’s Republic in 1949, and since then have won recognition by most countries and international bodies as the legitimate Chinese government. Beijing has promised war if Taiwan declares independence - something increasingly likely with Tsai’s reelection.

US Sees Taiwan as ‘Pressure Point’ Against China, but Citizens Prefer Status Quo