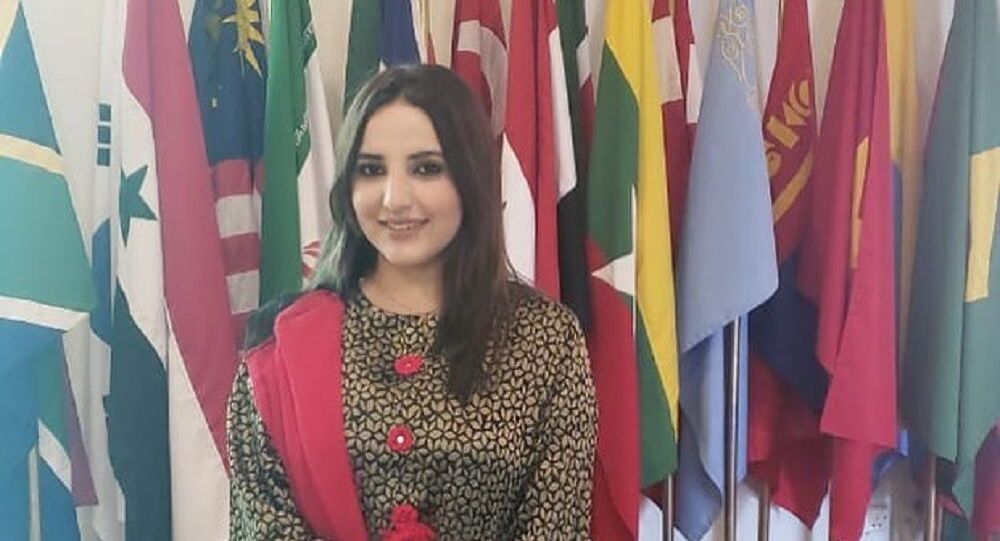 New Delhi (Sputnik): Hareem Shah, who shot to infamy after her stint of occupying Pakistan Prime Minister Imran Khan’s chair, has continued to hog the attention of the people and media ever since her alleged exposés of various prominent people in the country.

Pakistani social media star Hareem Shah has thousands of followers on her Tik Tok profile, where she shares her videos dancing and mouthing popular songs.

Shah has several accounts credited to her name on Twitter where she has shared videos and stirred up controversies. And given her multiple accounts, she slyly gets away with the the scandals.

The social media celebrity, who has now decided to leave Pakistan and move to Canada, became a national concern after rumours surfaced of her alleged warning to Prime Minister Khan.

In a tweet, a picture of Khan with his hands folded in prayer was shared. Its caption was rather seen as a warning to Imran Khan which read: "pray to God that Hareem’s mobile phone breaks, else he would be ashamed".

The Tiktoker has kept a number of prominent personalities in Pakistan on a knife edge by exposing sensational chats, videos, pictures, and audio clips she claims to be of influential political and sports personalities.

The elaborate list, per her, involves Pakistan’s Railway Minister Sheikh Rasheed, Information Minister Fayaz ul Chouhan, and Cricketer Shaheen Afridi amongst others. They, however, haven't confirmed her allegations.

While some are worried that she might become the next Qandeel Baloch, a Pakistani model who was killed by her own brother following similar controversies, others think she has become a national concern after rumours surfaced of her alleged threat to the Pakistani prime minister. Her critics also warned her of a fate similar to Rabi Peerzada, whose nude pictures and videos were leaked online after her political controversies.

Qandeel Baloch, an actress and model had quite a lot of similar controversies associated with her name. Baloch became a popular social media celebrity with her explicit videos for which she was criticised and her involvement with politicians. She was murdered, reportedly, by her own brother.

“Tiktoker Hareem Shah and her friend Sandal Khattak are warning the release of videos of celebrities' acts in several videos. This shows that they are in grave danger and they're not afraid as their fate may not be the same as that of Qandeel Baloch", Raham Khan, a Pakistani journalist said.

Video clips of alleged calls to the railway minister were shared from Shah’s Twitter account, with the purported conversation showing that the two had established affable relations. While Shah claims that the videos are genuine and said they were released by her friend, Rasheed hasn't commented on the leak.

The woman, who is said to be Shah, can be heard saying in the video: “I have never publicised any of your secrets, why don’t you talk to me. You used to get naked in front of me and indulge in wrong things”. Following her remarks, a man, who is believed to be Rasheed, abruptly disconnected the call.

In another video clip, the alleged railway minister can be seen explaining to Shah that is he is upset with her because she was uploading videos with other men.

Shah also claimed to have leaked audio from a call with Punjab's Information Minister Fayaz ul Chouhan, in which a man can be heard convincing Shah to not expose him in the mainstream media. He hasn't commented on the allegations.