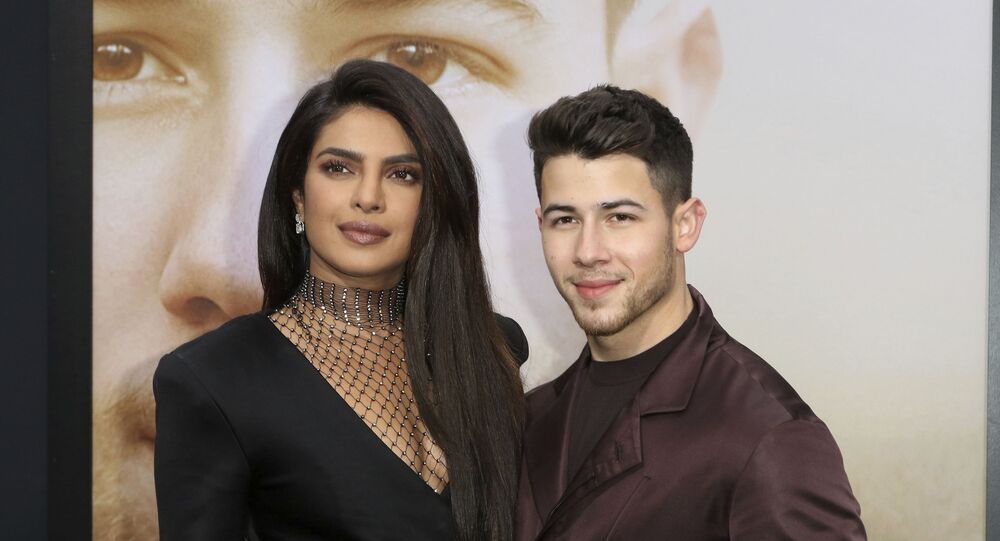 New Delhi (Sputnik): Indian-American actress Priyanka Chopra Jonas left her fans fawning by photoshopping herself into a picture of her husband Nick Jonas as he stood awkwardly alone at a music event after winning the Best Pop Video award for the song “Sucker”.

Bollywood actress Priyanka Chopra missed out on attending the 2019 MTV Video Music Awards with the Jonas family on Tuesday. But Nick attended the event with his siblings Joe and Kevin, along with their spouses Sophie Turner and Danielle Jonas, respectively.

Being a stag, Nick found himself in an awkward situation when the awards for Best Pop Video were announced, after which Joe and Kevin celebrated by kissing their respective spouses while Nick hung at the centre of the stage as a loner, sparking meme content for social media users.

To rescue Nick from the trolling, PeeCee, as Priyanka is popularly called, inserted herself into the picture, in which she can be seen hugging Nick.

"I’m always with you Nick Jonas. Congratulations Jonas brothers! I’m so proud of all of you! 'Sucker'", she wrote on the Instagram post.

I’m always with you @nickjonas 😜😍Congratulations @jonasbrothers! I’m so proud of all of you! #sucker

Priyanka’s adorable gesture towards her husband has yet again left people lauding her as a perfect partner.

​Priyanka is currently busy shooting for her Hollywood Netflix action-adventure film "We Can Be Heroes"; however, she often takes breaks from shoots to spend some time with Nick, who is also swamped with his ongoing music tour, which will continue until February 2020.