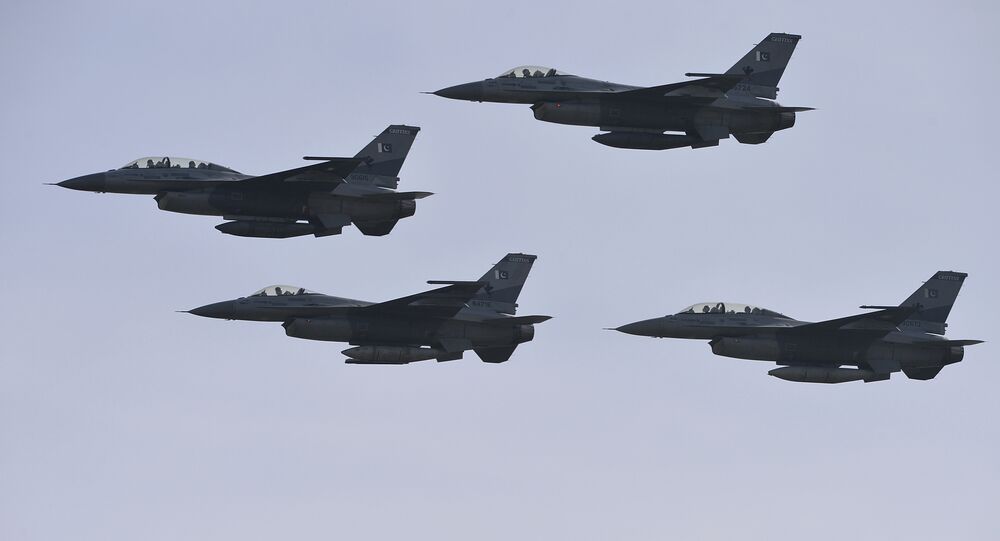 Pakistan on Monday issued a warning to India not to undertake any misadventure in view of the upcoming national elections in the country. India had earlier asserted that it is maintaining an optimal level of military preparedness to tackle any eventuality.

New Delhi (Sputnik): Even as the international community makes diplomatic efforts to facilitate a de-escalation of tensions between India and Pakistan that began in mid-February, Pakistan has deployed an entire F-16 fighter jet squadron along the Indian border, says a report in the newspaper the Hindustan Times quoting an unnamed Indian defence official.

Pakistani authorities have yet to comment on the Indian media report.

The fact that the Pakistani government has not opened up the air space along Indian border that was shut down after India's air strike in February, is seen to be an indication that the Pakistan Air Force (PAF) is on full operational alert. Besides, the Rawalpindi-headquartered 10 Corps along with a Special Forces brigade from Sialkot of the Pakistan Army have been deployed along the Line of Control (LoC) in Jammu and Kashmir.

"We have confirmed reports that PAF's F-16 acquired from both US and Jordan are on high alert all along India-Pak border-from Hyderabad in Sindh to Skardu in Northern Areas. The Pak Army deployment including radars and air defence system along the LoC was strengthened immediately after the February 14 Pulwama attack as they expected Indian retaliation similar to that of the surgical strike", said one official to the Hindustan Times.

Pakistan has been denying that PAF had used its F-16 fighters against India during recent air clashes. On Sunday, Pakistan's foreign ministry once again reiterated that Indian authorities had made a false and baseless claim that an Indian aircraft had shot down a Pakistani F-16.

The Indian Air Force conducted an air-strike on an alleged Jaish-e-Mohammed terrorist camp in Balakot located inside Pakistan and termed it as a strike against "non-civilian and non-military targets with clear intent not to cause any damage to life or infrastructure".

Over the last 15 days, shelling and firing with heavy arms have been ongoing from the two sides.

India and Pakistan have stopped regular Director General of Military Operations level (DGMO-level) talks, a mechanism where two military officers talk to each other over the phone to defuse tense situations on the border.

© AFP 2020 / FAROOQ NAEEM
China Calls Islamabad 'Iron Brother' Amid India-Pakistan Confrontation
Statements issued by the US, UAE, Saudi Arabia, and China have indicated that the situation is still not conducive to stability between the two nuclear-armed neighbours.

"A series of incidents have transpired between Indian and Pakistan recently, which as we see is not conducive to peace and stability in South Asia. Like I said before, China has been mediating between the two sides, engaged in dialogues and working very hard to promote talks, ease tensions, and improve their relations. In our exchanges of views on the regional situation, the security issue features in our discussion with Indian and Pakistan. We have had extensive and in-depth talks with both sides", Lu Kang, China's foreign ministry spokesperson said on Monday.

Pakistan on Monday once again cautioned India against any misadventure, which it insinuates that the Indian side may want to undertake keeping in mind the forthcoming elections. The country's Foreign Minister Shah Mahmood Qureshi had a telephone conversation about the cross-border situation with US National Security Advisor John Bolton along with the US ambassador to Islamabad.

"Bolton appreciated Pakistan's measures, which helped lower the tension and urged continued restraint on both sides. The need for dialogue between Pakistan and India to find a peaceful resolution to all outstanding disputes was also emphasised. The Foreign Minister cautioned against any Indian misadventure, keeping in view the forthcoming elections. Ambassador Bolton concurred", a statement issued by the Pakistani foreign ministry regarding the phone call read.

The backdrop of the current India-Pakistan cross-border hostilities is the February 14 Pulwama terror attack that was claimed by Pakistan-based Jaish-e-Mohammad (JeM) and killed 40 Indian paramilitary troops. India after a week had conducted a pre-emptive air strike against purported JeM terror camps at Balakot in Pakistan which infuriated its nuclear-armed neighbour leading to retaliation via a counterstrike in Indian terrioty.