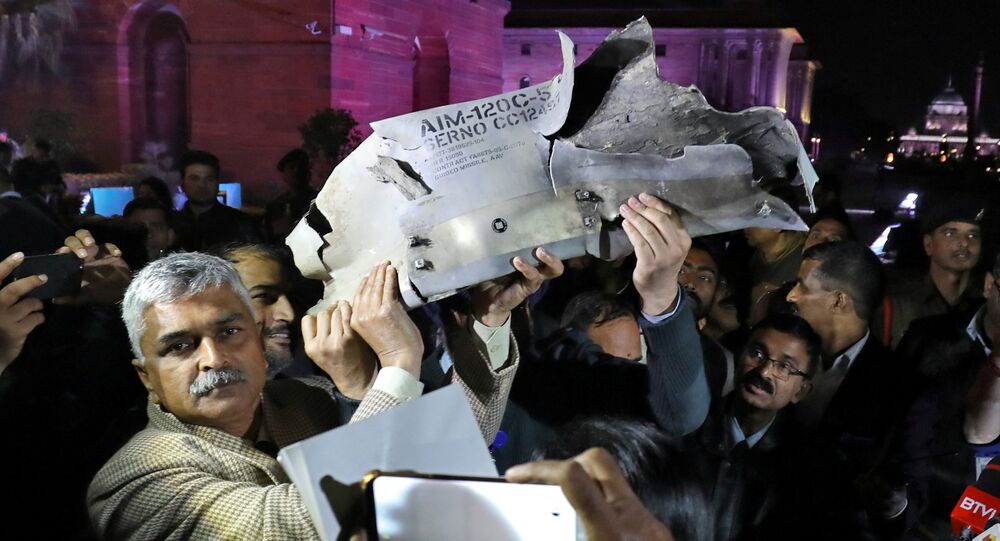 Pakistan has consistenly rejected accusations by New Delhi that it had violated an F-16 sale agreement with the United States, having allegedly deployed US-made fighter jets to shoot down an Indian warplane last month.

India has called on the United States to launch an investigation into Pakistan's alleged use of American-built F-16 fighter jets during a dogfight in late February that led to an escalation of tensions between the two nuclear weapons-wielding neighbours.

"Evidence of the use of Amraam Missile, which can only be deployed on the F-16 with Pakistan, has also been shown to the media. We have asked the United States to also examine whether the use of F-16 against India is in accordance with the terms and conditions of sale", Indian Foreign Ministry spokesperson Raveesh Kumar told reporters at a Saturday briefing.

Kumar also stated that Islamabad should explain the reason for its continued denial of dispatching F-16s and the loss of an aircraft, claiming that there were eyewitnesses and electronic evidence.

According to The Times of India, New Delhi made a reference to the testimony to the US Congress by American officials in which they committed to maintaining a "very enhanced end-use monitoring programme" of Pakistan's F-16s.

"We will have a US presence to monitor compliance with the security plan requirements, a very enhanced end-use monitoring programme", said John Hillen, then-US assistant secretary of state for political-military affairs, in June 2016.

Hillen also promised a "two-man rule, so to speak, for access to this equipment and restricted areas, and F-16 flights outside of Pakistan or participation in exercises and operations with third nations must be approved in advance by the United States government".

© AFP 2021 / STR
Pakistan Not Aware of Any Deal Barring Use of F-16 Jets Against India - Def Min
The Times of India reported that such assurances suggest that Washington can easily determine whether Pakistan used the F-16s during air combat with India and confirm whether India's MiG-21 Bison actually shot down one of the US-made fighter jets.

Pakistani Defence Minister Pervez Khattak said earlier this week that he was not aware of whether the F-16 purchase agreement with the United States contained a provision prohibiting Islambad to use the US-made fighter jets against New Delhi.

Speaking at a media briefing on Tuesday, Robert Palladino, deputy spokesperson at the US Department of State, confirmed that Washington was following the issue "very closely":

"I can't confirm anything, but as a matter of policy, we don't publicly comment on the contents of bilateral agreements that we have in this regard involving US defence technologies nor the communications that we have with other countries about that".

Under the deal with the United States, Pakistan is believed to only be entitled to use the US-built fighter jets for counterterrorism operations, but India has accused Islamabad of violating the agreement and downing an Indian warplane during an aerial fight over the Line of Control in Kashmir in late February.

© Sputnik / Iliya Pitalev
China Asks India & Pakistan to Move On, Strive for Lasting Peace - Reports
The Indian side also displayed parts of an AMRAAM medium-range missile that was recovered in the Indian-administered part of Kashmir, alleging that they had been launched by a US-made jet. Pakistan has vehemently denied losing any F-16s or scrambling them in the first place.

Historically tense relations between India and Pakistan have been simmering since Pakistan-based terrorist group Jaish-e Mohammad claimed responsibility for a suicide attack on a convoy with Indian security forces on 14 February that killed over 40 soldiers. In the wake of the attack, New Delhi accused Islamabad of harbouring terrorists — a claim vehemently rejected by Pakistan as "unsubstantiated".

On 26 February, the Indian Air Force conducted an air raid against an alleged Jaish-e Mohammad training camp in Pakistan-administered Kashmir, reportedly destroying a number of facilities.

The following day, Islamabad announced it had shot down two Indian warplanes over the Kashmir border and captured an Indian pilot, who was released two days later in a "peace gesture".