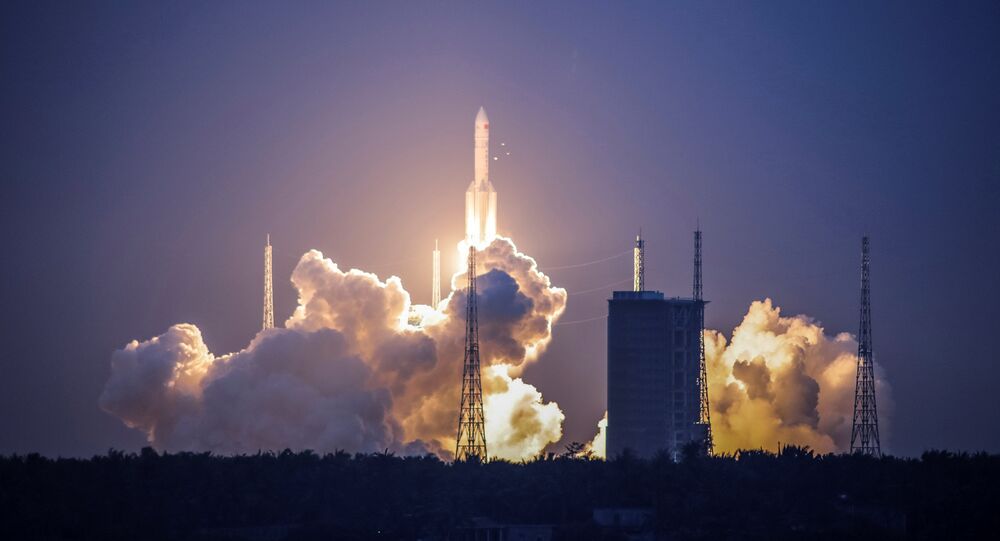 The Chinese Communist Party’s official newspaper laid the blame for the growing trade war with the US on American insecurity about the rise of Chinese economic power. Meanwhile, US officials are making it increasingly clear that the country’s new Space Force is aimed primarily at curbing Chinese competition.

"No matter what China does, in the eyes of the United States, China's development has already ‘damaged the supremacy of the US,'" said an editorial in the People's Daily on Friday, the official newspaper of the ruling Communist Party of China. It noted that the US considers China "an unprecedented opponent."

"To tackle such an ‘opponent,' the US must adopt two methods," the article said. "[F]irst is to use the opponent for motivation and to drum up mass political support for ‘making America great again,' and the second is to contain the opponent's supremacy at every level."

Earlier this week, the US added a 25 percent tariff to another $16 billion in Chinese goods, Sputnik reported. On Wednesday, China responded in kind with import duties on an equal amount of American goods.

On Thursday, US Vice President Mike Pence spoke to reporters at the Pentagon about the establishment of the country's sixth branch of its military, the "Space Force," announced by US President Donald Trump earlier this year. Pence identified the new force's primary goal as addressing the "highly provocative demonstration of China's growing capability to militarize space."

Further, in a report to the Congressional Defense Committees released Thursday, the Pentagon noted that the US was in danger of losing its edge in space to rising powers, warning that "those potential adversaries are now actively developing ways to deny our use of space in a crisis."

"China and Russia, our strategic competitors, are explicitly pursuing space warfighting capabilities to neutralize US space capabilities during a time of conflict," the report stated. It also noted specifically that the development of anti-satellite laser weapons by China and Russia is a major motivating factor behind the creation of the Space Force.

Here it should be noted that the US, Russia and China are all signatories to a host of UN-directed treaties governing international conduct in space. In 1967, the UN ratified the "Treaty on Principles Governing the Activities of States in the Exploration and Use of Outer Space, including the Moon and Other Celestial Bodies," or simply the "Outer Space Treaty."

The primary points of the nonbinding treaty are that space is free for all nations to explore and sovereign claims cannot be made, space activities must be for the benefit of all of humanity, nuclear weapons and other weapons of mass destruction are banned in space, and individual nations are responsible for damage caused by their own space objects.

The three nations are also part of the UN Committee on the Peaceful Uses of Outer Space (COPUOUS), formed in 1958 following the Soviet Union's launching of Sputnik, the first artificial satellite, to manage human space exploration. It's responsible for the Outer Space Treaty as well as a host of other agreements designed to keep outer space peaceful, cooperative and universal.

Further to that point, China and Russia have repeatedly introduced draft treaties on banning all weapons in outer space. In 2014, the US rejected the draft Treaty on Prevention of the Placement of Weapons in Outer Space and of the Threat or Use of Force Against Outer Space Objects (PPWT) on the grounds that it was "fundamentally flawed" for not covering ground-based weapons, Space News reported at the time.

It might be objected, though, that ground weapons are the real danger at present. Pence's warning Thursday about Chinese threats referred to a 2007 test of an anti-satellite missile, which successfully destroyed a Chinese satellite in low-Earth orbit (LEO). In his Thursday speech he further suggested the Chinese were not far from being able to shoot down geosynchronous satellites, too, and that Russia was reviving Soviet-era weapons programs with similar capabilities.

© AP Photo / Yang Baosen/Xinhua
Why Neither US Tariffs, Nor Sanctions Can Stop China's Bullet Trains

However, the US also has these capabilities, as it demonstrated in 2008 when it blasted a satellite 133 miles up with an SM-3 missile, Business Insider noted.

Pence's suggestion somewhat ignores the enormity of the gap between low-Earth and geosynchronous orbits, though. Low-Earth orbit objects are anywhere between 100 and 1,200 miles above the Earth's surface, where they can quickly pass around the planet. However, geosynchronous satellites, like those used by GPS and related navigation systems, are an astonishing 22,200 miles out, a distance necessary to keep them in the same place relative to the Earth's surface (far) below.

Pence noted that with the US military's increasingly heavy dependence on satellites for communications, navigations, intelligence and other services, the Defense Department's inability to protect those assets is a dangerous vulnerability that the Space Force was designed to mitigate. Under Pence's plan, space assets scattered across different agencies and service branches would be gathered under a single command. US Air Force Space Command presently handles much of those from its headquarters in Colorado Springs, Colorado, but it's unclear where the new centralization would be located.

All this is not to say that China's space program is not both ambitious and impressive. The development of its Long March series of rockets, designed to lift heavy satellites and spacecraft into orbit; the deployment of its first space station; and the establishment of the Chinese Lunar Exploration Program have made it a serious contender in space exploration.

The China Aerospace Science and Technology Corporation hopes to launch 35 rockets in 2018, phys.org noted, including several lunar robotic missions. The upcoming Long March 5 rocket, if the corporation can overcome its failed April 2018 launch, is planned to lift the equipment for future module-base space stations and manned missions to Mars, phys.org reported.

Jim Phillips, CEO and chairman of the nanotechnology firm NanoMech, told Breitbart that China's space program is based largely on stolen nanotechnology secrets, which could aid in manufacturing the advanced materials needed for future space missions.

"Make no mistake about it that we are — we are totally at war with China right now," Phillips said July 29. "It's not a war of bombs. It's a war of cyberwarfare, and it's also a war of GDP and jobs. And the one that has the most GDP and the jobs is going to be the clear winner."

To that end, the US' trade war with China is aimed in large part at curbing Chinese industrial strength. Business Insider noted Friday, "The space race of the 1960s proved that countries with the strongest industrial base and manufacturing excel in space."

"America will no longer have a disproportionate financial advantage that gives it the moral, economic and the leadership authority it has now," Phillips said about the US falling behind in advanced industries like nanotech. "When this happens, America loses; the world changes. Everything changes… [China] won't have to use its military."