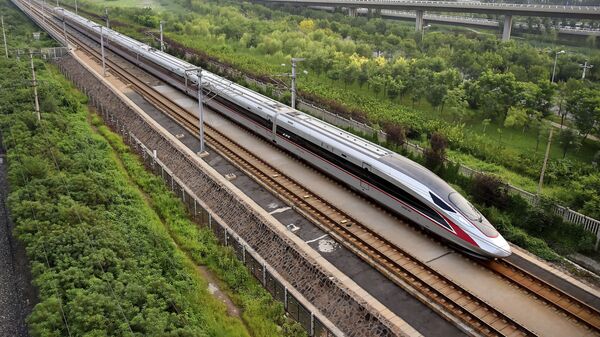 Ekaterina Blinova
All materialsWrite to the author
In August, China has marked the 10th anniversary of its high-speed railway endeavors. Speaking to Sputnik, Tom McGregor, a Beijing-based CCTV commentator and editor, explained how the country's bullet trains are bringing the nation together and facilitating China's economic growth regardless of the US tariff spree.

"China's high-speed railways have played a pivotal role in the nation's development in the past 10 years: China Railway Corporation (CRC) has become one of the world's leaders in introducing major new high-tech advancements in the international railroads sector," said Tom McGregor, a Beijing-based political analyst and senior editor for China's national TV broadcaster CCTV.

On August 1, the People's Republic of China (PRC) marked the 10th anniversary of its high-speed railway project. Ten years ago the 118-km high-speed line between Beijing South and Tianjin became operational paving the way for the new era of China's infrastructural development. By 2017, the country had built a network of 25,000-km-long high-speed rail tracks seeking to hit 38,000 km by 2025.

"Many believe Chinese high-speed trains are now faster and more comfortable than even its main rival — Japanese railways," the Beijing-based analyst opined. "For the Chinese to surpass the Japanese and Germans in rail technology stands as a remarkable achievement and renews a spirit of patriotism for the Chinese people."

Railway Diplomacy: How 'China is Building Routes in All Possible Directions'
The development of domestic railways has had a positive impact on China's economy: "That benefits the Chinese working class as the CRC must hire many workers to build its networks along with train stations," McGregor said. "The train stations can boost the local economies."

The analyst has drawn attention to the fact that "despite China having a population at over 1.4 billion people, many Western regions remain largely under-developed and sparsely populated." Therefore, the high-speed railway network literally brings the country's population together. 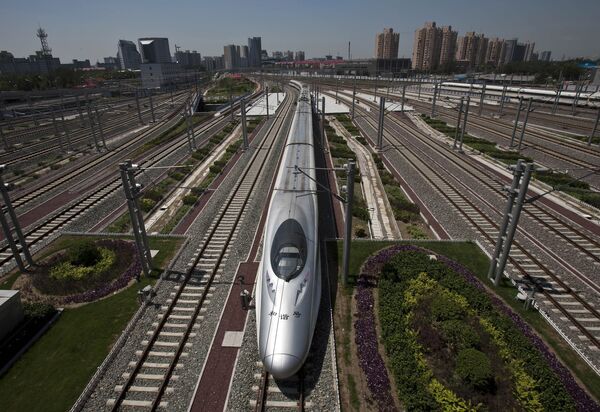 Caught in the Crossfire: Why American LNG May Fall Prey to US-China Trade War
Meanwhile, the Trump administration is stepping up the pressure on Beijing through a second wave of tariffs. From August 23, $50 billion worth of Chinese products will be subjected to a 25 percent tariff. Although this constitutes just 10 percent of all Chinese imports to the US, President Donald Trump signaled that he was ready to impose tariffs on all $500 billion of imported goods from the People's Republic.

The question then arises whether the ongoing trade war and potential sanctions could influence the country's bold railway projects.

According to the CCTV editor, it would sound ridiculous to any Chinese person if they were asked if potential economic sanctions imposed by Washington could derail efforts by the CRC to build a 38,000-km high-speed railway network by 2025.

"Although the Chinese have enjoyed some cooperation with other nations to build railroads, the Chinese had to rely largely on its own citizens and companies to expand the railroads, because foreign technologies and hiring foreign-born experts had proven way too expensive for them," he explained.

McGregor underscored that the China Railway Corporation was "focused on Chinese-made technology upgrades and designers, because they could cut costs in the process and not become prey to foreign governments and foreign companies making unnecessary demands on them." 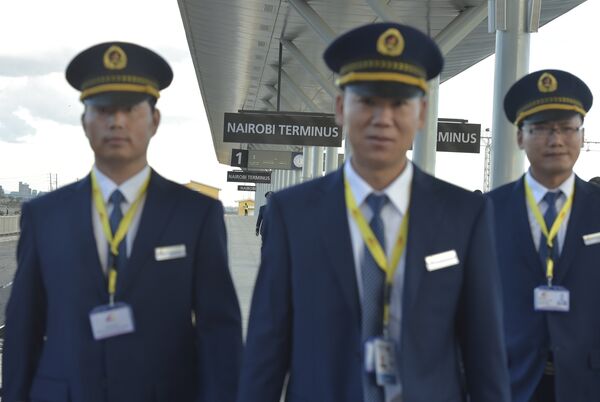 Kenya Railways attendants from China upon arrival from Mombasa in a train launched to operate on the Standard Gauge Railway (SGR) on May 31, 2017 in Nairobi.
© AFP 2022 / SIMON MAINA

China's rail tracks have gone far beyond the country's boundaries: Beijing is exercising so-called "railway diplomacy," building bridges between nations across the globe as part of its ambitious Belt and Road initiative.

Commenting on the issue, McGregor underscored that "it's a winning strategy for China."

"The concept works best in the emerging markets and under-developed countries, since sovereign governments from those countries would face challenges in building high-speed rail networks on their own accord," the analyst explained. "They could sign partnership agreements with the CRC to build new railroads and train stations in their homeland."

According to Xinhua, the People's Republic has helped build over 6,200 kilometers of railways in Africa. This includes the Mombasa-Nairobi standard gauge railway in Kenya, the Ethiopia-Djibouti railway, the Lobito-Luau railway in Angola and the Abuja-Kaduna railway in Nigeria, to name just a few.

As for Latin America, China laid thousands of kilometers of rail tracks in Brazil, Peru and Venezuela.

In Asia, Beijing is mulling over a plan to build a strategic railway line connecting Kerung in Tibet to the Nepalese capital, Kathmandu.

Still, the Beijing-based political analyst expressed doubts regarding China's opportunities to win over its competitors in the European part of Eurasia.

"Can EU member states be trusted to allow Chinese high-speed rail to take charge of the railways in their nations? I doubt it," he presumed. "They would likely demand EU railways companies play a leading role and insist on the CRC in playing a minor role. EU member states are mainly highly-developed and hence they would not suffer serious consequences by halting CRC projects with meddlesome bureaucratic regulations."