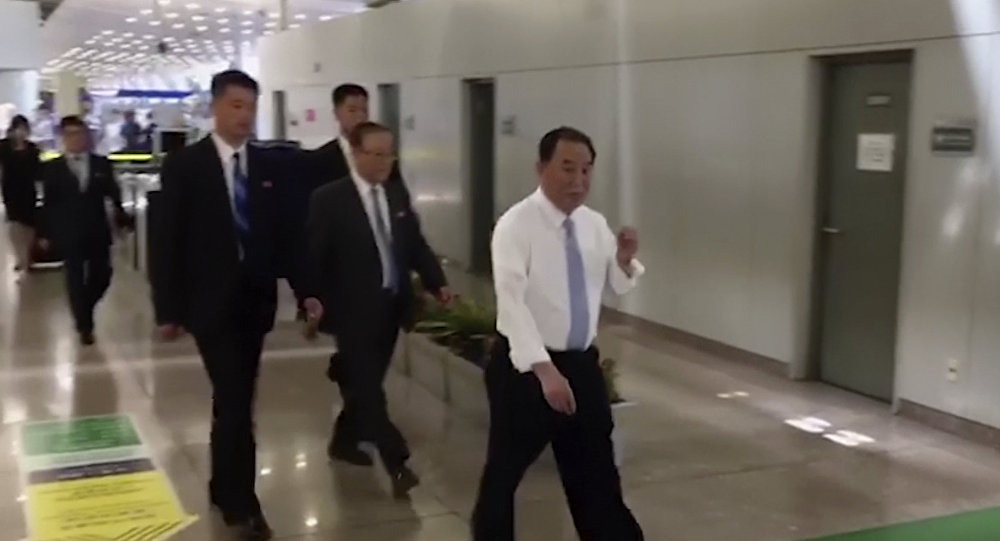 MOSCOW (Sputnik) - Kim Yong Chol, vice chairman of the Central Committee of the North Korean ruling Workers' Party, arrived in Beijing on his way to the United States, where he will negotiate the possible summit between US President Donald Trump and North Korean leader Kim Jong Un, the South Korean Yonhap news agency reported.

The vice chairman landed in Beijing at 10:00 a.m. local time (02:00 GMT), after which he was seen booking a ticket for a flight scheduled to depart for New York at 01:00 p.m. on Wednesday, the South Korean Yonhap news agency reported, citing sources.

"I understand that Vice Chairman Kim Yong-chol has arrived in Beijing, will hold talks with Chinese officials at the airport and leave for the U.S. tomorrow," a source told the media outlet on condition of anonymity.

Donald Trump later addressed the issue on his Twitter account. "We have put a great team together for our talks with North Korea. Meetings are currently taking place concerning Summit, and more. Kim Young Chol, the Vice Chairman of North Korea, heading now to New York. Solid response to my letter, thank you!" Trump wrote.

According to the White House, Secretary of State Pompeo to meet with senior North Korean official Kim Yong Chol in New York this week.

Kim is the North Korean ex-military intelligence chief known for having knowledge and experience on the issues of denuclearization and security.

According to Yonhap, the official's visit was anticipated as a response gesture to the recent trips of US State Secretary Mike Pompeo to North Korea.

© Sputnik / Alexey Agarishev
US Decides to Defer Sanctions Against DPRK as Trump-Kim Summit Back On - Reports
Kim is heading to the United States amid the ongoing working-level consultations between Pyongyang and Washington on the possible bilateral talks on denuclearization of North Korea, initially planned for June 12 in Singapore.

On May 24, Trump said he was pulling out from the summit, citing hostility from North Korea. Shortly afterward, however, the US president said that he was still open to meeting with the North Korean leader.

Pyongyang responded to Trump's announcement by expressing its willingness to meet with the United States and resolve outstanding issues. North Korea suggested that Trump made this decision based on Pyongyang's unwillingness to unilaterally denuclearize.