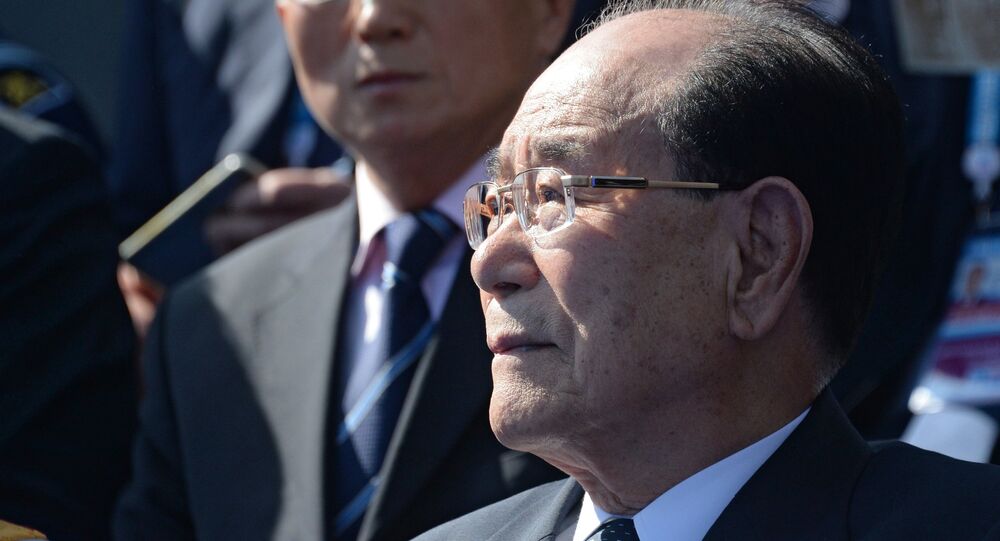 South Korean President Moon Jae-in is expected to meet with North Korea's ceremonial head of state Kim Yong-nam, but it has yet to be decided whether the sides will have a one-on-one meeting, local media reported.

"President Moon will be meeting with Kim, beginning with the Olympic opening ceremony,"  the official of the presidential office Cheong Wa Dae told the agency.

Kim, the president of the Presidium of the Supreme People's Assembly, is set to visit South Korea this week as head of North Korea's high-level delegation to the Winter Olympic Games, set to start on Friday, the Yonhap news agency reported.

"As the host of the Olympic Games, we will warmly and politely welcome Kim and the high-level North Korean delegation and create various opportunities for communication, such as high-level talks between South and North Korean officials," Kim told a briefing as quoted by the Yonhap news agency.

South Korea's presidential office's spokesman added that the visit of Kim Yong-nam to South Korea as leader of a high-level delegation to the Winter Olympic Games shows Pyongyang's determination to improve bilateral relations.

"We believe it reflects North Korea's determination to improve the South Korea-North Korea relationship and make the Olympic Games successful and that the North has shown sincere and earnest efforts toward such an end," South Korean official said at a press briefing.

Moreover, South Korea's Unification Ministry said on Monday that DPRK's art troup would likely travel by a ferry to perform in South Korea for the Winter Olympics under an exemption from sanctions. The 140-member Samjiyon troup will reportedly use a Mangyongbong passenger ship also as an accommodation.

According to Yonhap news agency, the sides are currently discussing details, including a port the ferry will use.

Earlier, Pyongyang has informed Seoul that the 22-member delegation will arrive for a three-day visit to Pyeongchang on Friday, the agency stated, citing officials from South Korea's Unification Ministry.

© AFP 2020 / MENAHEM KAHANA
South Korean Skiers Head for DPRK to Hold Joint Training - Reports (VIDEO)
After a four-party meeting between North, South Korea, the International Olympic Committee and organizing committee of the 2018 Olympics in Lausanne on January 20, the IOC declared that the unified Olympic team of the two Korean states will take part in women's ice hockey under a "unification flag", while athletes from North Korea will compete in figure skating, short track and skiing.

In addition, the two countries’ national teams will march together under a "unification flag" at the Olympics opening ceremony.

The sports issue became a point of rapprochement between the Koreas after North Korean leader's New Year address. In the speech, he voiced the idea to send DPRK's athletes to the Olympics.

Last week, South Korean skiers headed for the North Korean resort town of Masikryong to hold joint training on the threshold of the Winter Games.

The Winter Olympics in Pyeongchang will take place on February 9-25.