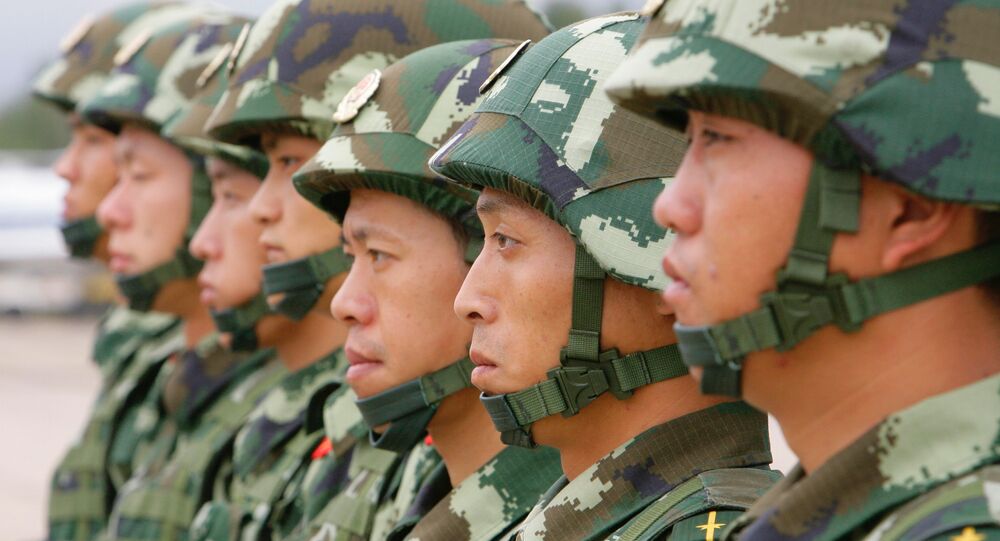 An exhibition celebrating the 90th anniversary of the founding of the People's Liberation Army (PLA) opened in Beijing, presenting a review of the PLA's history and showing China's increasing military prowess through images and models of some of the country's most advanced military equipment.

© AP Photo / Andy Wong
China Seeks to Transform Army as Military Tensions Grow on Korean Peninsula
Organized in chronological order from the Nanchang Uprising on August 1, 1927 — viewed as the beginning of the Communist Party of China (CPC) leading armed strikes against the Kuomintang — to this year, the exhibition is divided into eight parts covering major military events during the past nine decades.

President Xi Jinping and the six other members of the Standing Committee of the Political Bureau of the Communist Party of China Central Committee visited the exhibition at the Military Museum of the Chinese People's Revolution on Friday.

A straw hat belonging to former CPC leader Mao Zedong in Gutian in 1929 and a pistol used by former PLA veteran Zhu De in the Nanchang Uprising and other events are among the most valuable exhibits at the show.

© AP Photo / Zha Chunming/Xinhua
Axis of Rivals: Why NATO is Always So Afraid of Russia-China Military Exercises
Over 1,000 photos and 1,300 historical items are on display at the exhibition, which covers an area of 4,800 square meters.

Some 100 relics were shown to the public for the first time, Huang Yibing, the deputy curator of the museum, told the Xinhua News Agency on Saturday.

Among them were recently collected items, such as the diaries of Zhou Baozhong (1902-64), leader of the Northeast Anti-Japanese United Army (later combined into the PLA), while some were exhibits rarely shown before, such as the marshal uniforms belonging to PLA founding fathers and senior commanders including Marshal Zhu De and Marshal Peng Dehuai.

Modern technology has been applied to make the exhibition more interesting and interactive.

By scanning the QR code beside the exhibits, visitors can instantly get the exhibit's audio introduction on their phone, while major war scenes such as the Battle of Jinzhou, which took place in 1948 between the PLA and the Kuomintang military during the civil war, have been restored with the aid of 3D technology and projection, attracting visitors to explore more.

"It's an exciting show," a Beijing-based visitor surnamed Liu, waiting while her 2-year-old son played inside the war experience zone, told the Global Times on Sunday. "I want my child to learn more about PLA history, so I brought him along."

"I was most impressed by the history of the War of Resistance against Japanese Aggression," a 60-year-old visitor who requested anonymity told the Global Times. "This is a history that none of us should ever forget."

Apart from the precious items, the exhibition also showcases the development process of the PLA's equipment over the decades through models of the aircraft carrier and naval fleet, and real weapons like rifles, pistols, machine guns and grenades.

© REUTERS / KCNA
Korean Knot: Only Russia and China Can Stop Pyongyang's Military Muscle-Flexing
"Ten years ago, the military museum in Beijing also held a large-scale exhibition, but the current exhibition includes many commissioned weapons and equipment and covers all services of the PLA, especially the DF-31A missile which is a strategic weapon," Song Zhongping, a military expert who has served in the PLA Rocket Force, told the Global Times.

"The transparency that the PLA shows through this exhibition is unprecedented, and this reflects the PLA's confidence and the fast development of China's military power. Weapons like the DF-31A and DF-26 missiles and ZTZ-99 tank are not only China's most advanced weapons, but also rank among the top in the world," Song said.

The exhibition will officially open to the public on Thursday.

This article was written by Huang Tingting and Yang Sheng and was first published in the Global Times.