Axis of Rivals: Why NATO is Always So Afraid of Russia-China Military Exercises 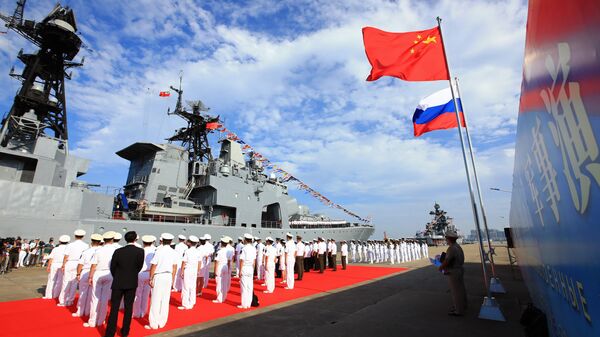 © AP Photo / Zha Chunming/Xinhua
Subscribe
It's no surprise that NATO is seriously concerned that Russia and China plan to conduct joint naval drills, Russian military expert Viktor Baranets told Sputnik. According to him, the alliance is especially alarmed about a possible military alliance between Beijing and Moscow.

The first stage of the drills phase will start at the end of July in the Baltic Sea, and in September the exercises will move to the Sea of Japan and the Sea of Okhotsk.

Polish Defense Minister Antoni Macierewicz specifically focused on what he described as a strategic alliance between Russia and China, which he claimed "is posing a threat to the free world."

"Over the past few years, Russia and China have tried to hide the strategic alliance that unites them; they tried to create an impression that there is no such union. They created a semblance of a bilateral conflict in order to mislead the public opinion of the West and even some of its leaders," Macierewicz said.

He added Russia and China allegedly admitted that "it is necessary to remove the camouflage" and "threaten the free world."

Commenting on all of this in an interview with Sputnik, Russian military expert Viktor Baranets specifically drew attention to the fact that NATO countries are very much afraid of a possible military alliance between Russia and China.

"This is NATO's traditional whining and the voice of Poland is heard most loudly there," Baranets said, adding that "joint Russian-Chinese exercises of any scale always incite, if not panicky, then extremely jealous comments from politicians and generals in NATO countries."

According to him, Tokyo is particularly sensitive to the Russian-Chinese drills in the Pacific Rim region, given the spat between China and Japan over the islands in the South China Sea.

"All this can be explained by the fact that the US, NATO and their allies are terribly afraid of Russia's military alliance with China. Let me remind you that last year, Chinese leader Xi Jinping for the first time mentioned the likelihood of a military alliance between China and Russia, a phrase that shook Washington and NATO headquarters," Baranets said.

He recalled that earlier, Moscow and Beijing "used to talk only about partnership while now, Beijing openly declares that it does not rule out the creation of a Russian-Chinese military alliance."

"This, of course, is a pretext for panic in NATO, although after the G20 summit, the Pentagon said that China had agreed to conduct exercises with the Americans at sea, "Viktor Baranets concluded.

Pentagon Blues: US Worried by China's Growing Military Cooperation With Russia
Last month, Russian political analyst Yevgeny Zaitsev said that the road plan for military cooperation between Russia and China is likely to focus on anti-terror measures within the framework of the Shanghai Cooperation Organization (SCO).

The interview came after Russian Defense Minister Sergei Shoigu presented his Chinese counterpart Chang Wanquan with a road map for the development of bilateral military cooperation over the next three years.