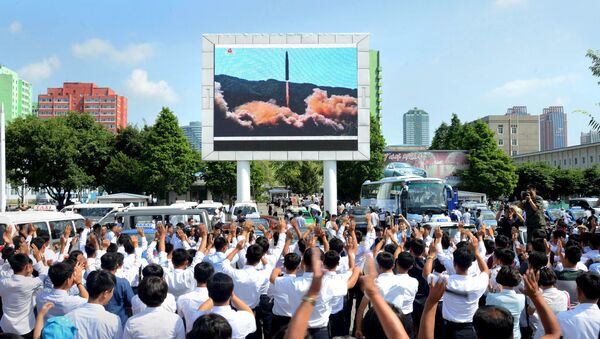 Despite Washington's readiness to use force against Pyongyang, there is still a chance to peacefully resolve the current problems in the Korean Peninsula, Russian political analyst Anatoly Petrenko told Sputnik. According to him, Russia and China could add to the region's security.

Lavrov Says Russia Knows Type of Missile Launched by North Korea
Speaking at an emergency meeting of the UN Security Council on Wednesday, US envoy to the UN Nikki Haley insisted that North Korea's actions were "quickly closing off the possibility of a diplomatic solution," leaving Washington few options except military force.

The Security Council's emergency session was called after Pyongyang announced on Tuesday that it had successfully launched its first intercontinental ballistic missile.

Questions about North Korea's missile test you were afraid to askhttps://t.co/bwMjUxVrp5

While the United States demanded that the Security Council ramp up pressure on North Korea, veto-wielding members Russia and China warned against any further escalation.

Russia's Deputy Ambassador to the United Nations Vladimir Safronkov said that Moscow shares the concerns of the international community over North Korea's nuclear and missile programs, but cautioned that the military option should be taken off the table.

"The possibility of taking military measures to resolve the problems of the Korean Peninsula should be excluded," Safronkov said.

In an interview with Sputnik, Russian political analyst Anatoly Petrenko predicted that the United States will continue its saber-rattling against Pyongyang.

"US President Trump is now facing a dilemma. On the one hand, he understands that unleashing hostilities in the Korean Peninsula is the first step towards a world war. On the other hand, those forces that are in favor of demonstrating US power are interested in increasing tensions in the region," Petrenko said.

He supposed that Washington's "saber-rattling" will continue for some time, but that the Americans will not take any concrete military actions.

"Now moving the center of military operations from one region of the world to another takes just a matter of several hours, or even minutes, if we are talking about missiles. And many in the US know it perfectly well, Petrenko said.

In his opinion, there is still a chance that Washington and Pyongyang, which "flexed the muscles" of their capabilities, will finally realize the necessity of sitting at the table to resolve the problems pertaining to the Korean Peninsula.

Petrenko pointed to Washington's "irreconcilable drive to dominate everywhere and flex its military muscles," something that he said the White House will continue to do.

"Importantly, even South Korea is already calling for a diplomatic solution to the problem, while Pyongyang is still heeding China's stance on the matter. China and Russia are North Korea's long-term partners, which is why there is also a chance that Pyongyang will show less resolve related to its military muscle-flexing in the future," Petrenko concluded.

US 'Needs to Learn Lessons of Pearl Harbor' After North Korea Missile Launch
North Korea said that it had successfully launched an intercontinental missile (ICBM) that traveled 580 miles and reached an altitude of 1,740 miles during its 39-minute flight before "accurately hitting the target waters in the open sea" in the Sea of Japan.

However, the Russian Defense Ministry said that its warning system showed that the Hwasong-14 only reached a maximum altitude of 332 miles and flew just 316 miles. That flight distance and altitude correspond to the characteristics of a medium-range ballistic missile, not an ICBM, the ministry has said.