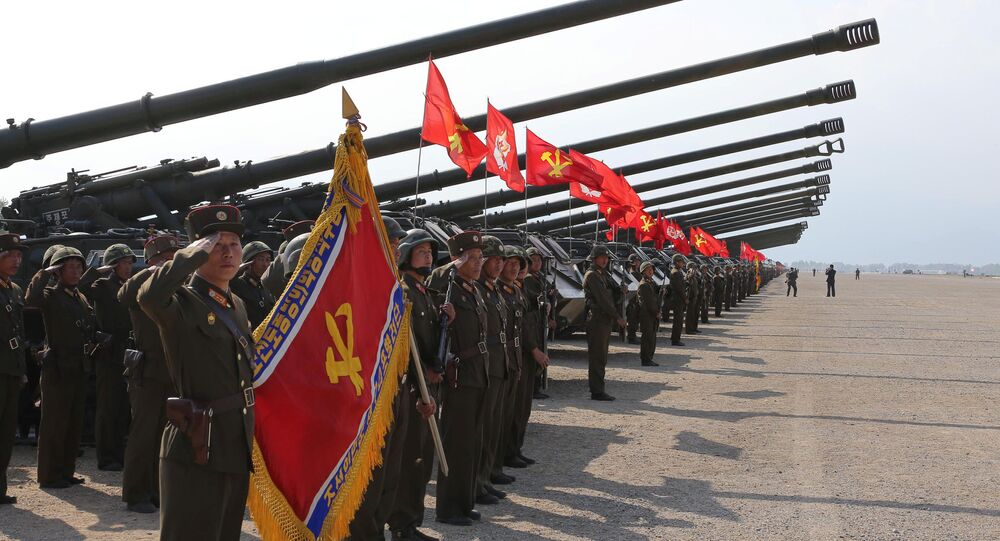 The tough rhetoric of US President Donald Trump regarding North Korea's ballistic missile and nuclear program risks escalating the situation to the point where Pyongyang carries out a pre-emptive strike, Professor of Political Science Andrew O'Neil warned in conversation with Radio Sputnik.

On Thursday, US President Donald Trump said that a "major conflict" with North Korea is possible amid increasing tension in the Korean Peninsula.

"There is a chance that we could end up having a major, major conflict with North Korea. Absolutely," Trump told the Reuters news agency.

Andrew O'Neil, Dean and Professor of Political Science in the Griffith Business School at Australia-based Griffith University, pointed out that Trump's lack of political experience and tendency to "think out loud" can sometimes result in very open statements.

"We're seeing him learning, slowly but surely, how intrinsically difficult it to frame a consistent policy approach towards North Korea," O'Neil said.

"I think the real risk in all of this is not so much premeditated use of force, I think the risk is that both leaders will find themselves in a situation where they are perhaps a little too confident in their own ability to manage a crisis situation."

"I think the risk for the Trump administration is that the President's rhetoric leaves him with very few options. So, if the North Koreans do undertake a missile or nuclear test or another form of military provocation on the peninsula, President Trump will come under tremendous pressure to do something, to act in a very tangible way beyond UN Security Council resolutions."

"At that point, there is a risk that he will perhaps take what he sees to be some low-level military action against the North Koreans but which will be perceived in Pyongyang as the opening phase of a full-scale military strike by the US."

© AP Photo / Ng Han Guan, File
US Saber-Rattling Over North Korea Aims to Cripple China's Global Economic Plans
O'Neil said he is "quite pessimistic" about the prospects for resolving the current crisis between the US and North Korea because the two sides have taken largely irreconcilable positions.

"The North Koreans have made it clear on many occasions that they are fully committed and willing to fight a war in relation to the protection of nuclear weapons and long-range missile programs so I just don't see any prospect of the North Koreans changing their policy position."

"The Trump administration's position is that de-nuclearization of the peninsula is necessary and they won't be happy with anything short of that."

For its part, Pyongyang has vowed to continue with its nuclear and missile tests to counter what it calls "US hostile acts" in the region.

© Sputnik / Michael Klimentyev
Japan’s Abe Hopes for Closer Ties With Russia, Dialogue on North Korea, Syria
On April 12, Trump declared he had sent an "armada" of ships led by the aircraft carrier USS Carl Vinson to the Korean Peninsula.

The US has also carried out joint exercises with South Korea and on Thursday said it plans to activate the THAAD missile defense system within days.

On Thursday, China proposed that Washington, Pyongyang and Seoul de-escalate tensions in the Korean peninsula, insisting that the US and South Korea must end joint military exercises and that North Korea, simultaneously, must halt all nuclear and ballistic weapons development.

To Pay or Not to Pay: Seoul in Hot Water as Trump Wants Hefty THAAD Bill